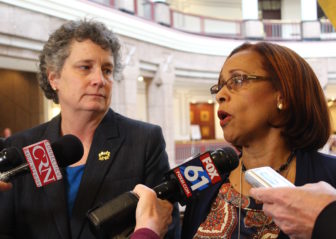 The Senate chair of the General Assembly’s budget-writing panel challenged her colleagues and Gov. Dannel P. Malloy on Thursday to ease the municipal aid cuts they are seeking — or watch one budget be rejected after another.

Sen. Beth Bye, D-West Hartford, said she fears many cities and towns already are making plans to increase property tax rates based on the state budgets proposed over the past week by the Appropriations Committee and by the governor.

“What we’re hearing from our members and from the House members is that the (local aid) cuts are too large,” Bye told The Mirror. “I’m afraid that just putting out these budgets is impacting local mill rates. Municipal officials simply don’t know what to believe.”

Rep. Toni E. Walker, the other co-chair of appropriations, said she is open to revisiting municipal aid, but noted that other areas of the budget, such as social services, have faced deep cuts over the past several years.

“We have to look at municipal aid because (reducing grants) is, in essence, a tax increase,” Walker said. “But I can’t promise anything. … We’ve gotten backlash from everybody about all parts of the budget. Nobody wants to be cut.”

Bye’s appeal comes just one week after the Appropriations Committee she leads recommended a budget for the fiscal year that begins July 1 that reduces both education and general government grants to municipalities by a total of almost $68 million below the level in the preliminary 2016-17 budget.

The West Hartford lawmaker also spoke out just two days after Malloy issued a revised 2016-17 proposal that dropped education and general government aid by a total of almost $145 million.

More importantly, Bye said, both plans also fund municipal grants below the level Malloy had recommended in his first budget plan of the legislative session, back on Feb. 3.

Since Feb. 3, though nonpartisan analysts have reduced their revenue projections for 2016-17 by more than $360 million.

But if municipal aid is cut at the levels proposed, she said, state officials would effectively be raising taxes by forcing cities and towns to boost local property tax rates.

“Towns act conservatively, that’s how they behave,” she said, adding that if state officials don’t assure community leaders sufficient grant levels will be approved, then local budgets — which must be resolved in the coming weeks — will likely include tax hikes. “And now they can’t see what’s going to come out of the Capitol. They are in a totally new environment.”

“CCM calls on the General Assembly to reject these deep cuts in state aid – proposed so late in the legislative session after many communities have approved their local budgets,” the conference wrote in a statement after Malloy’s plan was issued Tuesday, adding that local tax increases would be the alternative.

Bridgeport Mayor Joseph Ganim stopped short of guaranteeing a tax increase this week, but in a memo to his department heads he warned that “the potential impact of these cuts is devastating.  It more than doubles our expected budget deficit for FY 2017.”

Bye conceded that to balance the next state budget and to scale back the cuts in local aid below the level even her panel recommended would not be easy.

The Democrat-controlled Appropriations Committee came under heavy fire both from Malloy — who is also a Democrat — and from GOP lawmakers, because the plan was more than $340 million out of balance.

Representatives of the governor’s administration are expected to negotiate a final budget with legislative leaders in the coming days.

The Republican caucuses, who did not propose a budget this spring to close the deficit, are not expected to participate. GOP leaders argue that had Democrats embraced their calls for labor concessions when they first were issued in April 2015, they might have been achieved. State employee union leaders rejected that prospect then and continue to do so now, saying workers sacrificed plenty in 2009 and 2011 concessions deals.

Bye said Democratic leaders realize they must address the shortfall in their own plan to have any hope of easing the burden on towns.

“By the end of the legislative session we will have a balanced budget,” she said. “At the end, revenues will match expenses.”

Bye added she is optimistic that Malloy, who was mayor of Stamford from 1995 through 2009, also would be open to some alternatives to the deep cuts in municipal aid, noting that the governor shielded municipalities from any cuts — and even bolstered municipal aid slightly — during his first term as he inherited a record-setting state budget deficit.

“He’s been protecting cities and towns for five years,” she said.

The governor’s office did not rule out the prospect of revisiting municipal aid levels Thursday.

“If we are to put Connecticut on a better path for the long-term, then we need to make tough but necessary decisions now to adapt to our new economic reality,” he said.

“Of course, we have been tireless advocates for supporting our cities and towns however possible – our record speaks for itself,” Puglia added. “As a former mayor for more than a decade, the governor knows how important town aid is. We also know that we all will have to make tough decisions to live within our means, and that we cannot send more money than we actually have.

“We very much appreciate Senator Bye’s work on and commitment to these critical issues and we look forward to the work ahead.”