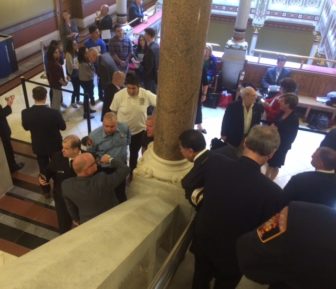 Firefighters came to the Capitol on Wednesday, but this time to thank legislators.

Firefighters left the State Capitol last year in a fury over the refusal of House leaders to call a vote on legislation providing them lost-wage coverage for work-related cancers. Just after midnight Wednesday, they watched a bipartisan compromise pass unanimously with the blessing of the municipalities that once thwarted them.

The story of the cancer bill is one of flexibility by the firefighters, who originally demanded an expansion of workers’ compensation coverage, and a willingness by the Connecticut Conference of Municipalities to negotiate what typically is left to collective bargaining.

“It’s been a work in progress since last legislative session, and CCM had promised me if we let the bill go last year, they would come to the table and work with us to get a piece of legislation that we all could get behind,” said Rep. Michelle Cook, D-Torrington, who led the negotiations. “We’ve done that.”

The result is a relatively modest relief fund to be used to pay lost wages of firefighters during their treatment for cancers that have been linked to the chemical fumes generated when the synthetics used in modern construction and furnishings catch fire. 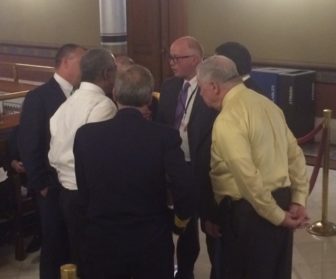 Rick Hart, center, huddling with firefighters and others over a last-minute glitch that was resolved.

It will be funded by redirecting one penny of the 51-cent surcharge on land-line and mobile telephone bills from a fund for the state’s 911 system. Those pennies are expected to generate $400,000 a year, and no benefits will be offered until the new fund collects the telephone revenue for three years.

The relief fund will be administered by firefighters. Eligibility requires evidence that the applicants do not smoke or use other tobacco products and that they are trained in the latest cancer-prevention techniques for fighting interior fires.

Connecticut is the only state in New England and one of about 14 nationally without a legal presumption that at least some cancers in firefighters are job-related, meaning the burden in those states is on employers to show the cancer had another cause.

The municipalities said the cancer bill, by presuming that cancers are job-related, resurrects the similar heart-and-hypertension benefit, which presumed that all heart disease for public safety workers was job related. The presumption was later discredited and repealed, though towns still are paying claims awarded before repeal.

A single cardiac claim could cost a town $500,000 to $1 million, according to the legislature’s Office of Fiscal Analysis. The office was not able to fully estimate the potential cost of the cancer benefit if it were added to the workers’ compensation system.

Cook, a Democratic deputy majority leader who had a constituent with cancer, convened negotiations with several Republicans, including Rep. David Rutigliano of Trumbull and Sen. Tony Hwang of Fairfield, the ranking Republicans on the Labor and Public Employees Committee.

Rick H. Hart, political director of the Uniformed Professional Fire Fighters Association of Connecticut, which represents 4,000 paid firefighters in the state, said the union recognized that expanding workers’ compensation would remain a difficult sell at the Capitol.

Talks originally centered on expanding disability insurance, believing it would be cheaper and more predictable than workers’ compensation. But union data on its members showed that such policies would be prohibitive: An estimate for covering just firefighters in Hartford was well over $500,000.

“Nobody threw up their hands in the air and walked away,” said Joe DeLong, the executive director of CCM.

“Every time we came to a roadblock, we worked our way around it. We addressed our concerns, the municipalities’ concerns, the state’s concerns,” Hart said. “Everybody wins, I think. But most of all, firefighters in Connecticut win. Now they don’t have to worry about losing their insurance, losing their house.”

“This should be a model for how legislation is done in this building,” said House Minority Leader Themis Klarides, R-Derby.

“Working together should be the model we follow for the next two weeks,” said House Majority Leader Joe Aresimowicz, D-Berlin.

The session ends at midnight May 4.

Passage was delayed one last time when the administration of Gov. Dannel P. Malloy raised a concern Wednesday about the loss of federal grants for 911 systems if money from the 911 fund were diverted.

The bill was amended to delay implementation until Feb. 1, 2017, giving state officials time to ensure no federal grants would be jeopardized.