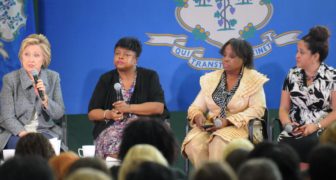 Gov. Dannel P. Malloy was reminded Thursday there is no escaping the budget crisis, not even at a presidential campaign event: A Sandy Hook mother gently called him out in front of Hillary Clinton and the national press for cuts he is making to mental health and social services.

Nelba Marquez-Greene, whose 6-year-old daughter, Ana Grace, was among the 20 children killed at the school in Newtown, was on a stage with Clinton in the North End of Hartford when she addressed Malloy, a Clinton supporter sitting at the front of the audience.

“I’m concerned about our mental health programs and the devastating cuts that are happening right now as we speak,” said Marquez-Greene, one of five panelists at a Clinton campaign event on gun violence in a crowded YMCA gymnasium.

The audience of several hundred applauded. 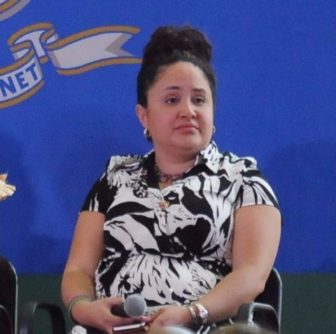 “Gov. Malloy, I know your job might not be easy, and you have to make really hard choices,” said Marquez-Greene, a social worker and licensed marriage and family therapist. She offered to work with him, then added, “I’m concerned about the deep cuts to social services.”

Marquez-Greene recalled their conversation at Newtown High School after the shooting, when Malloy and President Obama met privately with the families of the victims before a public memorial.

The governor has proposed cutting $34.5 million from the state Department of Mental Health and Addiction Services – a number nearly three times greater than what his commissioner indicated could be cut while preserving the safety net clients rely on. He also proposed nearly $16 million in cuts to grants for mental health and substance abuse treatment.

The administration says spending on mental health still would be about 7 percent higher than it was in the 2012 fiscal year.

Malloy’s reaction was not visible from the press section in the rear of the gym. His spokesman, Devon Puglia, declined to comment on her statements.

Sen. Beth Bye, D-West Hartford, a friend of Marquez-Greene who has a major budget role as co-chair of the Appropriations Committee, could see Malloy and said the governor gave a measured reaction.

Bye said the governor didn’t fare too badly at the Clinton event.

Clinton praised him for his leadership on winning passage of gun-control legislation after Newtown that banned some weapons and required universal background checks for the purchase of firearms and ammunition. Iran Nazario, a panelists who did time in prison thanked him for his efforts to give offenders a second chance.

“Here was Hillary Clinton in Hartford talking about the progress Connecticut’s made on guns and second chance opportunities,” Bye said. “I felt like on average it was a good day for Connecticut and the governor.”