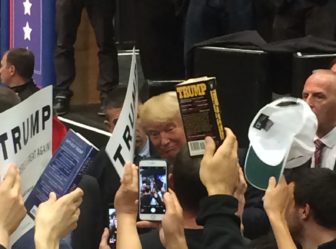 Waterbury – One thing was clear Saturday: Donald J. Trump didn’t come to the Center of the Universe, this city’s defiant if ironic slogan, to pivot or go soft. He says it’s still him against Crooked Hillary Clinton, Lyin’ Ted Cruz, a dishonest media and a rigged political system.

The brash billionaire mocked calls by his own wife to be presidential. He walked back suggestions by his new chief strategist, Connecticut’s Paul J. Manafort, that a deeper, gentler Trump was about to emerge as he edges closer to the Republican presidential nomination.

Not happening, not now.

“If I acted presidential, I can guarantee you this morning I wouldn’t be here,” Trump told a capacity crowd of more than 3,000 at Crosby High School, where others stood outside, listening to audio provided for the unlucky.

He started in a huge Republican field, squeezing out all but two rivals, Sen. Ted Cruz of Texas and Ohio Gov. John Kasich. He eliminated them like he still was hosting his old reality show, The Apprentice, where he winnowed the contestants for a management job over the course of a television season.

Trump mugged. He adopted a Mr. President voice, solemnly nodded his head, glanced left and right at imaginary teleprompters and imitated a conventional politician, “Ladies and gentlemen, it’s a great honor to be with you this morning.”

“It’s very easy to be presidential,” he said.

He even played off the image of Thomas E. Dewey, once mocked as “the little man on the wedding cake.” Dewey was the loser in one of the great presidential upsets, losing to the rough-hewn Harry S Truman, who gave ‘em hell and threatened to punch a journalist who gave his musical daughter a bad review.

“Dewey was very presidential. If you looked at him, he had the whole deal,” Trump said. Then Trump gave the crowd a put-upon, hey-what-about-me-look and dropped a well-timed aside, “I think I look presidential, don’t I?”

The crowd screamed in agreement.

He mocked Kasich, who told a much smaller audience Friday at a high school gym in Glastonbury that he was the only electable Republican among the last three candidates in the race: him, Trump and Cruz. Trump says it is really a field of two – him and two opponents who together barely add up to one decent opponent, “a half and a half.”

“I don’t know how you pronounce his name, Kasich,” Trump said, incorrectly pronouncing Kasich as rhyming with witch, not sick. “Can we ask him to change the spelling of his name?”

It was what the crowd wanted to hear.

The bikers from the Fat Bastards Social Club, they praised him as “authentic.” The public school teacher from Torrington, who switched parties, says the showmanship works. His Republican buddy thinks the bigger-is-better Trump is a plus to the party’s down-ballot candidates, not a liability. Crosby’s basketball coach says the Grand Old Party will adjust to Trump, not the other way around. 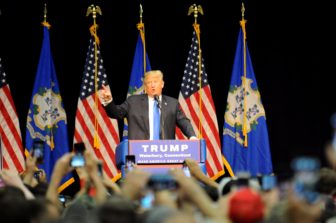 Donald Trump asks if he is presidential enough.

The scoreboard in the gym showed Trump winning, 28-0. Connecticut has 28 delegates to the Republican National Convention in Cleveland.

On the weekend before primaries in Connecticut and four other northeastern states, Trump stuck closely to what’s worked, delivering a meandering speech that circled back on itself, diverting for random asides about his daughter or his health.

“I actually have low blood pressure. Can you believe it?”

Maybe Trump decided that pivoting in Waterbury was too dangerous. It’s home to one of the state’s worst traffic interchanges, funky downtown traffic patterns and a long history of bare-knuckle civic life and line-blurring fusion politics. It’s a city that’s hurting, angry and ready for something new.

He left here for another rally in Bridgeport. 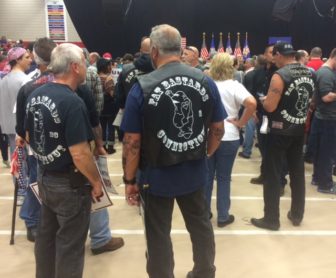 Toni DeStefano got up at 3 a.m. for an event that didn’t start until 10:30 a.m., but the doors opened at 7 a.m. She left hungry and happy, clutching a red TRUMP baseball cap with the candidate’s autograph on the bill.

The city’s Democratic mayor and former police chief, Neil M. O’Leary, was chatting with security in the lobby of Crosby, a school that replaced its downtown namesake decades ago. A surprise endorsement, perhaps?

But others saw a cross-over appeal in Waterbury, an aging industrial city that Bruce Springsteen could sing about, a place where the brass mills went away a long time ago, and they’re not coming back.

Trump nearly forgot his local talking points. He tacked them on at the end of his hour-long, non-linear exploration of the 2016 campaign, the state of the economy, the need for a wall on the border with Mexico, the coolness of Louisiana, the essence of success, the art of the deal.

“I was supposed to do this at the beginning,” he said, then reeled off some familiar statistics, such as the number of manufacturing jobs shrinking by 60 percent over the past 16 years. “Sixty percent? That’s bad.” 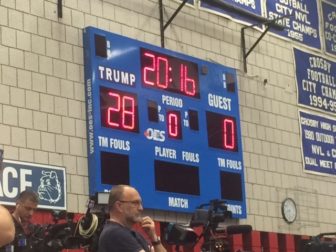 Trump was the home team. Connecticut has 28 delegates.

Even 32 years ago, when Ronald Reagan carried the Naugatuck Valley and the rest of Connecticut, blue-collar Democrats here were willing to look to the GOP for a more hopeful message on the economy.

Rep. Tony D’Amelio, R-Waterbury, welcomed the crowd from the stage, using the same slogan that a favorite son, former Gov. John G. Rowland, was fond of using: “Welcome everyone to Waterbury, the center of the universe.”

So did his next line.

“I’m proud to be the first state representative to endorse Donald Trump for president,” D’Amelio said.

In the crowd there were converts like Bruce Harrison, 35, of Torrington, a public school teacher who says he was “born a liberal.” He switched registration from Democrat to Republican last fall at the urging of a buddy, Chris Diorio, 33, who came home from the military and got involved in GOP politics.

They ignore some of Trump’s outlandish comments, the stuff he seemed to learn on reality television and brought on the road. It may be shtick, but it’s bringing people out, including guys back home uninterested in politics.

“I enjoy him for his showmanship,” said Harrison, who managed to find a vintage “Reagan-Bush” t-shirt for the event. “I think that it’s brought people into the fold.”

They were unconcerned about polls showing Trump with high unfavorables, surveys showing him losing November matchups with either Hillary Clinton or Bernie Sanders.

Diorio, now a member of the Board of Finance in Torrington, is betting there is only upside. He lives in a state House district where close races are the norm in mid-term elections, but the Democratic margins swelled during the presidential years of 2008 and 2012, when Barack Obama topped the ticket.

“We’re hoping Trump brings a movement,” he said. “The Republican Party is stagnant.”

Nick Augelli, the varsity basketball coach at Crosby for 36 years, an assistant for a decade before that, watched approvingly as the gym named for him – its new playing surface was protected with brown paper over plastic — filled with people excited about politics.

“The country needs change,” he said.

Augelli, a Republican, is no stranger to politics. His father was a state senator and he served on the city’s Board of Aldermen, including a term as president. He was with Cathy Awwad, who was chief of staff to a GOP mayor who oversaw the city’s slide into receivership, then went to prison on shocking child-sex charges.

“I think much – not all, but much – of what he is saying is what people need to hear. He’s talked about NAFTA, the trade deals, ” Awwad said of Trump. “He talks about society, how everybody gets a trophy. We’ve become a society of people who expect and demand instead of earn.”

Mark Lyons and his wife, Ling Noonan, stood on the floor in the mosh pit near the stage. Noonan swayed to the music played as they waited for Trump, an odd mix of opera, Creedence Clearwater Revival and the Rolling Stones.

Her husband is a local guy, a 1976 graduate of Crosby, back when it was new. He’s had it with politics. His view of the profession is colored by a belief that his favorite show, “House of Cards,” the deeply sinister take of Washington on Netflix, has flashes of truth.

He shrugged when asked if Trump were ready to be the leader of the free world.

Trump would be beholden to no one, he said.

“Hillary, the others would be more of the same, do what the party tells them,” he said. “Take a chance. What do you have to lose? If it doesn’t work, in four years someone else will be elected.”

The Fat Bastards Social Club was represented by eight guys of a certain age and uncertain number of tattoos, most wearing black motorcycle leathers with a club logo professing a love for mom and motorcycles.

He laughed again as one of his buddies made sure to emphasize that the Fat Bastards was a social club, not a motorcycle club or biker gang.

“We are a social club organized around similar interests – bikes and women,” Pasquariello said.

He laughed and nodded his head. 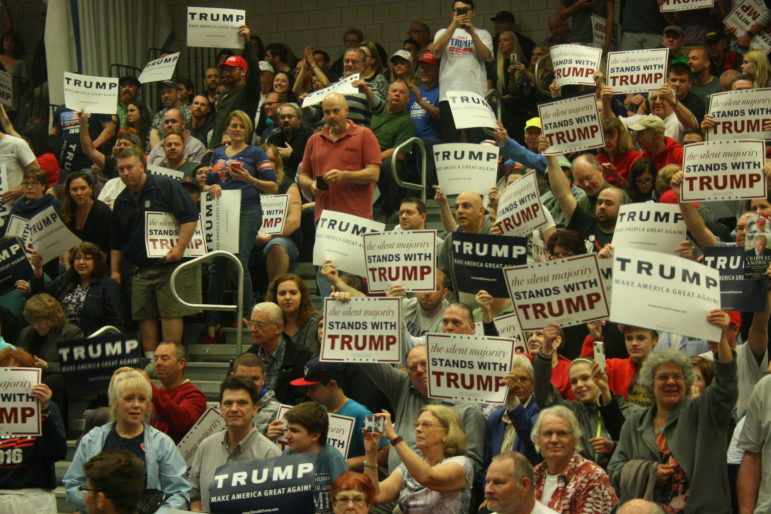