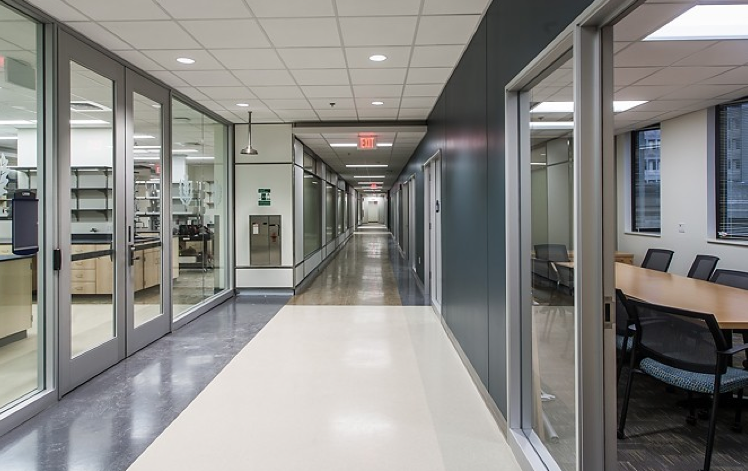 First story of a three-part series.

Declines in research activity and grant funding at the University of Connecticut Health Center are weighing down the university’s overall national ranking for research, despite massive public investment in the school.

As a whole, UConn’s ability to attract outside grants has grown at a snail’s pace over the last 10 years despite infusions of funding from the state and from student tuition to build new labs and hire additional faculty. The results have been very different at the main campus in Storrs and the Health Center in Farmington, however.

During the 2004-05 school year, the university, including its health center, ranked 64th among all public and private universities in research spending, a key measure watched by academics nationally to gauge a university’s research activity. By the 2013-14 school year, the school was in 82nd place in the annual rankings published by the National Science Foundation, though nine of the schools ranked better than UConn had not been included in the previous rating. Among public institutions, UConn ranked 54th for the $258.1 million it spent on research two school years ago.

Last fiscal year, UConn spent $259.4 million, which means increases in research spending have matched inflation over the last 10 years with a meager average annual increase of 1.6 percent, or $3.6 million.

An examination of UConn’s research efforts over the last decade shows that:

The stagnation in research revenue is particularly important because it is intended to be one of the main mechanisms for reducing the university’s reliance on funding from the state.

UConn says the investment in the Health Center eventually will pay off in increased outside funding for research, but in a difficult financial time for the state, some legislators are becoming impatient.

“All we hear from them is we need more money. But there have been huge investments into UConn from the state,” Sen. Danté Bartolomeo, D-Meriden, co-chair of the legislature’s higher education committee, said during an interview. “Those investments should be a seed. We want to know what’s their plan to begin relying less on the state. The last thing I want to hear is an institution that has received such heavy support come before us and say they need more money or things are going to fall apart.”

With the legislature crafting a state budget this year that is not expected to keep up with UConn’s growing expenses, President Susan Herbst raised the specter of decline in February if state funding declines for several years.

“I am talking about closing campuses, closing schools. I am talking about nursing, education, law, social work. You know, this is the kind of thing we have come to, and it’s grim,” Herbst told the legislature’s budget-writing committee.

Operating funds for UConn programs other than UConn Health increased by $165.9 million over the last 20 years to just under $400 million this fiscal year, an average annual increase of 4.5 percent. Similar increases were funneled to UConn Health to help cover its salaries and other operating expenses. 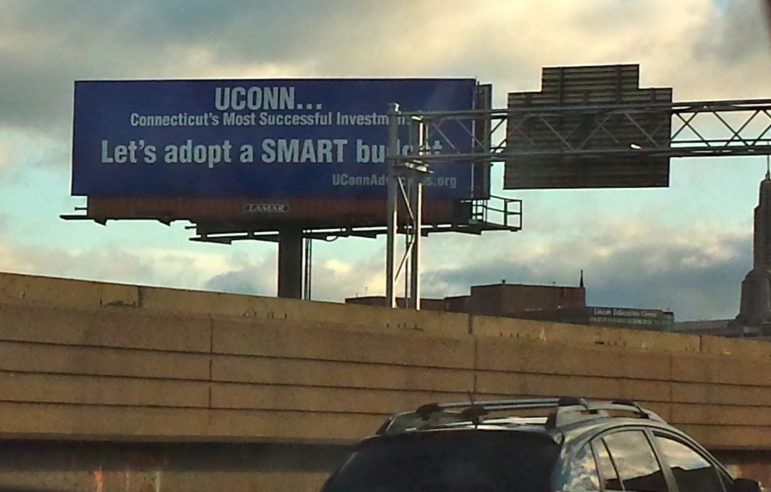 A billboard greeting drivers on I-84 in Hartford right before the exit for the state Capitol.

Tuition and fees have nearly tripled during this time, and UConn now gets one-third of its revenue from students, a $365 million boost in revenue for the university over the last two decades. The state’s share of UConn’s budget has dropped from 43 percent two decades ago to 30 percent today.

Additionally, the state has spent $2.7 billion over the last 20 years renovating and building research labs and other buildings at UConn and the Health Center, and the university is slated to receive hundreds of millions more over the next several years.

“I want to thank you for your tremendous contributions that have transformed the institution and have created a top flagship university,” UConn Provost Mun Choi told the legislative committee that oversees construction projects recently.

The investment has helped boost a ranking regularly cited by UConn – the U.S. News & World Report grade that places UConn in 19th place among public universities. But that survey does not factor in research activity.

UConn and its Health Center have launched a number of initiatives over the last two decades that were sold as ways to boost the schools’ stature and its economic benefit to the state.

The most recent include the $2.4 billion for “Next Generation Connecticut,” passed by the legislature in 2013 to build and renovate facilities, to raise enrollment and to increase research at Storrs and the university’s undergraduate branches.

In 2011, $864 million was approved for “Bioscience Connecticut,” an initiative to improve clinical care at UConn Health by renovating its existing hospital and building a new patient tower and lab space. At the time the university said it would help double research spending at the health center. A $291 million package to help The Jackson Laboratory build a genomics institute on UConn’s Farmington campus also was approved in 2011.

“The creation of a strong public research university is critical to ensuring our long-term economic competitiveness,” Gov. Dannel P. Malloy, a Democrat, told the legislature in his State of the State speech when proposing Next Generation. “My proposal is that we get Connecticut and UConn back in the game in a big way.”

With much of the new and improved research space now complete, UConn officials are urging patience, saying increases in research activity at UConn Health will follow. Construction for additional research space is also in the works.

“It’s a longer-term benefit from a research perspective,” Dr. Andrew Agwunobi, the chief executive officer of UConn Health, responded earlier this month to legislators who were questioning when the state’s investment would pay off.

UConn officials also point to a recent study commissioned by the university highlighting the impact the school has on the state’s economy.

“One out of every 68 dollars in the state’s economy is attributable to UConn,” said the study completed by Tripp Umbach, a Pittsburgh-based consulting firm.

New labs, but not enough money for faculty

As new and renovated labs open, however, UConn officials are warning legislators of the impact that cutting or flat-funding the university will have.

When the General Assembly passed Bioscience Connecticut and Next Generation, UConn officials estimated that the state would need to funnel millions more to the university so staff could be hired to do research and teach the influx of additional students.

For example, UConn’s Next Generation proposal asked for a $17.4 million increase in funding from the state for UConn’s 2014-15 operating budget over the year before. In return, UConn promised to boost research spending at Storrs by $43 million by 2015.

UConn’s funding actually  increased by $19.6 million between 2014 and 2015, the state Comptroller reports, while research spending increased by $3.9 million.

While the governor is not recommending scaling back construction at UConn or the Health Center, university officials are bracing for cuts to their operating budgets as legislators work to close a widening budget shortfall.

And UConn has told legislators not to expect external research funding to fill the gap.

For example, Jeff Seemann, UConn’s vice president for research, said, “Research grants cannot be used to subsidize the operations of the hospital. They are really fire-walled in that regard,” he said. Only that portion of a faculty member’s time devoted to research can be compensated for with research grant money.

During an interview Seemann likened the situation to building a car and not paying for the gas so it can start.

“We are being starved for the operating money that’s necessary to keep it going. We have to somehow now grow research without having the gasoline for the engine,” he said. 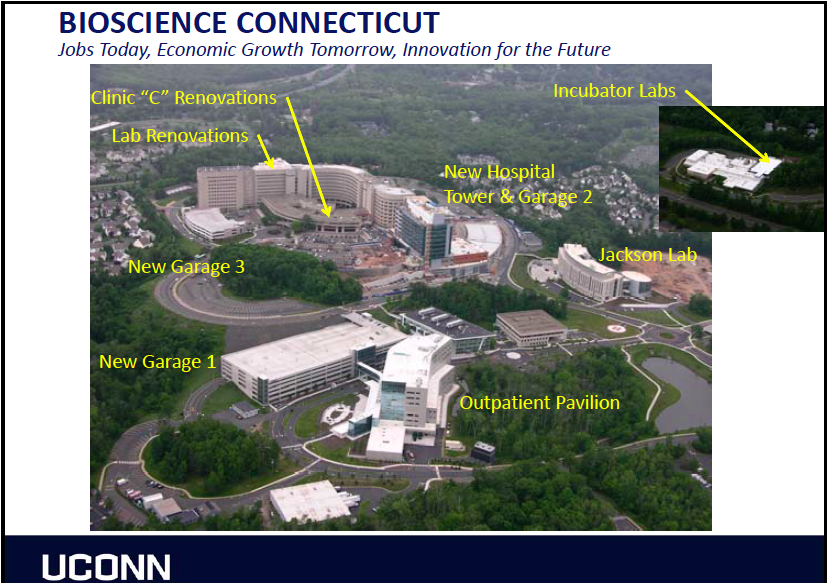 It seems some legislators are hearing the pleas, and a bill backed by the leader of the state Senate would put $5 million in bonding on the state’s credit card for the university to hire faculty for its entrepreneurship program and to make up to $60 million in forgivable loans to companies that make investments exclusively in intellectual property and startups developed by students, faculty and researchers from UConn.

“This bill will help UConn build on the tools given to it through Next Generation and Bioscience Connecticut,” Seemann said when he testified in support of the bill in March.

At the same time, however, the state’s Finance, Revenue and Bonding Committee has proposed delaying some construction because the state’s state’s credit card is facing a spending limit and legislators want to cancel some borrowing to create space for other projects.

“You are doing a lot of building,” said Rep. Elizabeth A. Boukus, D-Plainville, the House chair of the bonding subcommittee of the Finance, Revenue and Bonding Committee. “We may need to reconsider some UConn bonding. I would really encourage you to go back, find us some money that isn’t going to be spent, and help us.”

It’s frustrating for some legislators to hear UConn needs more money as they grapple with having to cut funding from other state agencies that care for the poor and disabled to close the state’s deficit, approaching $1 billion in the fiscal year that begins July 1.

“You all have the opportunity with the structure and setup, and where you are going in research, to have the additional funding coming in, an opportunity that so many of our agencies sitting before us don’t have. I am getting really concerned hearing that you don’t ever see yourselves getting to the point where, unless we give you more money, you are going to continue to have losses,” Bartolomeo told UConn officials this month. “At what point is this investment going to start to defray the costs that you have. We’re hearing the payoff has been phenomenal in some areas. I just really need to know where that’s going.”

Coming Tuesday: In recent years, it’s gotten much more expensive to hire research staff at UConn because of the state’s huge unfunded pension liability and changes that allowed more staff to join that system.

On Wednesday: The Mirror dissects the data on research at UConn in a series of charts that show where it’s thriving and where it’s struggling.

The spike in COVID infections elsewhere is expected to complicate testing in Connecticut.