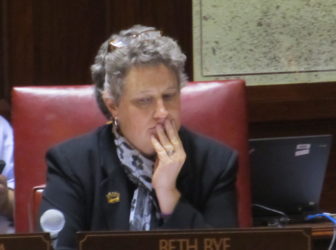 By mid-day Tuesday, earlier indications that income tax receipts might be on the rise – based on very preliminary data after the April 18 filing deadline – had evaporated.

The legislature’s nonpartisan Office of Fiscal Analysis now is projecting income tax receipts for April will be $41.2 million below previously budgeted levels.

Final income tax projections won’t be completed until April 30 and the number has, in years past, varied greatly day-to-day.

Still, with income tax receipts tracking in the red for now, legislators might be wary of approving any budget based on current projections knowing they could worsen — and leave their plan out of balance — in just a few days.

And while Bye said, “I wouldn’t anticipate a (budget) vote on Wednesday, … we’re still trying to get a deal on a budget as fast as we can.

Leaders of the Democratic majorities in the House and Senate said last week that they hoped to adopt a budget for the 2016-17 fiscal year by Tuesday or Wednesday of this week.

That looked less problematic at the time.

State income tax receipts for April are a crucial tool fiscal analysts use to forecast how Connecticut’s single-largest revenue source is likely to perform in the coming years. The income tax is expected to raise more than $9.3 billion this fiscal year, providing nearly half of the revenue needed to support the entire state budget.

On April 21, just three days after the filing deadline, income tax collections for April were running almost $200 million ahead of budgeted levels.

If that number held up, analysts also probably would have added about $200 million to their projected income tax receipts for the next two or three years. That would have represented good news on several levels.

The budget that ends June 30 is $141 million in deficit, according to the Gov. Dannel P. Malloy’s administration. A $200 million jolt in income tax receipts would eliminate this problem.

The 2016-17 budget, which has a built-in hole of about $930 million, similarly would have seen that problem shrink by about $200 million — if those early projections had remained unchanged.

And the $2.1 billion deficit analysts are projecting for the fiscal year that starts July 1, 2017 would have been shaved down by around $200 million as well.

But by Tuesday, the nearly $200 million gain had dropped to a projected $41 million shortfall, potentially worsening the budget deficit this year, and the projected shortfalls in the years to come.

More importantly, it has now been more than a week since the tax filing deadline. Traditionally, the numbers do not fluctuate as much after that point.

Democratic legislative leaders, who have been at odds with Malloy over funding for municipal aid, hospitals and social services, are trying to craft a budget for 2016-17 without negotiating with the Democratic governor.

Malloy spokesman Devon Puglia said Tuesday the new revenue challenge only highlights the need for both branches to work together, rather than planning a budget vote before all financial data is available.

“We’ve always maintained that the revenues could decline further – that’s the scenario for which we should be planning,” Puglia said. “Instead of crossing our fingers and hoping that difficult decisions won’t have to be made, we should be collectively working together by having conversations about how to fix this problem without raising taxes and without raiding the rainy day fund. At this point, we’ve put out not one, but two balanced budgets on the table as we’ve led conversations about how to best approach the challenge before us, and as always, we stand ready to meet with anyone who has developed a full plan.”