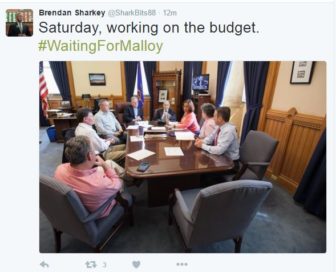 House Speaker J. Brendan Sharkey’s tweet on the final Saturday of the legislative session captured the mood between his caucus and the governor.

State budget talks continued to stall Saturday as Gov. Dannel P. Malloy’s administration and Democratic legislative leaders remained at odds over how to resolve a nearly $1 billion shortfall in the fiscal year that begins July 1.

And though talks — which bogged down late Friday — remained in limbo, Democratic legislative leaders insisted they are ready to resume talks with the governor at any time.

Still, both sides in the standoff concede time is running short as the General Assembly nears its constitutional adjournment deadline of midnight on Wednesday.

“We are absolutely still ready to talk,” Sen. Beth Bye, D-West Hartford, co-chair of the Appropriations Committee, said around 3 p.m. Saturday. “We’ve said we will go over the budget line by line.”

But House Speaker J. Brendan Sharkey, D-Hamden, couldn’t resist poking at the governor, tweeting a picture of Democratic legislative leaders discussing the state budget while sitting around a conference table with two empty chairs — presumably saved for the governor’s representatives.

Devon Puglia, the governor’s spokesman, quickly responded on Twitter with, “We are waiting for actual, sustainable spending reductions.”

That was Malloy’s message late Friday night when he called reporters into his Capitol office and predicted that budget talks were “hitting a wall” and unlikely to produce agreement between both branches before the regular session ends.

The problem, the governor said, is that the Democratic majority won’t consider enough spending cuts to stabilize finances in the long-term. A Democratic budget unveiled Thursday relies on hundreds of millions of dollars in fund sweeps and revenues from other one-time sources.

“People are treating this simply as a revenue issue when in fact it’s a revenue issue and a spending issue,” the governor said Friday. “We can talk about where to identify one-time revenue, but unless you’re going to address the spending side of the equation, which I have done repeatedly, then it makes it impossible to get to a budget that I could support.”

Though Malloy refused to discuss details of the closed-door talks, multiple sources close to the negotiations said the governor and Democratic legislators were hundreds of millions of dollars apart in terms of programmatic reductions and other spending cuts that would save money year after year.

Sources also said Malloy has offered to reduce funding for the biggest initiative of his second term: his 30-year program to rebuild Connecticut’s transportation infrastructure.

The governor also said that Democratic legislative leaders weren’t interested in negotiating if a deal weren’t reached by noon Saturday. But Senate President Pro Tem Martin M. Looney, D-New Haven, said leaders set no deadline, but only were explaining that it takes several days, procedurally, to prepare a budget bill for a vote after a tentative deal has been struck.

Leaders of the Republican minorities in the House and Senate have said neither the governor nor Democratic legislators have gone far enough to curb state spending.

The stakes are huge, Senate Minority Leader Len Fasano, R-North Haven, said, noting that while the $960 million deficit in 2016-17 is imposing, the $2.2 billion-plus deficits nonpartisan analysts are projecting for 2017-18 and 2018-19 are a nightmare unless they’re addressed now. “There is no vision about how to get rid of these (larger) deficits,” Fasano said.

But when it comes to at least recognizing this problem, Fasano added, Malloy has done a better job than his fellow Democrats in the legislature. “I am convinced in my mind, without a doubt, that this governor gets it,” he said.

Both Bye and Sharkey took issue with the governor’s characterization of Democratic legislators’ position on the budget.

State spending in several key areas, including social services, health care and education, has been subject to heavy cuts for the past two years, Bye said, adding that many officials underestimate the cumulative impact of these reductions.

The $19.73 billion budget Democratic legislators have offered spends about $1.6 billion below the level needed to maintain current services.

By comparison, when Malloy and legislators closed one of the largest deficits in state history in May 2011, their solution, which also included tax increases, fixed General Fund spending at $1.36 billion below the current-services level.

But that plan benefitted from union concessions, which provided half of the necessary General Fund savings. This time around union leaders say workers, who also provided concessions in 2009, won’t grant them again.

“There are real and substantial cuts in the Democrats’ proposal,” Sharkey said Saturday. “There are savings that will roll over year after year.”