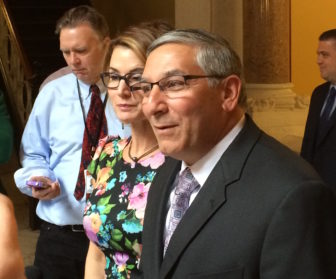 The top Republican in the state Senate charged majority Democrats in the legislature with keeping most crucial details of their new budget for 2016-17 under wraps.

House and Senate Democrats, who unveiled a $19.73 billion budget Thursday, still have not allowed nonpartisan fiscal staff to release the assumptions and other details used to calculate the projected savings in that plan, Senate Minority leader Len Fasano, R-North Haven, said.

“If you’re not going to give out the backup, one must conclude that they use some extremely fuzzy math,” Fasano said, adding Democrats cannot fairly claim to have released their proposal without providing access to supporting data.

Senate Democratic Caucus spokesman Adam Joseph released a brief written statement, saying that, “We have never embargoed any number or assumption we have publicly released.”

House Speaker J. Brendan Sharkey, D-Hamden, did not dispute Fasano’s claim, but said it was irresponsible of the GOP leader to criticize the Democratic budget if he felt he needed more details. “Five minutes after we produced our budget plan, Len Fasano was trashing it,” the speaker said.

But Fasano said he and House Minority Leader Themis Klarides, R-Derby, cleared nonpartisan fiscal staff to release details and assumptions behind the Republican budget alternative on April 25 — the same day the GOP unveiled its budget.

Klarides said, “Just consider the way in which the Democrats released their budget: in a crowded, noisy hallway where no details were provided, either verbally or in written form, and where leaders abruptly walked away in the middle of a reporter’s question.” She said Republicans spent 45 minutes explaining their budget.

Fasano said his staff already has identified several areas of concern in the Democratic plan.

For example, in one area, paperwork the Democratic legislative leaders released asserts that $104 million in state sales tax receipts will be available next fiscal year to implement one of the party’s biggest initiatives: capping property taxes in motor vehicles in about 50 municipalities with the highest rates.

Yet other portions of the budget appear to reduce sales tax revenue-sharing by about 25 percent. Is the car tax freeze program fully funded, or reduced, Fasano asked?

Democrats also plan to make $12.6 million available next fiscal year from the sale of property at the University of Connecticut’s West Hartford branch. But according to a memo released Friday by the university, the state still owes $6 million in debt payments on financed capital improvements.

“Federal tax-exempt bond rules require that proceeds from the sale be used to either repay those bonds, or fund $6 million of other capital projects – again, not operating expenses,” the memo states. Does the Democratic budget take this legal requirement into account?

Fasano said he believes details are being withheld because Democratic leaders fear their own members will not support the budget otherwise.

“I don’t know why the Democratic rank-and-file isn’t outraged,” he said.