Outside budget spotlight, one of Malloy’s key bills languishes 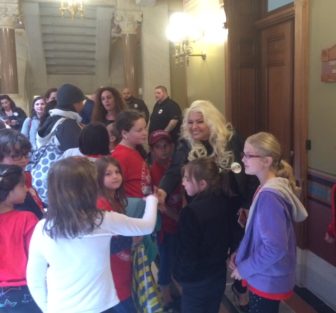 Beth Chapman, who starred with her husband, “Dog the Bounty Hunter,” in a reality TV show, greeted visiting school kids at the Capitol. She was lobbying Monday against bail reform.

Lost in the wrangling over the budget is that some of Gov. Dannel P. Malloy’s priority criminal justice bills, as well as smaller issues of importance to state agencies, are stuck on the House and Senate calendars, some for leverage as the adjournment deadline of midnight Wednesday fast approaches. One appeared to lack the votes for passage.

“Any time we have negotiations going on – in this particular case, it happens to be the budget – our leverage in part is having bills on the calendar that either agencies or the administration want,” said House Majority Leader Joe Aresimowicz, D-Berlin. “It’s not a secret. That’s how we’ve always done it here.”

Aside from his top priority of revisions to balance the second year of the biennial budget, Malloy’s wish list includes a reform of the bail system as part of “An Act Concerning a Second Chance Society,” a nationally watched proposal to raise the age of juvenile justice jurisdiction from 17 to 20.

The Senate was expected to pass the Second Chance bill Monday and send it to the House, but Monday ended without the bill being called, a sign the Democratic majority may lack the votes.

“I believe we’ll have the votes when we call the bill,” said Senate Majority Leader Bob Duff, D-Norwalk.

The bail industry seemed to concede in March that, at a minimum, the administration would succeed in barring bail for most misdemeanors. A more controversial element of his proposal would have encouraged judges to free defendants on 10 percent cash bonds, payable to a state-administered fund, not bail agents. That will be stricken from the bill in an amendment.

But Beth Chapman, who starred in a reality-television show with her husband, “Dog the Bounty Hunter,” was at the Capitol trying to kill the entire bill Monday, saying even the misdemeanor changes could endanger the public. She is president of a national association of bail agents.

The Senate did give final passage Monday to another of the governor’s criminal justice bills: a measure that requires the subjects of temporary restraining orders in domestic violence cases to surrender their firearms. 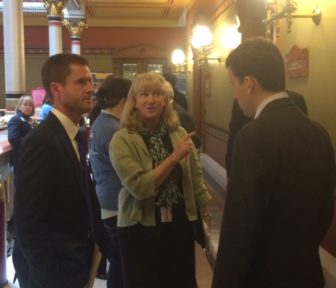 The Senate’s unanimous passage Friday night of a bill sought by Dominion Resources, the owner of Millstone Nuclear Power Station, to change the rules for procuring electricity, ignited a lobbying war over the weekend.

Environmentalists and competing energy companies mobilized, complaining that the Senate adopted complex regulatory language that never was subject to a public hearing. They complained it “stacks the deck” in favor of nuclear power.

It was unclear if the House would take up the Millstone bill.

The three-day sprint to the finish of every annual session is an exercise in traffic management, hard bargaining and, at times, what appears to be the unapologetic exchange of hostage legislation between the House and Senate.

“A lot of bills are held for ransom, if you will, because people have priorities. They want to make sure their priorities pass,” said Sen. Kevin Witkos of Canton, a deputy leader of the Republican minority.

The Republican minority steps to the fore in the final days, able to influence the agenda by simply being willing to prolong debates when time is short.

On Thursday, the GOP blocked a surprise effort in the Senate to pass a bill raising the minimum wage to $12 by Jan. 1, 2020. When Senate Minority Leader Len Fasano, R-North Haven, signaled a willingness to talk through the night, Democrats suspended the debate without a vote.

It is also a time of year when disparate bills become entangled. In 2013, House Republicans blocked passage of an early-childhood education bill after Senate Democrats refused to pass legislation legalizing Sunday bow-hunting of deer.

On Monday morning, there were 272 bills that had passed one chamber. The House had 126 Senate bills on its calendar, while the Senate held 146 House bills.

The overall volume and pace of business is down. Only a couple dozen bills have cleared both chambers, most in recent weeks.

The only bill Malloy had signed into law before Monday was a bipartisan bill passed on March 29 to reduce the current-year deficit. He signed three others later in the day.

Witkos said he expected House Democrats to attempt to pass a budget bill Tuesday, meaning there would not be time for other bills to get called for a vote

“Chances are there’s going to be a lot of angst around the building,” Witkos said at midday Monday. “People will be excited about what’s happening to their bills.”