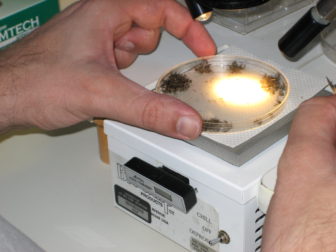 Pending cuts to state funding for mosquito control could pose a problem for the agency that monitors the insects for the Zika virus and other diseases, the director of the Connecticut Agricultural Experiment Station said Friday.

“It’s really not adequate for us to do what we want to do,” Theodore G. Andreadis said after a press conference with Gov. Dannel P. Malloy on the Zika virus.

But Malloy said money necessary for screening and testing mosquitos would be made available, whether in the budget or not.

The budget deal reached this week by the Malloy administration and Democratic legislative leaders would cut funding for mosquito control at Andreadis’ agency from $507,516 to $446,779 for the upcoming fiscal year – a 12 percent decrease. Legislators are expected to vote on the budget during a special session next week. 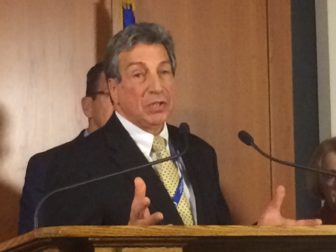 Andreadis, who said the funding issue had been flagged with those involved in developing the budget, said his agency might need to hire seasonal staff and purchase more specialized traps. Although the mosquitoes that are most common in Connecticut do not transmit Zika virus, Andreadis said the virus was recently detected in Mexico in another species, the Asian tiger mosquito, that is found in coastal Fairfield and New Haven counties.

Speaking Friday at the Hispanic Health Council in Hartford, Malloy, Andreadis and Public Health Commissioner Dr. Raul Pino urged residents to take precautions to avoid the Zika virus, which has spread through Central and South America and the Caribbean, and has been linked to birth defects.

There have been 426 cases of Zika virus reported in the continental U.S., all related to travel, according to the state Department of Public Health. In Connecticut, there have been four confirmed cases. Malloy said more cases are expected in the state as travel ramps up during the summer.

The virus is primarily spread through mosquito bites, but can also be sexually transmitted. Connecticut officials said they expect the cases that occur in the state to be related to travel or sexual transmission.

The state health department is planning to have flyers about the virus distributed to people boarding flights from Bradley International Airport to Puerto Rico, where Zika is projected to infect an estimated 700,000 people by the end of the year. There also will be posters at the airport for travelers coming from the island.

Even though the main mosquito that spreads the virus is not found in Connecticut, Andreadis urged people to take steps to avoid attracting mosquitoes, including cleaning up outdoor containers that could hold standing water.

The state is also seeking federal funding for mosquito control.

In addition to monitoring, Andreadis said his agency plans to conduct research using live samples of the Zika virus, including by infecting lab specimens of the Asian tiger mosquito with the virus to see if they can transmit it.

Mosquito control funding for the Agricultural Experiment Station in the next fiscal year has varied significantly in the different budget proposals released this year. The governor’s initial plan, issued in February, did not specify a funding level for mosquito control, but would have consolidated it into a larger line item that would undergo a 5.75 percent funding cut, compared to what was originally budgeted for the current two-year spending plan. The Democrat-led Appropriations Committee called for a $57,038 cut, while Republicans in the legislature proposed a budget that did not include any cut to the mosquito control line item.

Malloy issued a revised proposal May 2 that would have provided $504,697 for the agency’s mosquito control, a $2,819 cut from the original appropriation. But the deal reached this week called for a far larger reduction – $60,737.