CT budget details trickle out as partisan debate heats up 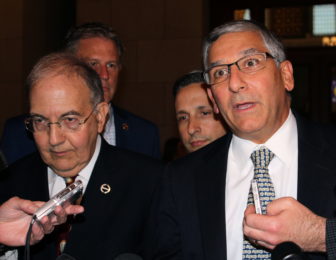 And Democratic leadership in the Senate, where a budget debate tentatively is expected to begin on Thursday, rebuffed a Republican call to delay any debate until all budget-related documents are available for public review.

“Democrats in the Senate have already accommodated the Republicans’ vacation schedules, and we’ve accommodated the Republicans’ request to not hold session on the day of their state party convention – at some point they are going to have to face the music and vote on a budget,” Adam Joseph, spokesman for the Senate’s Democratic majority, said Tuesday. “The Senate is not going to further delay a vote on a balanced budget that makes hundreds of millions of dollars in structural changes. We’ll see them Thursday.”

Democrats insist the deal would close a $960 million hole in 2016-17 finances without tax hikes or fee increases.

“It is hard to believe the Democrats would release a statement saying they are waiting for Republicans to hold a vote based on the limited budget details released today,” Senate Minority Leader Len Fasano, R-North Haven, said. “In fact there are still major unknowns about this budget and we have yet to receive many of the details on the revenue side which is still incomplete. If the Democrats were in such a rush to get this budget vote over with, then why are we still waiting for the details? Why is the budget still incomplete? Why is transparency being delayed?”

“The special session scheduled for Thursday should not move forward until the public has been given the opportunity to read, analyze and raise questions about not only the budget but the implementer as well,” Fasano said, referring to the main budget bill and an omnibus measure spelling out policy changes needed to implement the new budget.

“The public deserves to know how this budget will be implemented and how it will affect their communities and families,” Kane added. 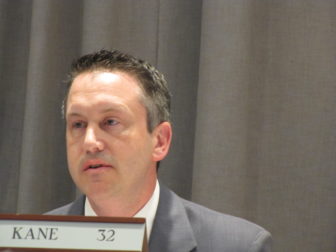 Democrats had distributed an informal, line-item-by-line-item breakdown of the deal late last week.

But without the fiscal and policy analyses that nonpartisan staff prepare to accompany the bill, legislators and the public are missing crucial tools to understand a host of budget issues, including how the dollars in each line item are expended.

The line-item info shared informally last week effectively was released again Tuesday morning when the budget bill went online. But as of 4 p.m., the fiscal note and policy analysis from nonpartisan staff were not posted.

The Offices of Fiscal Analysis and Legislative Research cannot release those documents until instructed to do so by legislative leadership.

Joseph said late Tuesday afternoon that the Democrat-controlled Senate had given its OK. “We’ve asked OFA and OLR to release the documents,” he said.

Gabe Rosenberg, a spokesman for the Democratic majority in the House of Representatives, said shortly thereafter that nonpartisan staff had been authorized to release the documents.

It was unclear late Tuesday whether drafting of the budget policy “implementer” bill had been completed yet.

“Listen, the Republicans put themselves in a tough spot by rejecting the budget out of hand,” Joseph added. “Now that the Connecticut Business and Industry Association (CBIA) has endorsed the Democrats’ no-tax-increase budget, I understand that they might need some time to try to reevaluate their position.”

CBIA President and CEO Joseph F. Brennan urged legislators Monday to adopt the deal, arguing it not only would avoid tax hikes, but would mitigate much larger deficits, approaching $2.25 billion and $2.5 billion, in 2017-18 and 2018-19 respectively.

“By passing the no-tax-hike budget, lawmakers will begin the process of getting Connecticut’s fiscal house in order and addressing the greater challenges ahead,” Brennan said.

“It took six days for the Democrats, after they said they had a deal, to release a skeletal framework of a budget without supporting data in advance of the special session that we  presume will take place later this week, emphasis on ‘presume,'” said House Minority Leader Themis Klarides, R-Derby. “It appears to mirror the plan that we saw last week that includes no structural changes in the budget that will inevitably lead to future budget deficits and deep cuts to towns and cities and our social services network.”

And Fasano chastised the CBIA for endorsing a deal without a nonpartisan analysis of its potential to curb spending over the long haul.

“They caved to the pressure of the majority party and are not acting in the best interests of those they are supposed to represent,” Fasano said. “CBIA’s bar has been lowered so much that any budget without direct tax increases is all they need to claim victory.”