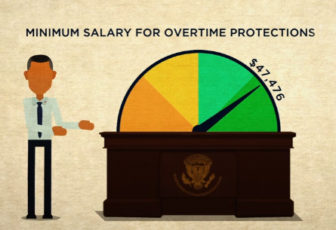 An image from the U.S. Department of Labor video explaining the new rule changes. Watch the entire video at the bottom of this page.

Public and private employers throughout Connecticut who pay their salaried employees less than $47,476 a year will soon have a choice: start paying them for overtime work or boost their pay to at least that threshold.

This new requirement, announced Wednesday by the U.S. Department of Labor, is expected to affect 46,000 private and public employees throughout Connecticut and 4.2 million workers nationwide.

At the University of Connecticut and its health center, as many as 2,302 full-time employees may fall under the new rule. While the change exempts teaching staff, researchers making under $47,476 will be eligible for overtime starting Dec. 1. Most of those affected by the change at UConn include post-doctorate researchers and graduate assistants, employees who regularly work long hours and typically make between $30,000 and $45,000 a year.

“We would have to decide whether to allow them to work over 40 hours and pay them overtime or limit how many hours they work. We are most worried about this impacting research,” said Scott Jordan, UConn’s budget chief. “The impact will be that our costs will go up… It is one of the many fiscal pressures put on to the university.”

He estimates raising the pay for all these employees to $47,476 would cost UConn $1.5 million a year. These added costs come as UConn already struggles to increase research and fill its labs as other personnel costs skyrocket.

Gov. Dannel P. Malloy released a statement supporting the rule change, though his office was unable Wednesday to say how much this shift, first proposed last July, would cost the state government.

“It is a bedrock principle of our nation that workers and their families deserve a fair wage for their hard work,” the Democratic governor said. “These enhanced overtime protections will strengthen and grow the middle class and boost our economy at the same time.”

“State lawmakers have created enough problems for the small business community in Connecticut. The last thing we need are bureaucrats in Washington interfering with the day-to-day operation of our businesses,” said Andrew Markowski, the state director for the National Federation of Independent Business. “Instead of helping workers, not only will this rule interfere with the job market and cause entry-level management positions to become extinct, but the employees impacted will have to fall back into hourly jobs. Increased labor costs thanks to this mandate will have to be offset somewhere, and at this point our members have nothing left to give.”

Randi Weingarten, president of the American Federation of Teachers, is pleased with the shift.

“Every day, millions of working people are logging longer hours but still struggling to make ends meet. This rule change will help American families, and we applaud the administration for taking this important step,” she said.

Currently, workers earning up to $23,660 annually were eligible for time-and-a-half for every hour they worked beyond 40 hours. This rule doubles that threshold to $47,476. A limited number of Medicaid-funded providers will have until March 2019, to comply with the rule – those who provide services for individuals with intellectual or developmental disabilities in residential homes and facilities with 15 or fewer beds.

Jordan, the UConn budget chief, said he hopes that federal grants will increase to make up for the added cost of the new overtime requirement.

“If the cost goes up, then the grants should go up, too,” he said. “We are waiting to hear.”