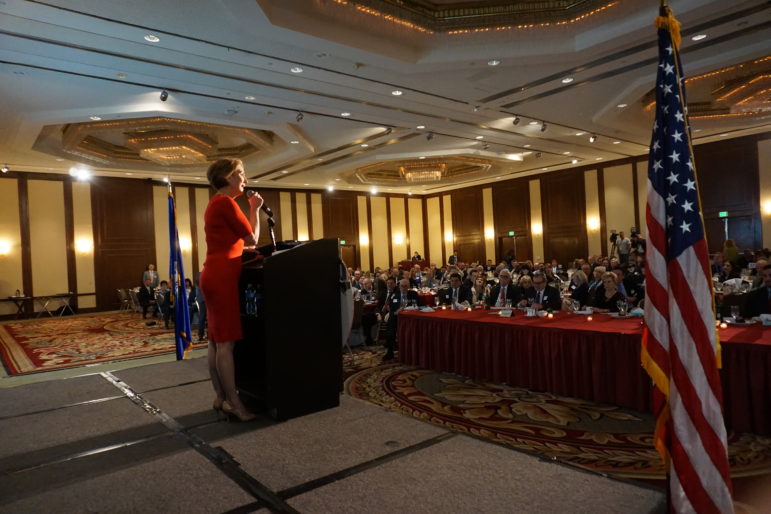 Carly Fiorina couldn’t bring herself to mention Donald J. Trump by name in a 30-minute speech.

Stamford – Carly Fiorina seemed to endorse Donald J. Trump, if only by inference Tuesday night. She never allowed herself to say his name, yet vowed to do everything “to make sure that Hillary Clinton is not our next president.”

Presumably, “everything” includes entering a polling place to cast a vote for Trump, even if he is, at least for the moment, the Nominee Who Cannot Be Named, right?

Fiorina, 61, who lingered to chat with well-wishers after her speech at the Connecticut Republicans’ annual fundraiser, the Prescott S. Bush Awards Dinner, just smiled when a reporter interrupted with that question.

“I’m sorry, I’m meeting with voters right now,” Fiorina said, keeping her gaze directed at the Republicans who wanted to shake her hand and pose for pictures. “Sorry, you heard the speech. That’s all there is.”

Fiorina stopped only when the question was repeated.

“We’re not doing interviews,” she said. “You heard the speech. That’s what you got.”

It was good enough for her audience. Her vow to do anything to deny Clinton the White House was rewarded with hearty cheers and a standing ovation, as was a call for unity. Republicans shrugged off the refusal by Fiorina, who has said she is “horrified” by Trump, to explicitly endorse him.

“She gave an endorsement to Trump without mentioning him by name,” said Senate Minority Leader Len Fasano, R-North Haven. 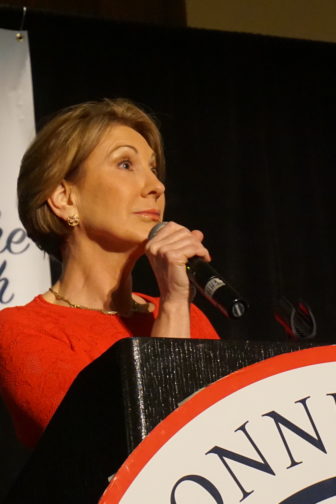 Linda McMahon, the two-time U.S. Senate nominee and major GOP donor who will be a Trump delegate in Cleveland, said Fiorina told her before the speech she intends to campaign for down-ballot Republicans. A willingness to campaign for Trump didn’t come up.

“She and I didn’t really talk politics in that way,” McMahon said.

It’s been a tough month for the 61-year-old Fiorina, the former Hewlett-Packard chief executive who lost a U.S. Senate race in California to Barbara Boxer. On May 2, she fell off a stage while introducing Ted Cruz in Indiana. A day later, she fell off political radar screens, her brief time as Cruz’s running mate ended by Trump’s smashing win in Indiana.

Before Cruz dropped out, the Connecticut GOP faced the unnerving prospect of a keynote speech by a woman intent on telling them they erred by voting for Trump by a landslide in the April 26 primary.

Fiorina offered wan praise for Trump at the outset of her 30-minute speech.

“Our nominee has raised Twitter to an art form. Let’s face it,” she said.

Fiorina said she never mastered how to pack a punch into its 140-character form, but she read that potential Hilliary slogans were trending. She offered a few.

“ ‘It’s my turn, dammit.’ ‘Four out of 10 people find me tolerable.’ And my personal favorite: ‘Experience you cannot trust,’ ” she said.

Fiorina quickly dropped the jokes and delivered a scathing appraisal of the candidate who would be the first female president, a fact that does not seem to be exciting the Democratic base, male or female.

“So, now they are beginning to continuously remind people abot the historic nature of her candidacy, that she is a woman and therefore women must vote for her,” Fiorina said. “So, Mrs. Clinton, I have news for you. I am a woman, and I am not voting for you.”

The crowd whooped and applauded.

Fiorina said Clinton’s gender was no basis for other women to support her for president.

“Feminism is what each and every woman has an opportunity for to live the life she chooses and to use all of her God-given gifts,” she said. “That is feminism, and as a feminist I will do everything in my power between now and November to make sure that Hillary Clinton is not our next president.”

For now, it was enough that they knew what she meant.