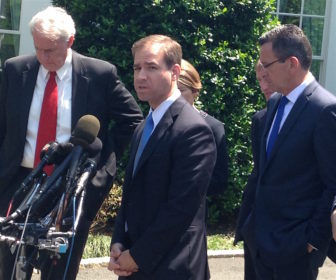 Washington – Gov. Dannel P. Malloy said Tuesday “you’d have to be a fool,” to believe what presidential hopeful Donald Trump says on gun control or any other subject.

This week Trump clarified his position on allowing guns in schools. He had said he supported the elimination of gun free-zones in schools, prompting Democratic rival Hillary Clinton to say Trump wanted to “mandate that every school in America allow guns in the classroom.”

On Monday, Trump said he would only eliminate guns in school zones “in some cases,” and trained teachers and school resource officers should be the ones carrying guns.

At an all-day summit at the White House on gun safety, Malloy took a break to speak to reporters and was asked about Trump’s apparent change in position.

“You have to be a fool to believe anything Donald Trump says,” said Malloy  in response to a reporter’s question about Trump’s stance on guns.

During the White House summit, Malloy said he spoke of Connecticut’s recently passed legislation aimed at preventing gun violence in domestic abuse cases. The legislation requires gun owners to surrender their guns within 24 hours of being served with a temporary restraining order in such cases.

“Domestic partners are more likely to be killed when there is a gun in the house,” he said.

He said he appreciated President Obama’s use of executive actions to tighten gun laws and bashed Congress’s inaction on gun control.

Dozens of mayors – including Hartford Mayor Luke Bronin – and state legislators attended the summit, as well as a handful of state attorneys general

Bronin said Obama has acted, as has the state of Connecticut, to curb gun violence, “but until we adopt comprehensive, common-sense laws on the national level, we are going to continue to see illegal guns trafficked across state lines.”

“We can’t solve this problem one city at a time,” he said.

Malloy introduced Vice President Joe Biden at the gun conference and told reporters he had become very close to Obama during his many trips to Washington and the White House.

But, he said, there is another reason for his frequent trips to the nation’s capital.

“I come to Washington because there’s a fair amount of money (here), and I want to compete for it,” he said.

Malloy, a staunch Clinton supporter, is a co-chair of the Democratic platform committee,which creates a policy document that will be adopted at July’s Democratic National Convention in Philadelphia.

Clinton’s Democratic rival, Sen. Bernard Sanders, has objected to the appointment of Malloy to the key position, calling him “an aggressive attack surrogate” for Clinton.

But Malloy told reporters he would not step down from his post on the platform committee if Sanders asked him to, “because I was appointed to be co-chair.”

On Monday, the Democratic National Committee made a concession to Sanders, agreeing to allow him to choose five members of the platform drafting committee. Under the deal, Clinton can appoint six to the panel, and the DNC can appoint four others.

Malloy agreed that drafting a platform that both Clinton and Sanders can support will be a tough job, but he said it is doable, despite the possibility for conflict, because the political stakes for his party are so high this year.

“Everybody knows we have to elect Democrats,” he said.