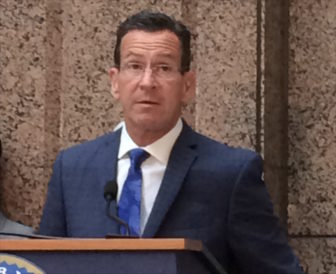 Gov. Malloy answers questions after a meeting of the State Bond Commission Friday.

The State Bond Commission approved $22 million in financing Friday to help one of the nation’s largest hedge funds expand in Fairfield County.

Both Lembo and Rep. Chris Davis, R-Ellington, argued it was imprudent to dedicate scarce state resources to a firm that manages more than $130 billion in global investments.

This $22 million investment — which passed 7-2 — will be matched with $505 million from the company and used to expand facilities in Westport, Wilton and Norwalk. It would help to retain 1,400 high-paying financial services jobs and add 750 more, the governor said.

But Lembo and Davis said it isn’t that simple. 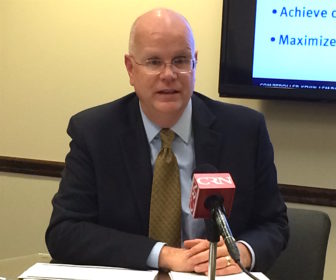 “It is indisputable that Connecticut faces a new economic reality – one that warrants reevaluation of our economic development strategy, especially as the state faces ongoing cuts to services and the layoff of thousands of employees,” Lembo said in a statement issued after Friday’s meeting.

”Despite my general reluctance about the state picking winners and losers, I have been willing to cautiously support economic assistance to private companies – but the size, scope and nature of this particular proposal stands out and meets a new threshold that compels me to vote against it,” Lembo added. “While state funding of private enterprises may sometimes be necessary — in certain cases and after careful evaluation — I believe we have an obligation as a state to focus our economic strategy and resources on investments that benefit all Connecticut businesses.”

“Did they not have the capital funds themselves” to pay for the expansion? Davis asked, adding that Bridgewater is “a company that is quite capable of paying for this themselves.”

At the same time Connecticut is preparing to borrow $22 million to assist the hedge fund, Davis noted, legislators are expected to cancel about $1 billion in financing for school construction, capital projects at public colleges and universities, and dozens of smaller, community-based projects.

Malloy responded that “we are in direct competition with other states bordering us” for the Bridgewater expansion, adding that he believes the company also was considering at least one location in New York’s Westchester County.

The governor, who took heat in January after GE announced it was moving its global headquarters from Fairfield to Boston, used the loss of the company as a shield in this case.

He noted that the state of Massachusetts and city of Boston provided more than $145 million in incentives to attract about 200 jobs away from Connecticut.

That makes the Bridgewater assistance, he added, look modest by comparison.

The governor also implied his critics, on both sides of the aisle, were playing politics.

Republican legislators would be the first to complain publicly if Bridgewater announced it were leaving the state, Malloy said.

And what about Lembo?

Leadership requires a willingness to do things that aren’t necessarily popular,” Malloy said. “Let me assure you, whether he (Lembo) would be publicly critical — privately he certainly would have been critical if Bridgewater, based in Connecticut, had decided to add their jobs in some other state. Don’t you think?”