Long recognized as one of the most indebted of states, Connecticut’s chief offset against that burden was its tremendous wealth.

But even weighed against personal income, what Connecticut owes to its bondholders and retired public-sector workers ranks as fifth-worst among the states, according to a new analysis by The Pew Charitable Trusts.

The report also found Connecticut followed a national trend between 2003 and 2013 as its pension debt worsened faster than any other long-term obligation, reaching its highest point in a decade.

“Although a number of states have taken steps in recent years to shore up their pension savings or cut costs by modifying benefits — mostly for new workers — unfunded pension liabilities have grown more than debt or unfunded retiree health care costs,” Pew researchers wrote.

The pension crisis is driven by a combination of factors, they added, including lower-than-expected investment returns and historic under-funding issues.

And while the report only uses data through 2013, it notes that strong investment earnings for many states in 2014 “may have been undercut by weak investment returns” in 2015 and 2016.

With one of the highest per capita incomes of any state, Connecticut in 2013 owed $25.3 billion to its state employee and teacher pensions, $22.6 billion to its retiree health care program, and $19.6 billion in bonded debt.

There were four states worse off than Connecticut based on this standard:

“This report re-establishes what we know to be true — that leveling and reducing our unfunded liabilities must be a priority,” said Connecticut’s comptroller, Kevin P. Lembo.

“Budget stability and predictability was the central focus” of those plans, Lembo said. “We need to continue to responsibly pay down our long-term obligations, whether it be pension, health care and other debt costs, in order to provide a state financial landscape that is predictable and stable.”

Connecticut did not save sufficiently between 1939 and 2010 to cover pensions promised to public-sector workers, according to a report issued last year by the Center for Retirement Research at Boston College.

And the state still does not set aside all of the funding needed to cover retirement benefits for state employees while they are actually working — meaning future budgets must find the rest of the necessary resources after these employees retire.

The governor originally hoped Connecticut could repair the damage caused by seven decades of poor savings habits by expanding pension contributions over the next two decades. But administration officials now say the state budget cannot sustain the enormous growth the pension contributions face between now and the mid-2030s.

The legislature did not act on any pension restructuring proposals during the regular 2016 session.

“The governor knows how important it is to address our unfunded long-term obligations,” Malloy spokesman Chris McClure said. “He is committed to fully funding pensions, but we must do more to reduce the unfunded liabilities and prevent additional growth by changing practices that have failed us — failures that occurred over a generation.”

McClure added that the administration will revisit this issue with lawmakers.

“We’re working on a comprehensive plan, developed with input from nationally renowned expects, to tackle the issue of the unfunded pension liability,” he said. “It’s a plan that will provide stability for the state’s payments, predictability for businesses, and preserve benefits for those who earned them. We need to take comprehensive action to tackle this challenge, just as we need to take steps to ameliorate the challenges with respect to all long-term obligations and we’re working to do that.”

Stacking up against other states

This followed a national trend. All states’ pension debt represented 6.9 percent of personal income by 2013, more than triple the 2.5 percent rate of 2003.

Connecticut followed a similar trend with its bonded debt — which is used to finance school construction, capital projects at public colleges and universities, and smaller community-based projects.

Connecticut, unlike many other states, does hold some bonded debt on behalf of local governments.

The Pew report only traces debt tied to retiree health care back to 2010.

Still, Connecticut’s unfunded obligations for retiree health care are down as a percentage of personal income, standing at 10.1 percent in 2013 compared with 13 percent in 2010.

But that drop hinges, in part, on a contractual pledge Connecticut made to its state employee unions to begin matching workers’ contributions toward retirement health care.

That match, which will cost the state about $120 million per year, begins in July 2017. According to the legislature’s nonpartisan Office of Fiscal Analysis, state finances — unless adjusted — are on pace to run $1.3 billion, or 7 percent, in deficit that fiscal year.

Nationally, states’ retiree health care debt fell from 5 percent in 2010 to 4.2 percent in 2013, mostly because of renegotiated or canceled benefits, the Pew report states. 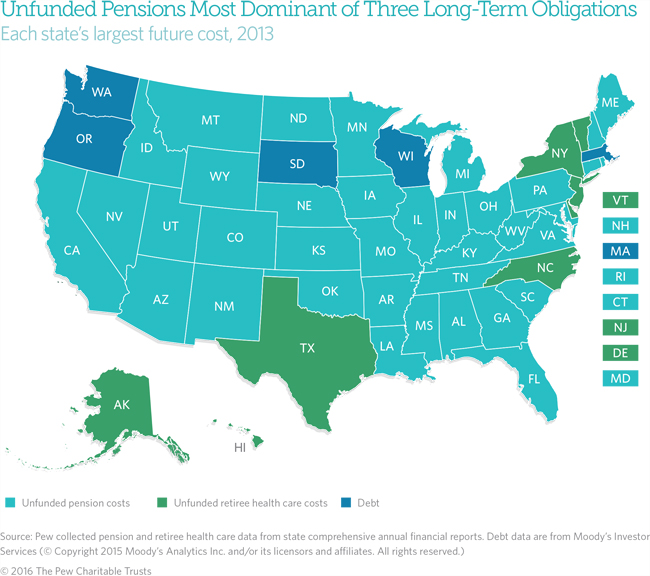