The House of Representatives gave unanimous final approval in special session Thursday to a plan to rebalance Connecticut’s credit card in the face of shrinking tax revenues, canceling or delaying about $1 billion in financing for a wide array of projects and programs.

The bonding measure, which now heads to Gov. Dannel P. Malloy’s desk, also — outside of this rebalancing process — authorizes $382 million in new borrowing for municipal school construction, down significantly from financing for local schools approved in recent years. 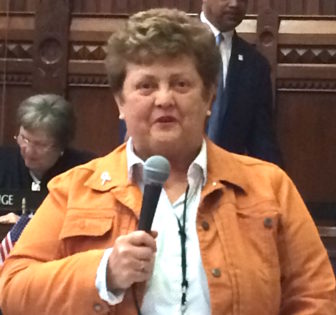 Betty Boukus, D-Plainville, co-chair of the bonding subcommittee of the legislature\’s Finance, Revenue and Bonding Committee.

The Senate adopted the measure 34-2 in special session on May 13.

“We continue to make critical investments in our state,” said Rep. Betty Boukus, D-Plainville, co-chair of the bonding subcommittee within the legislature’s Finance, Revenue and Bonding Committee.

Boukus praised legislators from both parties for responding to a difficult process that was unavoidable given the state’s shrinking revenues.

Lawmakers were required to revisit previously approved financing for projects because of a statutory cap the state sets on the general obligation bonds it sells on Wall Street.

The measure affects capital projects, such as school construction, throughout the state

General obligation bonds are repaid with resources from the state budget’s General Fund. This fund includes income, sales and corporation tax receipts, funds generated by several other minor taxes, gaming proceeds, several categories of federal grants, and revenues from various fees. The bulk of transportation improvements are financed with a different type of bonding and paid off with fuel tax receipts.

Under this capping system, the amount of financing the legislature can authorize is limited by Connecticut’s revenues. And when those revenues shrink, so does the borrowing limit.

For example, the state income tax, which funds roughly half of the annual budget, is projected to raise about $9.3 billion this fiscal year — about $500 million less than the legislature and Malloy’s administration originally anticipated.

That means Connecticut has to cancel $642 million in previously approved bonding.

And because the governor and legislature added about $359 million in financing for new initiatives, that means the total that must be canceled to bring Connecticut under its bonding cap is $1 billion.

House Republicans tried unsuccessfully to amend the bill. Their proposal would have required any business assistance the Executive Branch wants to issue through the First Five program — which primarily uses bonded funds — to be considered by the finance committee.

This would include the $22 million in assistance approved last week for Bridgewater Associates, one of the nation’s largest hedge funds, to help it expand operations in Fairfield County.

The Democrat-controlled House rejected the amendment 84-53 in a vote largely along party lines.

The school construction financing includes $365 million for new projects and about $16 million in additional funds for previously approved work.

The $365 million earmarked for new construction represents just over half of the $518.8 million recommended for local school construction by the legislature’s School Construction Project Priority List Review Committee and by the Department of Administrative Services.