CT dangles in-state tuition to entice students across the border

Connecticut public college officials hope to lure college-bound students from Massachusetts this fall by offering them in-state tuition rates if they enroll in Asnuntuck Community College in Enfield. 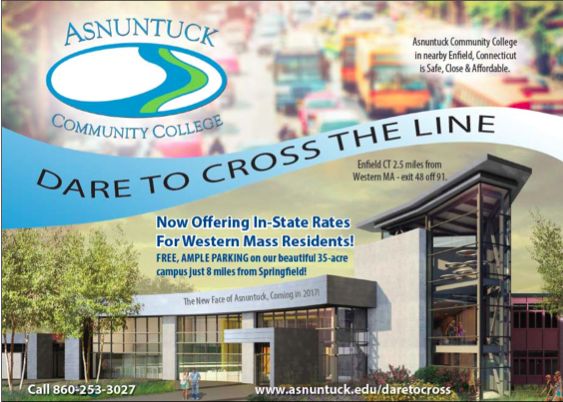 The postcard 80,000 potential students in Massachusettes will begin receiving next week.

Mark Ojakian – the president of Connecticut’s public college system that includes 12 community colleges and four regional universities – said he also is looking at offering in-state rates to out-of-state students at other schools that are close to the border.

“This is an example of thinking differently about how we do things,” Ojakian told the Board of Regents’ Finance Committee on Thursday. “There is all this competition going on in the region for a diminishing number of students, and for us not to be a part of it would be a disservice to our students.”

Most of the state’s community colleges have experienced dramatic declines in enrollment in recent years. Next year the schools are bracing for another 3 percent decline, or 825 fewer students systemwide. Connecticut’s high school population – the traditional college-bound student – is projected by the U.S. Department of Education to decline by 11.6 percent, or 17,400 students over the next 10 years.

While this experiment to charge in-state rates was unanimously endorsed by the finance panel Thursday, some concerns were raised, partivularly whether there would be pushback from state taxpayers, who are effectively subsidizing public colleges in Connecticut and in return receive lower tuition rates.

“Aren’t we subsidizing education for out-of state-students by charging them less?” asked Matt Fluery, a regent from Hartford. 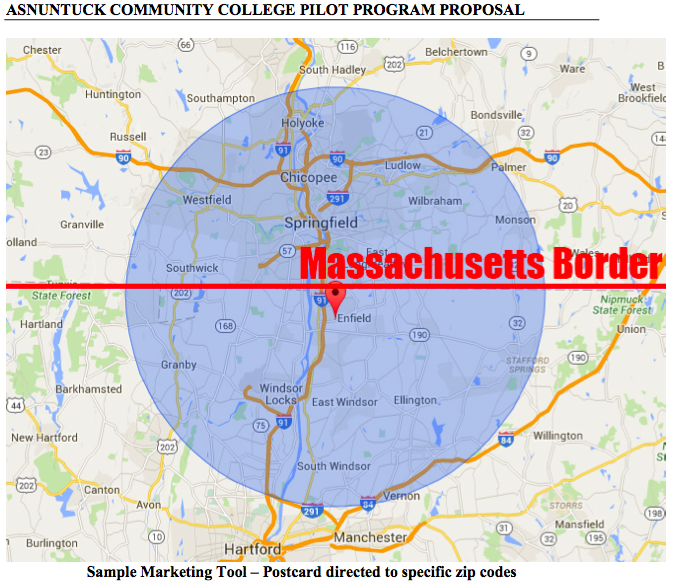 Asnuntuck is 3 miles from the state border.

But college officials pointed out that the alternative is running classes half-full.

“That class is going to run regardless,” said Asnuntuck Community College President James Lombella, whose college is located just three miles from the Massachusetts border. “This additional revenue will fuel our student services.”

The Massachusetts Department of Higher Education said the state does not offer in-state rates for tuition to Connecticut students, though individual colleges are free to set other fees they charge.

In the wake of enrollment dips – and the constant recruitment of Connecticut residents out-of-state schools with radio, television and billboard advertisements – Connecticut college officials are trying to go on the offensive to refill classrooms.

The Connecticut State Colleges & Universities system, which the regents oversee, announced last month that it had landed private scholarship funding so hundreds of undocumented immigrants from Connecticut and other states can enroll at Eastern Connecticut State University in Willimantic. Officials have also been lobbying the state legislature to amend state laws so they can open the system’s financial aid pool to undocumented residents that graduate from high schools in Connecticut.

When Southern Connecticut State University rejects students for admission, it now informs then they have been accepted to Gateway Community College in New Haven.

The college system also last winter made several policy changes so community college students in danger of dropping out are identified, provided counseling and monitored.

The school also changed financial aid policies so students don’t lose their aid if they fail too many courses in their first semester. Previously, students had to pass a certain percentage of their classes to maintain their aid throughout their college tenure. While that is still the policy, the bar is now set lower for students when they enter college, and the percentage increases over time.

“It’s pathbreaking,” said Barbara Richards, a professor of sociology at the state’s community college in Bridgeport and a faculty member of the CSCU system’s governing board. “These changes are really helping to retain students.”

“We have not forgotten the Connecitcut students who go to our schools and how we can better help them afford college,” said Mark Ojakian.