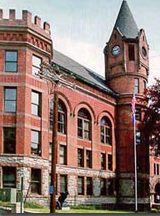 After hiring state police Friday to temporarily enhance security outside of a Superior Court in Bridgeport, the Judicial Branch will assign troopers to guard courthouses in four cities starting Monday, a branch spokeswoman said.

These changes come as the court system grapples with a $77 million funding cut to its finances starting July 1. And while that cut led the court system to eliminate 300 jobs, including layoffs for 101 judicial marshals, branch spokeswoman Melissa Farley said the state police presence was not related to those cutbacks.

But a spokesman for the union representing judicial marshals said the two matters may be linked, adding that all courthouses — not just those in major cities — will be at greater risk once the layoffs of marshals take effect on June 23.

The security was ordered Friday in response to gang activity that occurred Thursday outside of the Superior Court building on Golden Hill Street in Bridgeport, according to a written statement from the Judicial Branch.

And although the branch statement did not provide specifics of the activity, the Connecticut Post reported that members of two rival gangs battled with baseball bats and wrenches outside of the courthouse on Golden Hill Street.

“We have engaged the state police to provide security on the Golden Hill premises and will continue to coordinate our efforts with state and local law enforcement authorities to ensure that the courthouses remain safe and secure for the public, judges and staff,” the branch’s statement read.

Farley said troopers, who — unlike marshals — are permitted to carry guns, have been hired in the past to enhance security, particularly if gang activity has occurred.

Troopers will return to Bridgeport next week, she added, and also will be retained to guard the perimeter of courthouses in Hartford, New Haven and Waterbury. They will earn between $60 and $75 per hour, she said.

“We thought it was prudent to have state troopers there next week,” Farley said. Branch officials will reassess the situation on a weekly basis and determine whether enhanced security will continue at some or all locations.

But Joe Gaetano, who heads union representing marshals, said, “I believe they may be doing this because we are going to be substantially low on marshals.”

Gaetano, who is president of the International Brotherhood of Police Officers Local 731, also said police were used in the past to enhance the security provided by marshals — not to supplant it.

“There are threats at every courthouse,” he added. “This does not address the concerns that are going on daily.”