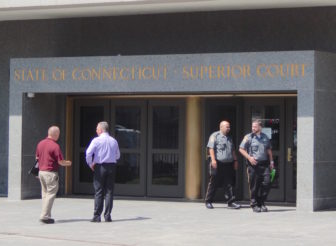 As Connecticut’s Judicial Branch moves ahead this week and next with a major reorganization driven by deep budget cuts, its leaders warn even they aren’t entirely certain what the full impact will be.

And while they agree with the court marshals union that security is being stretched to a highly questionable degree, they assert that the court system had no alternative after being saddled with tackling a disproportionate share of state government’s budget woes.

“It’s hard not to see it that way,” Thomas Siconolifi executive director of administrative services, told The Mirror last week. “We’re 3 percent of the General Fund and we took a 13 percent cut.”

Siconolfi is referring to the $528.3 million budget the legislature and Gov. Dannel P. Malloy approved for the Judicial Branch for the fiscal year that begins July 1.

But the branch also must forfeit $22.4 million of that to help hit savings targets lawmakers built into the budget. And another $6 million must cover probate court system costs not assigned previously to the Judicial Branch.

All totaled, resources are $77 million below the level built into the preliminary 2016-17 budget legislators and Malloy had enacted last year.

In fact, the roughly $500 million available to the Judicial Branch next year is about 4.5 percent less than the court system received two years ago.

Legislators and administration officials have said things are tough all over. Programs were cut across most of state government as they closed a nearly $1 billion deficit in 2016-17 finances without raising taxes. More than 720 layoffs have been ordered in the Executive Branch to date. And while the Judicial Branch took a deep cut, it also received plenty of resources during better times.

The new budget is still up 6.6 percent from the funding the branch received in 2010-11, the last budget before Malloy’s administration began.

But Siconolfi said most of the growth in recent years has not been available for regular court operation costs. Rather it has been to fulfill mandated new programs such as intensive probation and other anti-recidivism efforts. 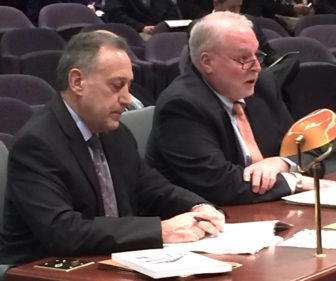 Judge Patrick L. Carroll III, right, chief court administrator, testifies before the legislature in February on the impact of budget cuts on the judiciary. At left is Tom Siconolfi, executive director of administrative services for the Judicial Branch.

Faced with a 13 percent cut, hits to both regular court operations and other programs were unavoidable, he said.

Judge Patrick Carroll IIII, the chief court administrator, warned legislators last February that the budget cuts under consideration could “compromise access to justice” and leave the branch unable to meet its constitutional obligations.

Siconolfi said the branch’s plan to manage a $77 million reduction appears to avert that prospect — but he was careful not to dismiss Carroll’s warning altogether.

“I don’t know when that point is reached, but it could be reached down the road,” Siconolfi said.

Legislators cut $35 million from the branch’s salary account. This translated directly into 239 layoffs, including 101 judicial marshals.

A nearly $7 million cut to an account for contractual services led to 61 temporary court clerk and court recording monitor posts being eliminated.

Joseph D. D’Alesio, executive director of Superior Court operations, said the branch tried to mitigate the impact of this cut as best it could. Forty-eight of the 101 marshal posts eliminated involved a training class not yet engaged in security functions.

Still, a contingent of 720 marshals now is down to 667 with layoffs that take affect today. That’s well below the 840-marshal level branch officials had hoped to work toward, and even further below the 1,000 the Office of Policy and Management recommended 16 years ago when Connecticut ended the county sheriff system that had provided courthouse security.

But other factors could make things worse.

The Judicial Branch also is counting on eliminating 200 to 300 positions across all branch jobs in 2016-17 through retirements, resignations and other attrition factors. D’Alesio said about 60 marshals retire annually, on average, and its unclear whether those will be replaced.

The branch has not been immune from mid-year budget cuts ordered by legislators in recent years as deficits have developed. And there already are signs that income tax receipts could fall short of projections.

In addition, D’Alesio said about 100 marshals on any given day are unavailable because of sickness and on-the-job injuries, vacations, and other scheduling issues.

The branch already has announced plans to close the Superior Court in Windham, juvenile court operations in three other communities and 24-hour court lockup facilities in Hartford and New Haven.

A branch steering committee, working with representatives of the attorney general, chief state’s attorney and public defenders, is reviewing other possible court and office closures, though no final decisions have been reached.

The court and lockup closures ordered so far, D’Alesio said, allow the branch to reassign about 50 marshals who might otherwise have been assigned to these areas.

These closures weren’t ordered to save money, D’Alesio said. “That’s not the issue,” he added. “We just didn’t have enough people to staff them” after the layoffs driven by salary account cuts. 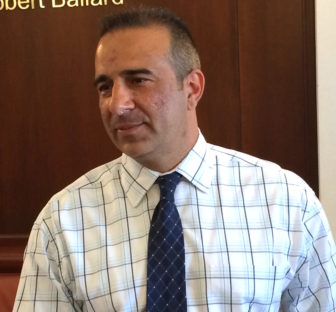 But the unions representing marshals and other security personnel disagreed.

“I understand they are behind the 8-ball, but there are better ways to balance the budget,” said Joe Gaetano, who is president of the marshals’ union, Local 731 of the International Brotherhood of Police Officers.

Gaetano urged branch leaders to review contracts for information technology and security assessment services. These savings wouldn’t eliminate all layoffs, he said, but could mitigate them somewhat.

Gaetano and Charles Della Rocco, who heads Local 749 of the American Federation of State, County and Municipal Employees, both said the branch is top-heavy with administration, and should look to cut costs there.

“We respect what they are trying to do” to balance the budget, he said. “But we think there are better ways of doing it.”

Branch spokeswoman Melissa Farley said branch officials disagree with the characterization that spending on administration and private contracts is too high.

But she and Siconolfi said union leaders aren’t the only ones who will be watching court security issues very closely in the new fiscal year.

“Ensuring the safety of all who enter our courthouses is always our top priority, and it will clearly become more challenging with the unavoidable loss of judicial marshal staff — as well as other staff — due to the significant budget cuts,” Farley said.

“I think the marshals’ statement is spot-on about court security,” Siconolfi said.

Court officials hired state police troopers to provide security outside of courthouses in four cities this week after a gang-related violent incident occurred last week outside a court in Bridgeport. Branch officials nonetheless say this wasn’t done in response to the impending layoffs of marshals, but Gaetano is skeptical. 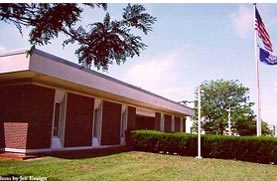 The Windham Judicial District courthouse Willimantic that has been slated for closure.

The marshals’ union contends security staffing levels “were short to begin with,” Gaetano said, adding that the union won’t hesitate to file a prohibitive practice complaint — alleging unsafe working conditions — with the Department of Labor, if necessary.

“They are ignoring us right now,” Gaetano said.

“It is an election year,”Della Rocco added.

Though the budget cuts went deep into court operations, Siconolfi and D’Alesio said it also wasn’t possible to avoid reductions to alternatives to incarceration, both for juveniles and for adults, and to other anti-recidivism programs.

At first glance, the cut to programs is about $12.9 million. But to hit mandated savings targets, the branch also will take another $14.4 million out of programs for youth and adults.

Branch officials estimate the cuts to these programs — many of which are provided through contracts with community-based nonprofits — will result in the loss of about 200 private sector jobs.

“This wasn’t a case of us assigning cuts only to things that matter to people,”Siconolfi said, adding that with a 13 percent reduction, “you really have no choice but to go into programs. … None of this is anything we would choose to do.”