As DEEP cuts budget and park hours, it gets a surprising new role

To help cope with a $10 million budget cut, the state Department of Energy and Environmental Protection announced Friday it will close three campgrounds, leave popular beaches unguarded some days and slash operations at other attractions, such as Gillette Castle.

Left out of the announcement was a significant wrinkle: As the department struggles to manage its network of state parks, forests and other assets with less money, it is being handed a significant new responsibility – managing the Old State House in Hartford.

One of the legislature’s budget implementer bills directs the Office of Legislative Management, which took over management of the Old State House in 2008, to hand control of the building to DEEP as soon as the legislature and agency can negotiate a lease.

It was not a change sought by staffs of legislative management or DEEP.

“This is not anything we sought or wanted,” said Dennis Schain, a spokesman for DEEP. “We were frankly caught by surprise. Nobody has really explained to us why.”

“I have no idea how this happened. We did not seek it,” said James P. Tracy, the executive director of legislative management, the non-partisan agency that runs the current seat of government, the State Capitol and Legislative Office Building. “I can tell you we’re in discussions regarding the transfer.”

Needless to say, with the new landlord already in a money crunch, the expectations are the Old State House will see cutbacks in its operations. The legislature now contracts with the Connecticut Public Affairs Network to conduct tours and other programs at the building.

It is not the first time the Old State House has been a treated like a poor relation, despite its value as an artifact of architecture and history. It was completed in 1796, designed by the famed architect Charles Bullfinch. The Amistad slave trial began there.

But the seat of government shifted to the current State Capitol on a hilltop overlooking Bushnell Park in 1879, marking an end to an era when the legislature alternated between meeting in Hartford at the Old State House and in New Haven. 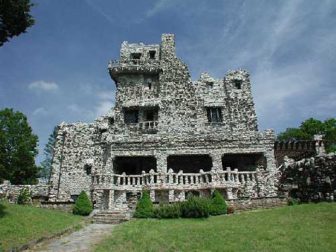 The Old State House faced demolition before it was declared a National Historic Landmark in 1960. Preservationists rallied to restore the building, but its owner, financially strapped Hartford, shed responsibility for the landmark in 2008, when the Office of Legislative Management signed a 99-year lease with the city.

Last November, the Malloy administration proposed cutting funding for the building as it struggled to stem the flow of red ink. The legislature appeared to revive the idea, including it in the final budget deal for the fiscal year that begins July 1.

In effect, the legislature is shifting responsibility to the executive branch, shedding a $550,000 budget line item.

“We basically need to sublease the building to them, and it’s complicated,” Tracy said. “There are a lot of things in the building loaned by various organizations. There are complications. We need to work all this out.”

One matter is simple – money. There will be less of it to operate and maintain the Old State House. Where the legislature ran the facility with $550,000, DEEP is being told to make do with $400,000.

But even the $400,000 is not really additional money, since DEEP’s overall general fund appropriation of $73 million is being cut by $10 million, Schain said. To help absorb the cut, the parks division is taking a hit of $1.8 million in its $18 million budget.

That is the savings to be realized by a wide range of cutbacks announced Friday afternoon.

DEEP is closing campgrounds at Devils Hopyard in East Haddam, Salt Rock in Baltic, and Greens Falls in Voluntown after July 4.

Lifeguards only will protect the Long Island Sound beacher at Hammonasset, Rocky Neck, Sherwood Island and Silver Sands from Wednesday through Sunday. The beaches will remain open without guards on Mondays and Tuesdays.

Inland parks will have lifeguards between three and five days a week.

Days and hours at museums and nature centers also will change after July 4.

The hours of the Old State House are uncertain, as DEEP tries to keep it open while it also maintains 109 state parks and 32 state forests.

“We do recognize what an amazing building it is, the historical significance and the potential to be an exciting center for education and tourism,” Schain said.