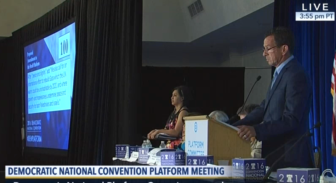 At times the room was raucous, especially when Sen. Bernie Sanders lost on a key issue concerning a trade pact with Pacific Rim nations, but Gov. Dannel Malloy was able to keep Democrats moving forward Saturday on the party’s platform.

One of two co-chairs of the Democratic platform committee meeting in Orlando – the other is former Atlanta Mayor Shirley Jackson – Malloy presided over debates and votes on dozens of amendments that would modify a draft platform, a nonbinding document that serves as a guidepost for the party.

The draft was hammered out by a 15-person drafting committee last month and the final document will be voted on by the 4,765 delegates to the Democratic National Convention in Philadelphia at the end of the month.

Shortly after the start of the platform committee meeting Friday, sensing discord, Malloy said, “There will be disagreements, but we don’t have to be disagreeable in the process.”

A big flashpoint on Saturday occurred early in the committee’s session with consideration of an amendment by Sanders supporter Jim Hightower, a progressive Texas political activist, that would have barred Congress from considering a vote on the Trams-Pacific Partnership trade agreement.

“The TPP is 2,000 pages of unadulterated manure,” Hightower said.

Malloy tried to keep him to his five-minute limit.

“You’ve got a lot of people behind you, you have got two minutes,” the governor said.

The TPP amendment was Sanders’ key issue in Orlando. But the White House had lobbied members of the platform committee to reject Hightower’s amendment, and it failed on a 116-64 vote to jeers and booing.

Instead the committee adopted an alternative amendment in opposition to “trade agreements that do not support good American jobs, raise wages, and improve our national security.”

Rep. Rosa DeLauro, D-3rd District, an arch-foe of the TPP who says it would cost U.S. jobs and weaken U.S. environmental and health regulations, reacted swiftly to the platform committee’s action.

“The Democratic Party’s nominee, Hilary Clinton, has made her opposition to the agreement clear, that this bad agreement should not be considered by Congress, before or after the election,” she said.

Sanders controlled about 70 votes of the 187-member committee, with Clinton having the backing of about 100 and the remainder being appointees of the Democratic National Committee.

One Sanders supporter was Victoria Cassano, an occupational physician from Hartford and one of two Connecticut members of the platform committee, besides Malloy.

Cassano said she was disappointed in the defeat on the trade issue, but understood why fellow Democrats voted to kill it.

“Nobody wants to oppose something that (Obama) has put together,” she said.

When a protest in support of a Sanders-backed amendment in support of Palestinians living in Gaza broke out, Malloy calmly called for it to be read a second time, above the din.

The amendment failed on a 95-72  vote, sparking more protest and walkouts by Sanders supporters.

Although there have been moments of “high drama” as the nation’s Democrats craft the policy document that aims to unite the party, Cassano said, “There are people on both sides who are pretty reasonable.”

One attempt at compromise occurred over health care.

On Saturday, Clinton announced her support for a “public option” in health insurance and proposed additional funding for community-based centers championed by Sanders.

In a statement Clinton said she would “affirm” her support to allow state health insurance exchanges to offer government-run health plans as part of the Affordable Care Act.

Clinton also said she would support allowing people 55 and older to buy into Medicare, a program now limited to those 65 and older.

“People are working together, people are having a chance to debate issues they care about,” he said.

Sanders won a key victory when the committee voted to toughen the platform’s call for a $15-an-hour minimum wage, but two Sanders-backed amendments on Social Security policy were rejected. One would have eliminated the cap on Social Security taxes on those earning $250,000 or more a year and another would have created a new cost of living index for Social Security benefits.

Cassano said she was surprised they were rejected. An occupational physician, she hoped the panel would adopt her amendment, expected to be considered late Saturday, that would boost federal funding for public health education.

Although Sanders objected to Malloy’s role as co-chair of the committee, saying the governor is too tied to Clinton to be impartial, Cassano said Malloy handled the job well.

“He’s fair, he’s balanced and he made wonderfully appropriate remarks at a memorial service for the victims at the Pulse nightclub,” she said.

The memorial was held at the Orlando art museum on Friday.