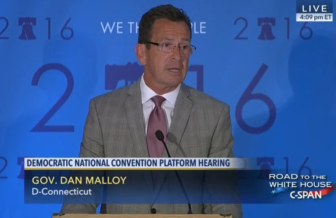 Gov. Dannel Malloy presided Friday over the Democratic Platform Committee meeting in Orlando, Fla., an event held under the pall of the shooting deaths of five police officers the night before in Dallas and the shooting this week by police officers of black men in Minnesota and Louisiana.

“The events in Dallas twisted a proud American tradition of protest and turned it into a tragedy,” Malloy said in his opening remarks to 187 platform committee members who will approve the final draft of the platform this weekend.

The platform, a document that will be presented to delegates at the Democratic National Convention in Philadelphia at the end of the month, is a nonbinding document that serves as a guidepost for the party. It usually takes a backseat to the drama of officially nominating candidates for president and vice president at the convention.

But this year, Sen. Bernie Sanders, I-Vt., who challenged former Secretary of State Hillary Clinton for the Democratic presidential nomination, has made the platform the final stance of his campaign. He and his supporters on the platform committee are pressing for changes to a draft hammered out by a 15-person drafting committee last month.

Sanders’ allies will look to push a long list of policy changes, including a carbon tax, a ban on fracking and language promising to expand Medicare.

But in an interview earlier this week, Sander said his number one goal is to have language included in the platform that bars a vote in Congress on a proposed Trans Pacific Partnership, a trade agreement he says would hurt American workers.

Presumptive Democratic nominee Clinton also opposes the TPP, but has been more nuanced in her opposition than Sanders, suggesting she might support a version of the deal with more worker protections.

As co-chair of the committee with former Atlanta Mayor Shirley Franklin, Malloy is in the middle of the inter-party fight over the platform.

Sanders had insisted to the Democratic National Committee that Malloy should be removed from his post because of the governor’s strong support of Clinton, which included campaigning for her and against Sanders in New Hampshire in January.

But Sanders shrugged off Malloy’s role in crafting a final platform.

“It’s not a question of Dannel Malloy, we have to win over a majority of the delegates,” he said.

After calling for a moment of silence to honor the dead in this week’s shootings, Malloy downplayed the differences among Democrats.

“This is a platform that not only seeks common ground, it seeks higher ground,” he said.

He called it a “bold, progressive vision,” that would help Clinton – and other Democrats – win in November’s elections.

It is perhaps the most liberal policy statement national Democrats have ever drafted. It would raise the federal minimum wage to $15 an hour, establish a multimillionaire surtax “to ensure millionaires and billionaires pay their fair share,” and abolish the death penalty, which the platform says has “has proven to be a cruel and unusual form of punishment.”

The committee broke from its work on the platform Friday – it plans to finish its work on Saturday—so members could attend a memorial at the city’s art museum for the 49 people shot last month at Orlando’s Pulse nightclub.

Related links
Connecticut must pause, grieve, and strive to be better
In a commentary, Gov. Dannel P. Malloy asks Connecticut citizens to reflect on violence in our society and how to become a stronger, more peaceful state and country.

As it considered 38 amendments to the platform late Friday, negotiations were ongoing between the Clinton and Sanders camps over their policy differences.

Connecticut has two members on the platform committee, Victoria Cassano, an occupational physician from Hartford who supports Sanders and Tom Wilkinson of Fairfield,  head of the United Food and Commercial Workers Local 371, who supports Clinton.

Neither Cassano nor Wilkinson are delegates to the DNC convention, but were picked to serve on the platform committee as Democratic standing committee members.

Wilkinson said he hopes to stay out of the fight over policy issues and supports the draft platform as it is.

“It has some strong language on organized labor, and I’m happy about that,” he said.

While Sanders seemed to back off on his objection to Malloy’s role on the committee, the liberal group Democracy for America delivered a petition Friday signed by 21,543 Democrats to members of the platform committee calling for the governor to “reject  the dangerous merger of Anthem and Cigna or immediately resign from his position chairing the 2016 Democratic Platform Committee.”

“Democratic leadership in Connecticut and around the country can no longer have it both ways,” said DFA Chairman Jim Dean. “Our party deserves to know if our leaders, like Gov. Malloy, are going to stand [with] the Wall Street interests who want to choke off competition in the health insurance industry or the working families who will be harmed by their pursuit of profit at any cost.”

University of Connecticut political science professor Ronald Schurin said there was no way Malloy could know he would be in the hot seat when he accepted the job of leading the platform committee,

“He’s put himself in a position where he’s political persona non grata to the Sanders people,” Schurin said. “If Hillary is elected and wants to give an important position to a friend like Dan Malloy, she runs the risk of antagonizing her liberal base, which will be important to her in years going forward.”

Schurin said the Malloy–Sanders rift was sparked by the governor’s “implication that Sanders has blood on his hands because of his lukewarm support for gun safety regulation.”

He said it’s ironic that Sanders progressives are unhappy with Malloy because the governor belongs to the liberal wing of his party.

“On other issues Malloy’s position lines up with Sanders’” Schurin said.