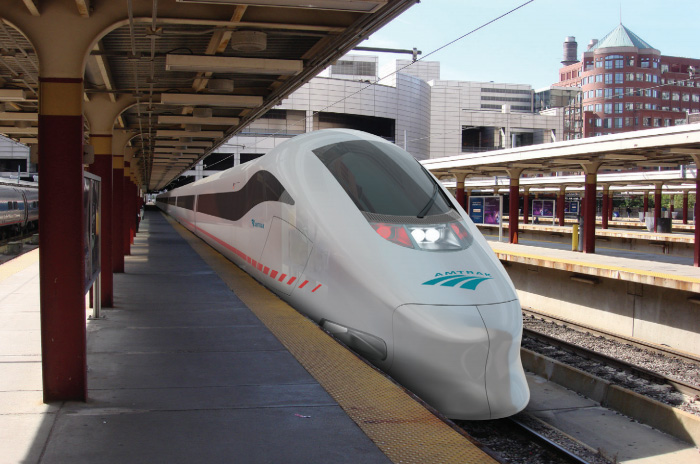 Washington – Amtrak is backing an ambitious plan proposed by the Federal Railroad Administration to overhaul rail transportation in the Northeast corridor, a proposal that would cost more than $300 billion and calls for new lines to be built from New Haven to Hartford through Meriden and from Hartford to Providence.

“(It is) the closest version of Amtrak’s vision for the Northeast,” Amtrak President and CEO Joseph Boardman wrote the FRA.

Boardman’s letter was one of hundreds of public comments released to the Connecticut Mirror Thursday in response to a Freedom of Information request for all comments on the agency’s NEC Future plan.

A draft environmental plan released by the FRA late last year has three alternatives as well as an option to do nothing at all. The FRA will select a preferred alternative in the fall, taking into account testimony it has collected at public hearings and the flood of public comments it has received.

The first proposed alternative is the most modest, keeping most of the existing routes from Washington, D.C., to Boston, while adding a new line near New London, a new New London-Mystic station and other lines that would circle Baltimore and New York.

That alternative that has raised the most concern in Connecticut because the rail lines would be re-routed  through Old Lyme. 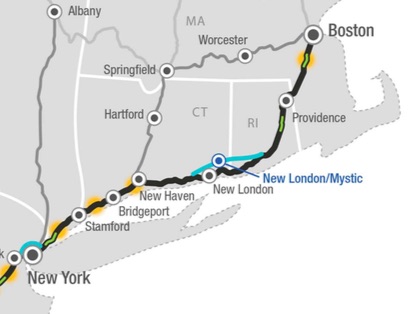 “I oppose Alternative 1 of the Northeast Corridor Futures Program because it would destroy the campus of the Lyme Academy College of Fine Arts at the University of New Haven,” said tens of dozens of comments to the FRA.

Christina Achorn wrote, “I am an alum from the Lyme Academy of Fine Arts. Please let the tradition of fine arts so precious in the area (to) remain intact and find somewhere else to disrupt.”

Someone who gave her name only as “Alison” said, “As a resident of Old Lyme since I was four years old, I have been surrounded by the beauty, culture, history and environment of this town. Alternative 1, the plan to upgrade the rail system by essentially sacrificing an historic town, is beyond comprehension.” 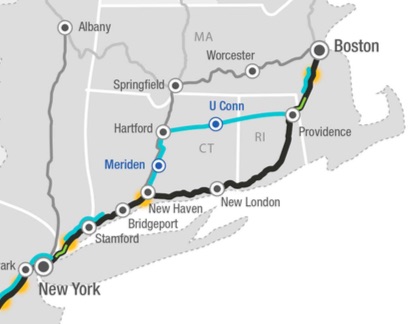 Last week, Sen. Richard Blumenthal, D-Conn. and Chris Murphy, D-Conn., as well as Rep. Joe Courtney, Dnd District, who represents Old Lyme, called on the FRA to meet with the Old Lyme community before moving forward with any plans for a new rail route through the historic town and reiterated their opposition to Alternative 1.

The proposed realignment outlined in Alternative 1 would shift the main rail line northward just before the Old Saybrook Station and run through several Connecticut and Rhode Island shoreline communities before reconnecting to the existing segment in Kenyon, R.I.

“One of the major proposals envisioned by NEC Future would re-route Amtrak through the heart of many historic towns and communities in our state, including Old Lyme,” the lawmakers wrote FRA Administrator Sarah Feinberg. 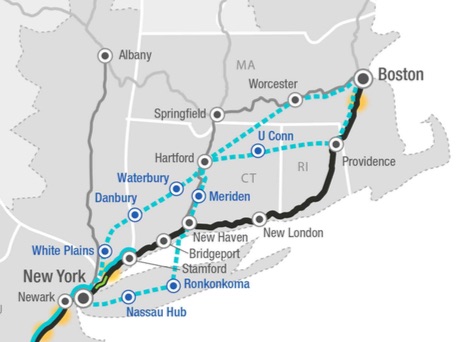 “We reject such a proposal, and call on you to ensure the final (decision) is absent any scenario that sends rail through Old Lyme,” they said.

Alternative 2 would be more ambitious, with the hope of making rail travel the dominant mode of transportation for intercity travelers and commuters in the Northeast. It would upgrade existing rail lines and provide additional tracks along much of the NEC “spine,” that is the Washington to Boston route.

This alternative calls for the corridor to run from New Haven to Hartford through Meriden, and then adds a new line from Hartford to Providence, R.I., with a stop near the University of Connecticut in Storrs.

Michael P. Adams-Kearns was among those writing in favor of this proposal.

“It is wonderful to think I could go to Willimantic and/or Storrs to get the train to Boston, and of course connect with the rest of the rest of the NEC system,” Adams-Kearns said.

The most ambitious, and expensive, proposal, backed by Amtrak, is  Alternative 3. It also calls for lines from New Haven to Hartford and from Hartford to Providence. But it would add another rail route from New York to Boston through Danbury.

Alternative 3 also includes another new option — from New York, through Long Island, to New Haven. This would require construction of a tunnel under Long Island Sound. 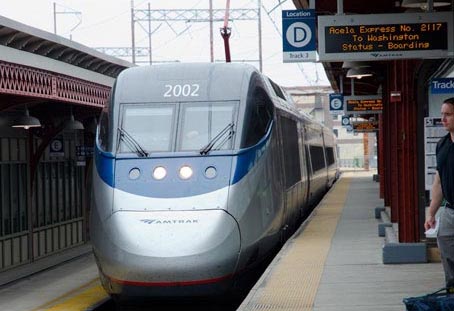 Alternative 3 would also introduce high-speed trains, traveling at up to 220 miles per hour, to the Northeast Corridor.

In his comments to the FRA, Boardman also said “Alternatives 1 and 2 offer only minimal capacity for growth,” while Alternative 3 would provide “true high-speed rail service comparable with the proven systems found internationally.”

Boardman also said he understood the FRA might decide on a “blend” of the alternatives it proposed.

With that in mind, the Amtrak CEO said, “The New Haven-Hartford-Providence-Boston route presents an alignment with more commercial activity within the proposed markets than the alternative New England routes evaluated.”