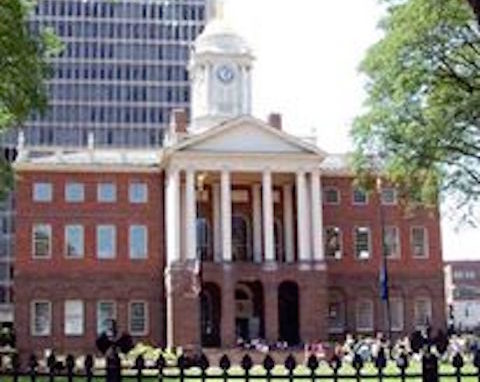 It looks like the Old State House won’t be stripped of its artifacts after all, but the Hartford landmark remains closed to the public while legislators and Gov. Dannel P. Malloy reconsider a budget provision that slashed funding and gave the building to a reluctant new landlord, the Department of Energy and Environmental Protection.

In a letter to legislative leaders, Malloy says he supports abandoning plans to transfer control of the building from the General Assembly’s Office of Legislative Management to DEEP, a responsibility the agency says it could not fulfill under the 2017 budget, prompting an order to empty and mothball the building.

House Speaker J. Brendan Sharkey, D-Hamden, said legislators will meet with the administration, but he called DEEP’s reaction “not only petulant, but illegal.” An administration spokesman says Sharkey appears to be the sole dissenting voice.

Malloy’s letter says that the 2017 budget provided DEEP with only $400,000 for the Old State House, while the legislature’s Office of Legislative Management spent $902,000 to operate the building in the fiscal year ending June 30, not the $500,000 originally estimated.

Without sufficient funds to operate and protect the Old State House, Commissioner Robert Klee of DEEP ordered that valuable paintings and other property on loan, including a Gilbert Stuart portrait of George Washington, be returned to the State Library, Wadsworth Atheneum and Connecticut Historical Society.

James P. Tracy, the executive director of legislative management, said Monday that the owners have been asked to keep the artifacts at the Old State House while a permanent solution for its management is being negotiated. Plans to transfer control are on hold, meaning Legislative Management still is maintaining the building and Capitol police are providing security.

Malloy praised the legislators for deciding to halt the transfer, at least temporarily.

“Pausing was the right thing to do,” Malloy said. “Now I believe we should work together to ensure that the current disruption ends soon, and that management of this important piece of Connecticut’s history stays with OLM, which had been managing it successfully for the past eight years.” 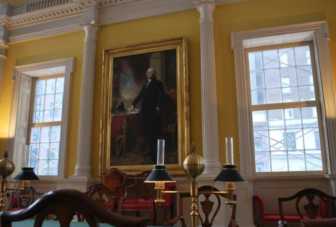 The Gilbert Stuart painting of George Washington in the Old State House.

“The governor has correctly assessed the situation. I think as an interim measure this is quite reasonable,” said Senate President Pro Tem Martin M. Looney, D-New Haven.

“The Old State House is obviously an important building and an important part of Connecticut’s history – that’s why the General Assembly took charge of operating it nearly a decade ago when the City of Hartford could no longer afford to maintain it,” Duff said. “This transfer of funds from the executive branch back to the legislative branch will allow us to maintain security at the building, and therefore maintain the repository of valuable and donated artworks there, while we discuss a new operating plan with DEEP and the Office of Legislative Management.”

But Sharkey strongly criticized the Malloy administration’s resistance to taking responsibility for the Old State House.

“I’m confused.  The governor understood that DEEP was assigned responsibility for the Old State House in the budget he signed into law last June,” Sharkey said. “I assume the governor directed his agency to follow the new law beginning July 1.  That’s why DEEP’s announcement that they simply don’t want the responsibility and are shutting down the Old State House seems not only petulant, but illegal.  Nonetheless, the legislature will certainly sit down with the governor’s office to try to resolve this situation, but it’s unfortunate that the administration’s fumbling of the issue has now created a political football.”

Chris McClure, an administration spokesman, said Sharkey has no reason to be confused.

“If the speaker is ‘confused,’ as he says, then it’s confusion by choice. Members of his own caucus have been involved in discussions around this issue when he himself has not,” McClure said. “Before chiming in, the speaker may have wanted to ask for a meeting himself, or talk to his own caucus. And before using sports analogies in the future, the speaker may want to first figure out where the game is being played and whether his own team was on the field.”

A budget provision transferring control of the building to DEEP caught the agency and the director of Legislative Management by surprise. It was an unwelcome responsibility, coming as it was amid the curtailing of hours and staffing at state parks and beaches because of budget cuts.

In 2008, the the General Assembly signed a lease giving it control of the Old State House after its owner, the financially strapped city of Hartford, indicated it could not afford to maintain the landmark, once the seat of government for Connecticut.

It hired the Connecticut Public Affairs Network, the operator of the CT-N cable channel that broadcasts legislative debates, hearings and other public affairs programming, to staff the building and provide tours and other programming. That contract terminated June 30.

Tracy said an unresolved question is whether the legislature can reinstate the contract, which cost about $325,000 annually. Without staff to greet the public and oversee visits, the building will remain closed, even if its collection remains intact and the building and its grounds are maintained by the legislature.