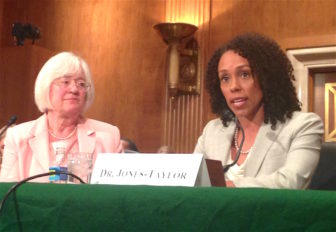 Deputy Commissioner Linda Goodman will serve as acting commissioner until a replacement is named “in the coming weeks,” according to the governor’s office.

“Never in my wildest dreams did I imagine I would have the good fortune of working alongside such dedicated and passionate people,” Jones-Taylor said in a statement. “Together we have accomplished great things, things many people thought would never happen in Connecticut.”

During Jones-Taylor’s three-year tenure, she successfully pushed for more capacity at publicly funded preschools, developed statewide learning standards for children from birth to age 5 and oversaw the effort to streamline a number of state programs.

The creation of the Office of Early Childhood allowed the state to streamline a number of programs – early care and education, Care4Kids, the Children’s Trust Fund, child care licensing, Birth to Three and Charts a Course Workforce Registry – that previously had been managed by five different state agencies.

Malloy and Lt. Gov. Nancy Wyman both praised Jones-Taylor for the accomplishments during her tenure. Wyman said “generations will benefit because of her leadership.”

“Under Myra’s steady leadership, Connecticut has increased access and availability of early childhood education – it’s so critical,” Malloy said. “We aim to ensure all kids enter school ready to learn, and we have made important strides during her tenure. Her passion, expertise and dedication to the well-being of children – especially those impacted by poverty – are extraordinary.”

The Office of Early Childhood had suffered a couple of setbacks in recent months, however.  Jones’ Taylor’s office announced it would change eligibility requirements for state daycare or preschool subsidies, causing thousands of low-income children to lose that financial support.

The decision came as the state program responsible for overseeing a combination of state and federal subsidies, Care4Kids, received notice that federal subsidies would decrease. State lawmakers approved a budget this year that did not offset the projected $34 million in additional funding the program would need in the coming year. In June, Jones-Taylor tried unsuccessfully to lobby Congress for additional funding.

Despite the setback, Malloy’s office said Jones-Taylor’s office has brought more than $50 million in new federal grants to the state over four years.