DDS layoffs to reach 605 as state moves to privatize services

Updated at 4:35 p.m. with additional comments.

Gov. Dannel P. Malloy’s administration unveiled plans Tuesday that would privatize 40 state-run group homes and a host of services for the intellectually disabled and eliminate the need for 605 state jobs, saving Connecticut almost $70 million annually by next fiscal year.

The changes at the Department of Developmental Services are planned to comply with a major reorganization and savings initiative the governor and the General Assembly ordered in May when they adopted the latest state budget.

The administration, which already has laid off 113 DDS employees, would eliminate another 492 workers in two stages, most happening after Jan. 1.

That means 25 percent of the full-time positions at the state agency are being eliminated.

The projected savings factor in the additional costs the state will incur by paying private providers to offer services to the thousands of clients currently receiving them from state employees.

“The plan follows national trends and best practices for reducing publicly run residential and larger institutional facilities and continuing on a path of providing cost effective, community-based options for individuals supported by DDS,” Morna A. Murray, the DDS commissioner, wrote to the governor’s budget chief Tuesday. “Community-based care provided by experienced non-profit organizations will ultimately allow Connecticut to afford to provide supports to the thousands of families currently waiting for services.”

“It is abundantly clear that there will be no loss in services available,” said Chris McClure, a spokesman for the governor’s budget office. 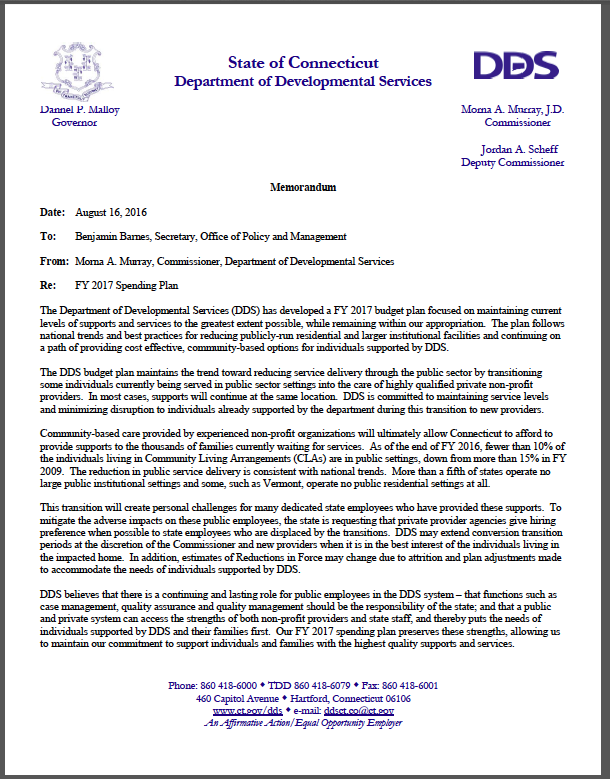 The overwhelming majority – 92 percent – of the 3,734 DDS clients who need housing live in privately run facilities, up from 85 percent in 2009. Twenty-one state-run group homes will remain after the closings announced Tuesday.

Among the programs being privatized are speech and language services, in-home support for caregivers, respite care and various behavioral support services.

“As the world changes, we must change with it, and state government must provide high-level services more efficiently. As we work to transform state government, these transitions will undoubtedly be difficult for the families and the employees, but they are nevertheless necessary to move government into the future,” said Ben Barnes, the Democratic governor’s budget and policy chief.

The state’s chief business lobby, which has been advocating increased reliance on private care providers for years, praised the administration Tuesday.

“We understand that decisions like the governor has made are never easy,” said Bonnie Stewart, the Connecticut Business and Industry Asssociation’s vice president for governmental affairs. “But given the state’s fiscal situation, tough choices need to be made.”

Malloy and legislators closed a projected deficit of nearly $1 billion in 2016-17 finances without raising taxes, largely through programmatic cuts and staffing reductions.

And the legislature’s nonpartisan Office of Fiscal Analysis reports there is another built-in hole of about $1.3 billion, or 7 percent, in the fiscal year that begins next July.

Stewart added that “there’s enormous opportunities where using nonprofits are concerned,” adding that shifting government programs to the private sector can improve outcomes and reduce costs. “We look forward to working with the governor and the legislature to further these initiatives in the upcoming legislative session.”

Ben Phillips, a spokesman for the union that represents about 90 of the state employees that will be laid off, called the plan “appalling.”

“The state is proceeding with this massive layoff without much of a plan for what happens to the services or the clients. Simply saying ‘we are going to privatize these jobs’ isn’t adequate. It is rarely easy and the quality of services in the private sector will never meet the level of care and services that the State currently provides,” said Phillips of CSEA-SEIU Local 2001.

“There also seems to be no consideration for the clients, for whom this will affect both their emotional and physical health. Remember, these clients are some of the most vulnerable residents in the state, many with severe autism and other developmental disabilities,” said Phillips.

“It is a very sad day for our state that we have decided to balance the budget on the backs of those with intellectual and developmental disabilities,” said Jennifer Schneider, a spokeswoman for the state’s largest health care workers’ union, SEIU 1199 — which also represents many of affected DDS workers.

The governor’s policy office and DDS are working to develop a more detailed plan for transitioning clients and will seek formal proposals from providers who want to offer services. Case management staff are making phone calls to each family affected by the change, and formal letters are also being mailed.

Will privatizing save money?

The state legislature’s investigative arm in 2011 reported that privately run facilities for DDS clients are not only much cheaper for the state, but also that their health inspections are better than those for state-run facilities.

The leader of the Connecticut Community Nonprofit Alliance called the administration’s plan smart.

“Community providers are the most cost-effective way to deliver high quality, life-sustaining services. We ask, however, for providers to be part of the discussion on how best to do that, to ensure adequate resources are available, while still delivering significant savings for taxpayers,” said Gian-Carl Casa, the leader of the group that lobbies at the state Capitol for nonprofits.

But union leaders cast doubt on the promise of large savings.

“There is not a guaranteed savings when work is privatized. In fact, it’s quite the opposite,” said Ben Phillips, a spokesman for CSEA-SEIU Local 2001. “There is a deficit of analysis of whether savings are real. The administration is just putting out numbers without any real analysis…They are not looking to see whether this work could be done more cost effectively in-house.”

The State Contracting Standards Board – created in 2007 in the wake of political corruption scandal involving state contractors and then Gov. John Rowland – has not yet completed a cost-benefit review of any of the increasing number of state services being outsourced.

“There are no conclusions yet,” said David Guay, the executive director of the board. “We are just beginning to peel apart that onion.”

That state watchdog agency is preparing now to do its first review of a privatization decision, the Department of Transportation’s decision to outsource bridge safety inspections.

State law requires that before a state agency outsources a service it must determine that the shift would cut costs by at least 10 percent and “will not diminish the quality of such service.”

It is also unclear how much flexibility the state will have as it replaces DDS workers with lower-paid private sector employees.

The District 1199 contract with the state – which expired July 1 – included protections for employees in the departments of developmental services and mental health and addiction services if the workforce were reduced because of a change to community-based programs. Affected employees would be offered employment in the same or comparable classification, at no reduction in salary grade, as long as they worked at the department as of July 1, 2009.

“The state is in negotiations for a successor agreement, and cannot discuss what issues are currently being negotiated,” said McClure.

The governor and the legislature ordered a significant reorganization of DDS under the $19.76 billion state budget enacted for the fiscal year that began July 1.

DDS had one of the largest departmental budgets in state government last fiscal year, spending in excess of $1 billion.

The department had been slated to receive $1.12 billion in the fiscal year that began July 1.  Instead, Malloy and legislators appropriated $525.1 million. They also transferred responsibility for various residential  and autism services — and $539.2 million to fund them — to the Department of Social Services.

Further complicating matters for DDS, the administration withheld another $6.6 million from DDS to help achieve omnibus savings targets built into the new budget. Most departments and agencies were subjected to these “holdbacks” to help control overall spending.

“We strongly disagree with the governor’s proposal to privatize these homes for the intellectually and developmentally disabled,” union spokeswoman Jennifer Schneider said. “The proposal decimates our state’s ability to provide services for the disabled. It should be a core function of our state to provide this service. Many of the intellectually disabled being served by state workers have been cared for by them for decades and are the only family they know.”

Even with the new planned layoffs at DDS, however, the state still is downsizing more slowly than the governor originally anticipated.

The governor announced in April he expected to eliminate about 1,900 to 2,000 state jobs through layoffs. A mid-June deadline was set, Malloy said, to ensure the state could reap the savings from these job cuts both during the last two pay periods of the outgoing fiscal year and during all of 2016-17.

But through Monday, the administration had announced just 825 Executive Branch layoffs. Combined with 239 layoffs ordered by the Judicial Branch, 1,064 permanent positions — about half of what the governor projected — have been eliminated.

The 492 remaining layoffs planned at DDS would lift the total to about 1,550.

In budget plans submitted by the leaders of 26 other state agency, they all announced that no additional layoffs of state employees would be necessary to balance their budgets.