Parents of intellectually disabled adults expected to be transferred from state-run group homes to private care reacted Tuesday with a mix of anger and appeals for compassion.

About three dozen parents, unionized caregivers and their clients argued at SEIU 1199 headquarters in Hartford that the planned privatization of 40 state-run homes would weaken care and shatter the bonds formed between workers and clients.

“We’re talking about love here; we’re not talking about money,” said Lindsay Mathews of New Haven, whose 51-year-old son, George, has resided at the state-run Brook Street group home in Hamden for the past 20 years. 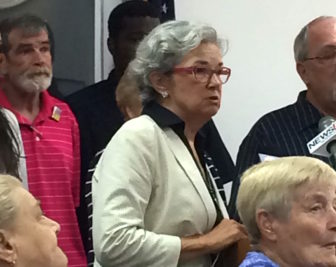 Lindsay Mathews of New Haven, whose 51-year-old son, George, has resided at the state-run Brook Street group home in Hamden for the past 20 years.

George cannot perform simple tasks, such as putting toothpaste on a brush or adjusting the water temperature in the shower, Mathews said. “Almost everything that has to happen to him is done by someone else,” she said. “These are the people we depend upon to keep our children alive.”

Critics of the private, nonprofit group homes for the developmentally disabled say they receive insufficient state funding to provide comparable care. They struggle with employee turnover rates that typically exceed 20 percent — which is a big problem given the close bonds clients seek to form with their caregivers.

“To take the staff away would be death for Arthur,” Martha Carney of Hamden said of the staff at the Brook Street home, where her adult son, Arthur, resides. “Please, Governor Malloy, come visit our home.”

Chris McClure, spokesman for the governor’s budget office, disagreed with the assertions regarding privatization.

“Let’s be clear — there should be no service level reductions involved here,” he said. “This is closely following national trends.”

Since 2009, the number of individuals served directly by the state Department of Developmental Services in community-living settings have dropped from 15 percent to less than 10 percent, he said.

“This step will save taxpayer dollars without affecting service levels,” McClure added. “We deeply value all the work of our employees, and while we know this transition will be difficult, we are doing everything we can to make the state operate more efficiently than ever before.”

The Malloy administration unveiled plans last week to privatize 40 group homes and a host of services for the intellectually disabled and eliminate the need for 605 state jobs, saving Connecticut almost $70 million annually by next fiscal year.

Those changes are planned to comply with a major reorganization and savings initiative the governor and the General Assembly ordered in May when they adopted the latest state budget.

The administration, which already has laid off 113 DDS employees, would eliminate another 492 workers in two stages, most happening after Jan. 1.’

That means 25 percent of the full-time positions at the state agency are being eliminated.

“Personally I think he (Malloy) should be arrested today and put on trial,” Mathews said. “These folks can’t speak for themselves.” 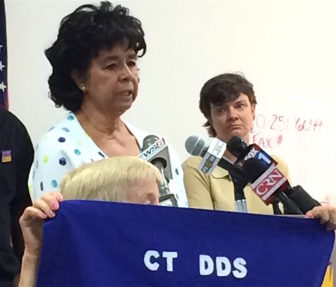 Carney said many parents are frustrated with legislators as well, adding that those she spoke with about the new state budget offered no assurances that things would change.

DDS Commissioner Morna Murray said her department “is working very hard to maintain current levels of services for the individuals we support in a budget environment that requires we provide high-level services more efficiently,” adding that many states have turned to privatization.

“While we know these changes are extremely difficult for individuals, families, and staff, they are necessary for us to maintain critical supports. We are committed to carrying out these transitions in the most effective and compassionate manner possible, and to maintaining the highest quality of care to the largest number of individuals we can support.”

But Debbie Albers, an 1199 member who runs the department’s Manchester Supporting Living program, said state workers’ have knowledge of their clients built over decades of service.

“I am their family,” said Albers, who has worked at the Manchester facility for 29 years.

“We’re like a family and we really need these staffs,” said Robert Osborne, a client at Manchester. “We don’t know what’s going to happen.”