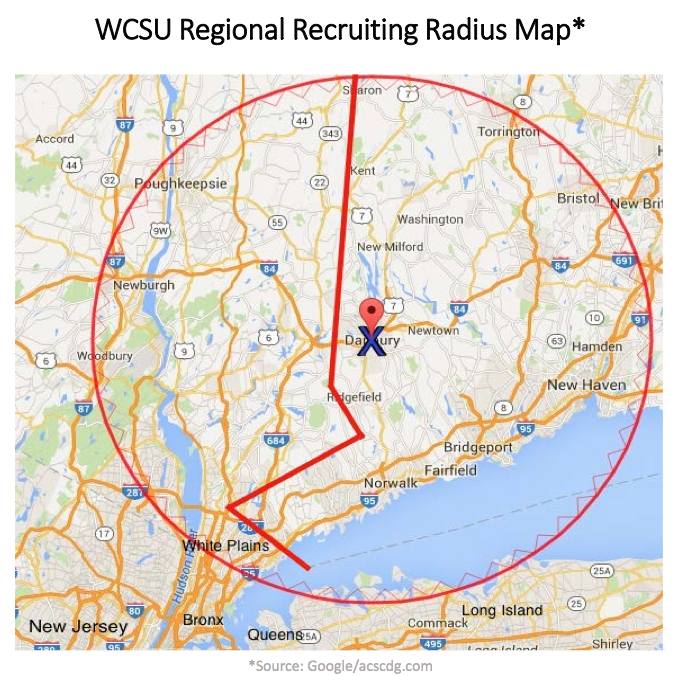 Over the last five school years, enrollment has dropped at the public university by 15 percent. This decline of 713 students has meant the school has had to raid its emergency reserves year after year – by about $2 million in each of the three most recent fiscal years.

Experiencing enrollment declines at nearly every one of the 12 community colleges and four regional state universities in their system, members of the Connecticut State Colleges & Universities’ finance panel on Thursday signed off on offering in-state tuition rates to residents of seven New York counties who attend Western Connecticut beginning next fall.

If successful, the board intends to consider expanding the approach system-wide.

“The future of Western and CSCU is at stake,” WCSU President John B. Clark told members of the finance and infrastructure committee. The plan is expected to win final approval from the full Board of Regents.

While the university in Danbury is located less than six miles from New York, Clark said, “that state border is a wall” because of the $22,000 in out-of-state tuition and fees New Yorkers must pay to go to WCSU.

This plan drops the cost for students from the bordering counties in New York to about $10,000.

“We are filling beds that are sitting idle,” said Richard Balducci, the chairman of the finance panel.

Clark expects this change to attract an additional 150 New York students in two school years, a small fraction of what the system actually needs to close a structural operating deficit.

“The big goal here is to restore WestConn to financial stability. We need 450 students at least,” he said. “We are at a very critical point in the juncture of WestConn.”

He said if the school is unable to reverse declining enrollment in the face of a drop in high-school-aged Connecticut students heading for college, then there is only one alternative.

“It’s either that or we have to look at increased savings from faculty and staff,” he said.

Earlier this month, the regents signed off on allowing Ashnuntuck Community College in Enfield to offer in-state rates to Massachusetts residents.

The number of Massachusetts students enrolling so far is up 46 percent over last year to 69 students.

Regents and college staff aren’t concerned with the tuition-price war this new approach may spur since other states already are luring Connecticut residents with these tuition tactics.

“We are the follower,” said Erika Steiner, the budget chief for the 90,000-student system. “We are losing students already.”