For Malloy and transportation, the campaign never ends 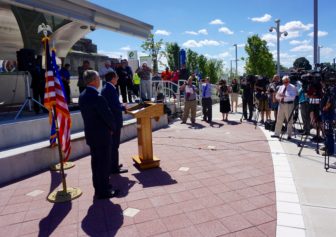 Gov. Dannel P. Malloy promoted improvements to Metro North two weeks ago in New Haven. Last week, he delivered an I-84 widening update at a construction site in Waterbury. On Tuesday, he visited a CTfastrak station in Hartford to mark the system’s four millionth passenger trip.

Even as the state struggles to find the revenue to match the governor’s ambitions, Malloy continues to promote transportation, celebrating small improvements and milestones in a state with nation’s busiest commuter rail line, an aging and underfunded highway infrastructure and a new bus-rapid transit system he says is quickly proving itself.

“I talk about transportation on an ongoing, almost daily basis, because if we don’t get it right  Connecticut is not going to grow its economy,” said Malloy, now approaching the midpoint in his second and most likely final four-year term as governor.

CTfastrak, as the Connecticut Department of Transportation branded the bus-rapid transit service that opened March 28, 2015, has been a favorite child of Malloy’s, an offspring whose every milestone is to be marked. It was a risky project Malloy approved in his first months in office, denigrated on talk radio as the “busway to nowhere.”

The heart of the system is a 9.4-mile dedicated busway from New Britain to Hartford that serves 11 stations. It also is used by express buses running between Hartford and Waterbury and buses that depart the busway for local routes to destinations such as WestFarms Mall, Central Connecticut State University and the UConn Health Center. 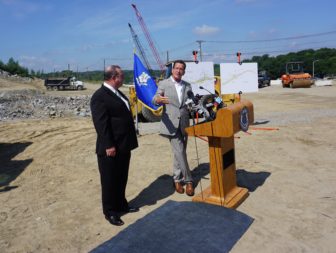 Malloy and Waterbury Mayor Neil O’Leary, standing on what will be part of I-84 in 2019.

“Ridership levels that we originally expected to see in 2030 are happening right now,” Malloy said Tuesday. “We have more than doubled ridership in the corridor. Before CTfastrak there were 8,000 passenger trips in the corridor on a weekday. Today we are averaging between 17,000 and 18,000 daily passenger trips.”

He spoke to reporters at a CTfastrak station in Hartford’s Parkville neighborhood, where an electronic sign advised riders of arrival times for buses on various routes. Buses run every 10 minutes during peak times, with more frequent service at some stations.

Daily weekday passenger trips on public transit buses in the CTfastrak service corridor averaged 17,402 in July, with the system hitting a record high Monday of about 20,000, said Michael Sanders, transit administrator for the Department of Transportation. The July average a year ago was 13,205.

Average weekend passenger trips last month was 10,899 on Saturdays and 5,399 on Sundays.

Sanders said the statistics released Tuesday were for all transit bus ridership in the corridor served by CTfastrak, which includes buses that run from Manchester Community College into Hartford and onto the busway, and express buses that run between Waterbury and Hartford, using the busway for a portion of their route.

The statistics cover ridership on the green CTfrastrak buses, the blue CT Transit buses that served the region prior to the new system, and express buses that use the busway for a portion of their routes southwest of Hartford. Excluded are CT Transit routes outside the core CTfastrak service area, such as routes to areas north of Hartford.

Of the 17,402 average daily passenger trips last month, 9,891 were aboard the green CTfastrak buses, 6,900 were aboard CT Transit local routes and 611 were on express buses that use the busway on routes between Hartford and Waterbury.

A year earlier, there were 7,850 average daily passenger trips aboard CTfastrak buses, 4,703 on CT Transit local routes and 651 on express buses.

Prior to the opening of the busway, CT Transit buses in the same area had 8,000 average daily passenger trips on weekdays, Sanders said.

“Nationally, pretty much everybody is reporting declines in riders except people like us reporting new rapid transit services,” Sanders said.

“With ridership growing faster than we thought, it’s interesting to know why this particular system has that appeal,” Redeker said. “Is it the frequency? Is it the amenities?”

Redeker said the study will try to determine how many passengers formerly drove their cars on I-84 into Hartford.

The busway was conceived during the administration of Gov. John G. Rowland and designed during the tenure of Gov. M. Jodi Rell, at least in part to relieve congestion on I-84. Widening the highway was deemed prohibitively expensive.

Not long after Malloy took office in January 2011, he had to decide whether to give the go-ahead for a busway project desperately sought by the underemployed construction trades. A red light meant having to return nearly $450 million in federal funds. Total costs were $567 million.

Malloy alluded Tuesday to the ridicule that greeted his approval of construction and the pessimism that’s dogged the system since it opened.

“I know we’re in Connecticut, and the glass is always half empty and there can be no good news,” Malloy said. “But the reality is that this thing is nothing but good news. It speaks well of the investments that we need to make in Connecticut.”