Washington – While the federal government was spending months soliciting feedback from the public on several alternatives for overhauling the railroads in the Northeast corridor, it had already identified a preferred plan that would dramatically change rail travel in Connecticut.

The Federal Railroad Administration’s preferred route — a hybrid of several put before the public — would upgrade the rail system in Fairfield County and along the Connecticut coastline, with a bypass that would take the trains through Old Lyme and other shoreline towns to Rhode Island. The overhaul, which would cost more than $135 billion, would also upgrade the rail line that runs through the center of the state to Hartford and then Springfield, Mass.

The FRA’s selection of the favored hybrid route, even as the agency spent months collecting more than 3,000 public comments and other input on three other alternatives, has sparked outrage among those who had hoped the agency would abandon its plans for a controversial routing option that would run through Old Lyme on its way east. They say that bypass route would destroy the town’s historic legacy.

“This is not just a flawed process, but it demonstrates bad faith…You have to include the public and you have to follow the law,” said Gregory Stroud, executive director of SECoast, a non-profit group that has partnered with the Connecticut Trust for Historic Preservation to stop the Old Lyme bypass.

Route selection is part of the federal rail authority’s NEC Future plan, which is meant to dramatically upgrade, and introduce high-speed rail, to the Northeast Corridor from Washington D.C. to Boston.

In November, the FRA released its three proposed new routes – and a do-nothing option  — and invited public comments to be considered before it was to settle on one plan later this year. Then a  second step in the process would begin – a detailed environmental impact study of the proposed route.

The FRA said it was considering three options:

But the FRA had already settled on a preferred route — a hybrid of Alternative 1 and Alternative 2.

That plan was revealed in an FRA document posted – at least briefly—on the web site of the Advisory Council on Historic Preservation, a federal agency tasked with preserving the nation’s historic resources.

Under federal law, the FRA was required to advise the historic preservation agencies in the eight states affected by NEC Future of its plans and obtain signatures from those agencies on a “programmatic agreement.” That agreement contains maps of the FRA’s preferred route. 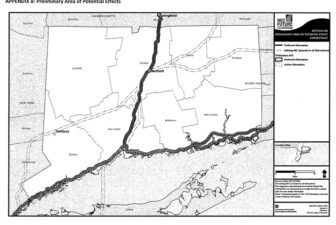 The map showing the preferred routes through Connecticut.

But the document – posted about 10 days ago – was removed from the ACHP web site on Wednesday.

ACHP spokesman Matt Spangler said the FRA asked his agency to take down the document.

He said his agency signed the programmatic agreement on August 25, “and as per our usual protocol, it was posted on the ACHP web site.”

“We were subsequently contacted by FRA, which requested we remove the PA,” he said.

Sen. Richard Blumenthal, D-Conn., who pressed the FRA to hold a public meeting on the proposed Old Lyme bypass last week, said “these documents raise serious concerns about the transparency and sincerity of this process and I have demanded a thorough explanation from FRA.”

Instead FRA spokesman Matthew Lehner said the agency “plans to make its recommendation for the future of the Northeast Corridor” later this year.

“We have not yet finalized the recommendation, though we are making progress toward its conclusion,” he said in an email. “Ultimately the recommendation will reflect the wide variety of opinions we have heard on the most effective way to bring faster, more reliable passenger rail service for millions of NEC commuters and travelers.”

E-mails from Connecticut Department of Transportation officials obtained through a Freedom of Information Act request show they were aware of the FRA’s preferred alternative for months.

In a Feb. 26 e-mail to CDOT chief James Redeker, Richard Andreski, the head of the CDOT’s Bureau of Public Transportation, said he had asked FRA official Rebecca Reyes-Alicea to add the so-called Hartford Line as an additional feeder line to that plan. The state-funded Hartford Line is “a key and necessary component of a broader New England passenger rail vision…,” its web site says.

Andreski wrote that the FRA “agreed to add the feeder line to as an additional feeder spine to the NEC with up to 4 intercity trains per hour originating or ending in Springfield.”Andreski also asked the FRA to make modifications in the bypass that would run though Old Lyme.

“Rebecca [of the FRA] explained the various adjustments they were making in response to public comments. For example, the Old Lyme Kenyon Bypass concept is being modified,” Andreski said. “Rebecca stated they recognize more work is needed on the alternative concepts and development of a near term strategy. Still I believe they are pressing forward on Alternative 2 with the mods described above.”

Andreski told the Connecticut Mirror he had the first indication there was a preferred route after speaking with FRA officials about 10 months ago. That’s about the time the FRA released its three-alternative plan for the public to consider.

Straud of SECoast said the disclosure of a preferred route “took everyone by surprise.”

“Since we’ve been following this we suspected [the FRA] would have an early decision, but this seems to suggest the FRA had no place for meaningful public discussion,” he said.