ConnDOT offers a plan, and a mea culpa, for I-84 in Hartford 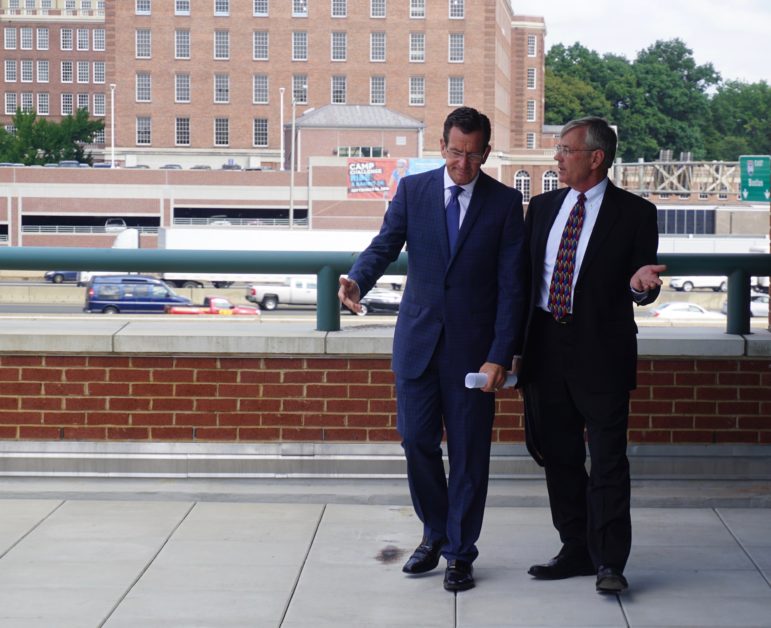 Gov. Dannel P. Malloy and Transportation Commissioner James P. Redeker consult before a press conference by the I-84 viaduct.

Can the same state agency that bulldozed vibrant neighborhoods and bisected Hartford with the construction of I-84 a half-century ago knit the city back together?

With the release Thursday of conceptual plans to replace the I-84 viaduct, the Connecticut Department of Transportation says it intends to do just that, creating as much as 45 acres of developable land by burying the highway and relocating rail lines.

“Rebuilding a city, rebuilding a rail line and rebuilding an interstate highway as one project is a pretty phenomenal opportunity,” said James P. Redeker, the state transportation commissioner.

On a terrace overlooking I-84, Redeker and Gov. Dannel P. Malloy said the state is pursuing an option that would demolish the elevated highway and place I-84 at or below grade, taking advantage of topography to cover a new highway with platforms and buildings.

The useful life of the I-84 viaduct is coming to an end at a time when state and federal transportation officials are taking a broader view of the damage highways wrought on American cities in service of the automobile and suburbanization.

In Boston, the elevated Central Artery that once separate the downtown from the North End and harbor is gone, hidden in a tunnel. I-95 through Providence is being relocated, restoring access to the waterfront. A highway viaduct in Seattle is being demolished and replaced by a tunnel. 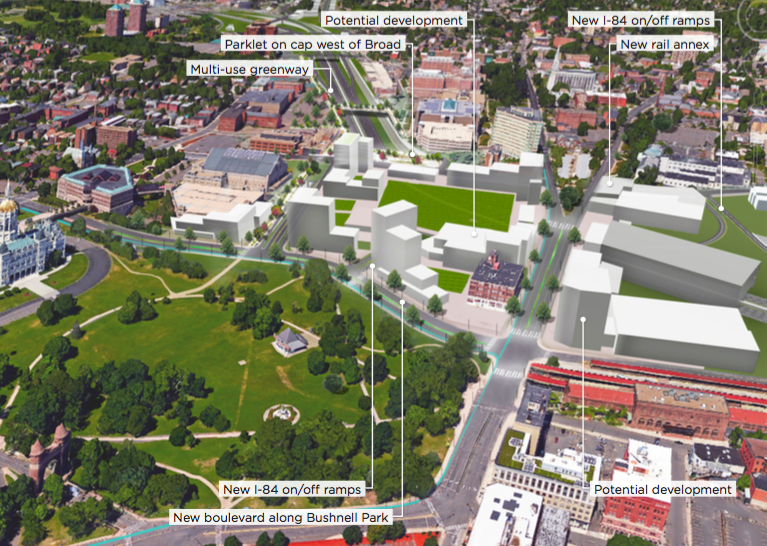 I-84 would disappear beneath air-rights developments as it enters downtown Hartford from the west.

ConnDOT and the U.S. DOT missed an opportunity to undo some of the damage in Hartford, refusing to cover the “I-84 canyon,” a trench separating the downtown from the North End, when the highway was widened in the 1980s.

“It is a completely different mindset and, in part, a recognition of just how hard these projects have been on our big cities,” Redeker said.

Redeker said evidence of the new approach is that federal transportation officials now work closely with the U.S. Department of Housing and Urban Development, viewing the necessity of replacing America’s aging infrastructure as an opportunity to make amends.

Hartford, he said, is a prime example of “a city that was pretty much destroyed, split apart based on construction with very different rules, very different guidelines and a very different mindset. it was about highways, not about the economy and the urban area.”

U.S. Transportation Secretary Anthony Foxx estimated in a speech delivered in March that nearly a half-million people were displaced by highway construction from 1957 to 1977, many in poor and black neighborhoods.

One of them was the section of Charlotte, N.C., where Foxx grew up.

“The people in my community at the time these decisions were made were actually not invisible,” he said. “It is just that at a certain stage in our history, they didn’t matter.”

“Sections of this roadway have a crash rate that is four times higher than other comparable state highways and, on an average, there are two crashes a day, often causing severe travel delays. We need a modernized, safer and more reliable I-84,” Malloy said.

Conceptual designs for replacing the I-84 viaduct came after meetings with neighborhood residents and others with an interest in the city.

Planners explored options that included rebuilding an elevated highway, placing it in a tunnel nearly a mile long or pursuing a compromise — an at-grade highway that could be decked over at an estimated cost of $4 billion to $5 billion. A tunnel could double the cost.

The formal step taken Thursday was the start of an environmental impact statement on the DOT’s conceptual plans, a step that should lead to final design work in 2019 and construction in 2021 or 2022.

Today’s ConnDOT has a statewide bicycle and pedestrian transportation plan, a belated acknowledgement that transportation, especially in urban settings, can be multi-modal, involving cars, trains, buses and even pedestrians and bicyclists.

It’s a conversation that didn’t take place 50 years ago. 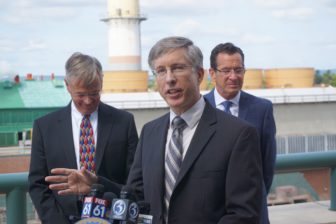 “It’s very, very indicative that we’re more holistic, more mindful of mulit-modal, ped, bicycle, connections to transit, where there are these opportunities,” said Rich Armstrong, the project’s principal engineer. “We think this is prime, by freeing up 40 to 45 acres of city land, that’s a huge opportunity we don’t want to miss.”

About 20 acres of land could become available near Sisson Avenue in the city’s West End, where the viaduct carrying I-84 begins. Another 20 to 25 acres open to development would be created near Asylum Hill and Bushnell Park.

DOT still is working to determine how or if I-84 can remain open during the demolition and construction.

“We haven’t made that decision,” Armstrong said. “We need to do a full engineering assessment on how exactly we’re going to build it. We’re going to look at a number of different, possible scenarios. We want to minimize the impact. A lot of people from the community and the businesses have asked that we consider hitting it hard and hitting it fast, make our improvements and get out as quickly as possible.”

The right of way will shift slightly, mainly to lessen curves and improve safety, but there is insufficient room to construct a new highway adjacent to the existing one.

Malloy interjected to make a plug for CTfastrak, the Hartford-to-New Britain busway that provides a commuting option to I-84 from the western suburbs. Its construction remains controversial, even as DOT officials say ridership is ahead of projections.

“We should point out that this project makes the CTfastrak look brilliant,” he said.