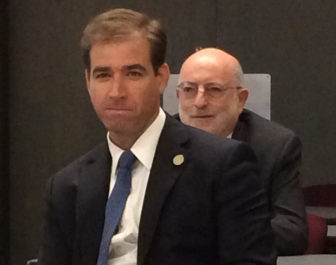 Bronin also warned that he may ask state officials to advance the city millions of dollars in education grants to help stem worsening cash-flow issues.

“We do not see a way the City of Hartford can avoid projected deficits on our own,” Bronin told the state’s Municipal Finance Advisory Commission.

Having already imposed deep spending cuts and a tax rate that far outstrips any other municipality’s, Hartford could not solve the problem even by “hollowing out” its vital public services like education and public safety — alternatives the mayor said no one should consider.

Though he didn’t propose specific changes, Bronin broadly suggested the solution should include drawing revenues both from sources within the city that don’t face taxation, as well as from those in the greater Hartford region.

The city not only has Connecticut’s highest property tax rate — at 74.29 mills or $74.29 for every $1,000 of assessed property value — but 51 percent of its property value is exempt from taxation. That includes hospitals, universities, an airport, a trash-to-energy plant, and numerous state offices and facilities.

“In my view, that’s a system that is broken … and long overdue for reform,” the mayor said.

So if dramatic reforms need to be made by the governor and General Assembly, why was the mayor talking with an eight-member advisory panel — comprised largely of municipal finance officers — that advises the administration on local budgetary issues?

Bronin made it clear he hopes the commission could help him make his case to Malloy and lawmakers in the months to come.

“You can give an opinion on how significant the challenge is and … if Hartford can become healthy with the tools that we have,” Bronin said. “I think having your insight as you look at these numbers … would be an important part of this process.”

And the numbers, the mayor added, are daunting.

Like the state and many municipalities, Hartford faces hefty payments to cover public-sector retirement benefits.

But the biggest cost driver, Bronin said, is the city’s bonded debt — most of which traditionally is associated with school, road and other infrastructure construction. But while payments on that debt grow over time, the city also refinanced that burden before Bronin’s administration began in January 2015.

He added that the city’s police force stands at about 380, down from 500 just a few years ago,

“We are not fat from a personnel standpoint,” he said.

Despite these cuts, Bronin said the city is struggling with cash flow problems. As a result he also is considering asking state officials to advance Hartford some of the nearly $201 million it is slated to receive this fiscal year through the Education Cost Sharing grant program.

The mayor did not offer specifics, but said early projections show cash flow could make it difficult to cover operating costs by next June, but others show it could become a problem as early as December, 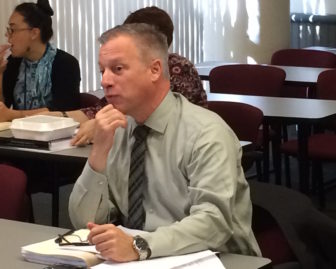 “Governor Malloy is committed to helping Hartford, the state’s capital, thrive and grow, as the state provides Hartford with more than a quarter billion dollars a year in municipal aid and has supported nearly 100 Hartford-based businesses via Small Business Express,” Malloy spokesman Chris McClure said. “We will review means to assist the city of Hartford when presented on the merits and feasibility.”

State government has faced its own cash flow issues in recent years.

Decades’ worth of fiscal gimmicks and a sluggish recovery from the Great Recession forced state Treasurer Denise L. Nappier to transfer funds temporarily on several occasions between 2012 and 2014 to enable Connecticut to pay its operating expenses.

Nappier established a line of emergency credit of $300 million in December 2012, though she never drew down those funds.

Nappier, under authority from the legislature and Malloy, borrowed $540 million specifically to improve cash flow in October 2013, and another $314 million to refinance a portion of the state’s $1 billion operating debt from the 2008-09 fiscal year.

According to the treasurer’s Sept. 1 monthly report on the state’s cash flow, she has not had to transfer funds temporarily from capital programs to cover operating costs since December 2014.

“I think the data you present is pretty compelling,” Thomas S. Hamilton, chief financial officer for the Norwalk public schools and chairman of the Municipal Finance Advisory Commission, told Bronin. “You don’t have the tools that you need.”

Hamilton noted, though, that the commission had just received its initial round of financial information on the city.  And he added that the final decision on all of the requests likely to come from the city would rest with the General Assembly and the governor.

Bronin also urged the advisory commission to issue any cost-cutting or other budget-balancing recommendations to the city.

“We want to make our books open, and we want to invite comment,” he said.