In a turbulent year, Malloy makes a soft landing at Sikorsky 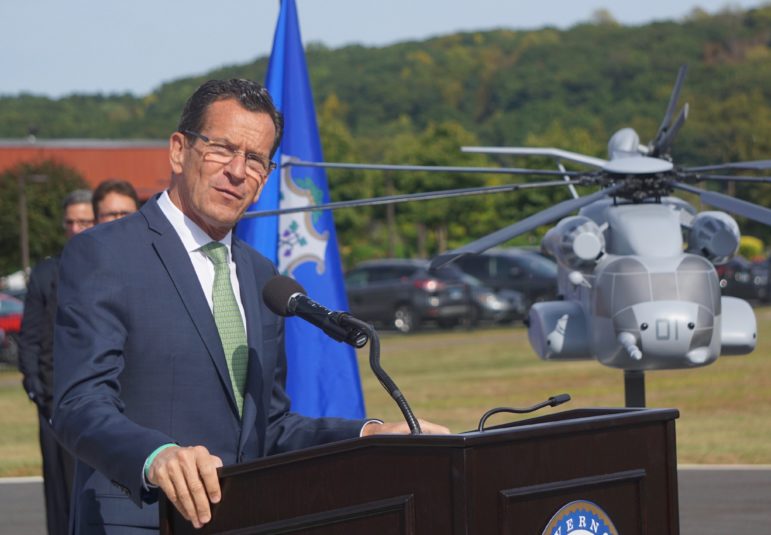 Gov. Dannel P. Malloy and a model of the CH-53K King Stallion.

Stratford — With a press conference Wednesday on the lawn of Sikorsky Aircraft, Gov. Dannel P. Malloy took a step toward rewriting his economic legacy from being the governor blamed for driving away General Electric and hundreds of headquarters jobs to the one who stabilized Connecticut’s aerospace industry for a generation.

Malloy told reporters that a deal to produce a new helicopter in Connecticut, which is contingent on ratification by the General Assembly next week and approval of an unspecified side agreement Sikorsky is seeking from its unionized workforce, grew from his lunch on June 2 with Sikorsky’s new president, Dan Schultz, who was being courted by other states.

“I got to tell you, on June 2 this was going to another state, and we turned it around — and we won it,” Malloy said. “There’s no bad news in that.”

With that line, Malloy made a bid to make the transition from the “governor who lost GE,” which relocated from Fairfield to Boston amid sharp criticism of the state’s fiscal policies and economic climate, to the man who saved Sikorsky.

Officials from Lockheed Martin, which purchased Sikorsky last year, would not confirm or contradict Malloy’s assessment, other than acknowledging that the company had been in serious talks with other states as a site to produce its next generation of helicopters, the CH-53K King Stallion, a heavy-lift aircraft.

“What I will say is we looked at a number of different states,” Lawrence Duncan III, the Lockheed Martin vice president of government relations who sought the luncheon, told CtMirror. “We were actively pursuing the best possible opportunity to build this helicopter for the Marine Corps. We’ve considered a number of locations. We communicated that to the governor and his people, and it led to the discussions that we’ve had about where Connecticut was relative to the other states we were considering.”

“Connecticut was not the cheapest state,” Schultz said during a brief press conference with Malloy. “I give a lot of credit to the governor going forward about taking this on and saying there is a way that Connecticut’ll be competitive. I think these proposals let us do that.”

Duncan said Sikorsky’s first choice was to produce the helicopter in Connecticut, where it has a trained work force, but the economics had to work.

“I think it’s important to note that Lockheed Martin has operations all over the United States. We are not historically rooted in Connecticut,” Duncan said. “As a new company coming to the state, it was important to us to reach out to the governor to express to him the challenges that we faced as a company and also the many competitive issues that we faced.”

The deal comes as Republicans are using the state’s economic and fiscal challenges — non-partisan analysts are projecting a budget shortfall next year of $1.2 billion — as the foundation of a campaign aimed at seizing control of the General Assembly from Democrats.

Senate Minority Leader Len Fasano, R-North Haven, strongly praised the terms Malloy negotiated with Lockheed Martin and Sikorsky, but he and House Minority Leader Themis Klarides, R-Derby, tried to blunt the political advantage for legislative Democrats by demanding that next week’s special session be expanded to a wide range of economic and budget issues.

Democratic legislators accused them of endangering the deal, even though Fasano said Republicans are not suggesting that their support for Sikorsky incentives was contingent on Democrats’ allowing them to introduce other bills.

“The Republicans cannot accept good news because it does not fit their negative narrative,” said Senate President Pro Tem Martin M. Looney, D-New Haven. “It is absolutely appalling that the Republican leaders, for their own political purposes, would endanger 8,000 jobs at Sikorsky and thousands more across their supply chain in Connecticut.”

“Boy, did we ever strike a frayed Democratic nerve with Sen. Looney,” Fasano said. “Republicans are simply offering a conversation, followed by a potential vote, on reasonable policies of bipartisan ideas which we could bring out in addition to taking up the separate Sikorsky bill.”

The governor’s office said the risk was turning the special session into part of the 2016 campaign for the General Assembly.

“Sen. Fasano and Rep. Klarides sat in a room yesterday with the governor, their fellow legislative leaders, and executives representing a company that has operated in Connecticut for more than 85 years, employs nearly 8,000 people in our state, and spends hundreds of millions dollars on other local companies in their supply chain,” said Kelly Donnelly, the governor’s spokesperson. “Those executives made a very clear and specific ask of everyone present. They asked us to partner with them by showing a united front on one simple, clear bill in a special session – a bill to keep Sikorsky headquartered and manufacturing in Connecticut. They said that doing otherwise would put jobs at risk.”

Despite the flap, Fasano and other Republicans gave political cover to the governor in support of the incentives, while stressing that economic problems remain.

“This agreement doesn’t solve all the other issues that are present in Connecticut. Yes, this is a good agreement,” said Sen. Kevin C. Kelly, R-Stratford. “If Connecticut didn’t do this you are looking at probably a reduction in at least half if not all the workforce at Sikorsky.”

Kelly, Fasano, Rep. Laura Hoydick of Stratford and Stratford Mayor John Harkins were among the Republicans to attend the event at Sikorsky. Fasano congratulated Malloy in front of reporters and later said during an interview that the incentives Malloy is offering Sikorsky are relatively modest in relation to what they will bring.

The total package is potentially worth $220 million through 2032. The state would pay $8.57 million in grants and up to $5.7 million in sales tax exemptions annually, while Sikorsky is promising to grow employment and increase the annual purchases it makes from its Connecticut suppliers by $350 million.

“It looks to me like an investment of $8 million gets a good return,” Fasano said of the grants. “There is a tremendous upside. Any venture capitalist would put money in this deal. That’s the way I look at it.”

Joe Brennan, the president of the Connecticut Business and Industry Association, which is making more than $400,000 in independent campaign expenditures this fall, nearly all of it in support of Republicans, said the deal would cement Sikorsky’s place in Connecticut and follows expansion commitments by Electric Boat and Pratt & Whitney Aircraft.

“It’s a big, big deal for Connecticut,” said Brennan, who joined Malloy at Sikorsky. “The supply chains at those three large companies is just enormous.”

Suppliers from Torrington, Enfield and Berlin attended the event Wednesday, demonstrating how the benefits of the agreement will reach beyond Sikorsky and its workforce.

“Right now they buy $400 million, $450 million a year in the supply chain in Connecticut,” Malloy said. “That’s going to go up by about $350 million, not overnight, but over time. It was important to me to get that. It shouldn’t just be Sikorsky people who are benefitting, it should be everybody in the state who are benefitting.”

Malloy said the deal with Sikorsky was a response to two factors: Connecticut remains an expensive place to do business; and other states were lining up to lure the company away.

He suggested his administration should get credit for reaching out to Electric Boat, United Technologies and Sikorsky, all of whom are investing in Connecticut, just as it was blamed for the departure of GE. Malloy said he is resigned to criticism that will come with any economic incentive deal.

Sikorsky is now winding down its production of the venerable Black Hawk, a helicopter it has produced for about 30 years, mainly for the U.S. Army. The U.S. Navy is the customer for the King Stallion, an aircraft that primarily will be flown by the Marines. It anticipates the purchase of about 200 aircraft, the first of which will be delivered in 2020.

Employment in Stratford will dip below 7,000 as Sikorsky retools its plant from producing the Black Hawk to the King Stallion, eventually increasing to 8,000. The hope is the helicopter will attract international customers, as did the Black Hawk.

If the company exceeds its target employment levels by 100 to 550 jobs in any given year, it will be eligible for an employment incentive of up to $1.9 million a year, with a potential maximum of $20 million over the life of the agreement.

Schultz declined to say if the company is seeking concessions from Teamsters Local Union 1150, which represents most of the production workers at Sikorsky. The union’s leadership, which met Wednesday with its members, has not commented. 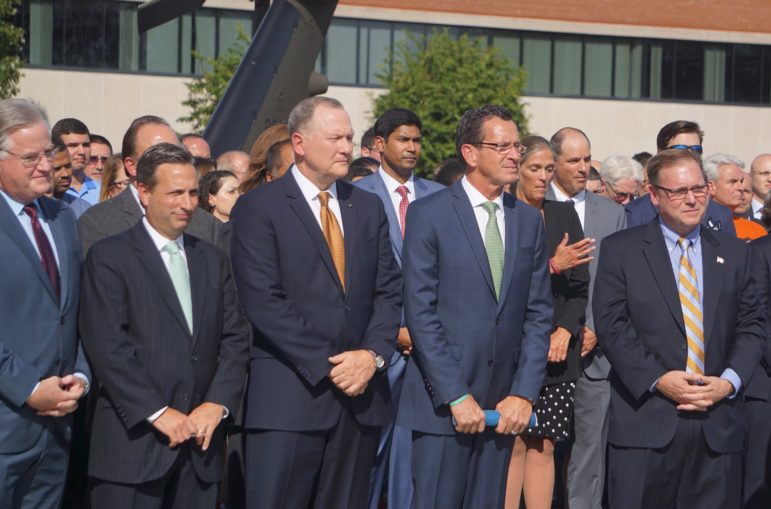