GOP: Deal to keep Sikorsky in Connecticut is good and bad news 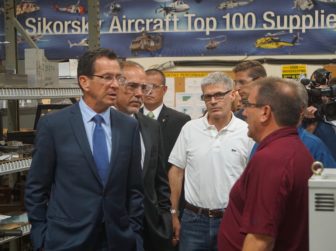 Most Republican legislators are expected Wednesday to support the Sikorsky Aircraft incentives deal negotiated by Gov. Dannel P. Malloy as a smart investment, while simultaneously arguing that the deal is necessary because of a high cost of doing business in Connecticut that they blame on the legislature’s Democratic majority.

“I think it’s a deal that’s important. It’s important to keep Sikorsky in Connecticut,” said House Minority Leader Themis Klarides, R-Derby.  “But you cannot take this out of context. You cannot just say, ‘Isn’t this a great deal? Look what we do for business.’ ”

“We must seize the opportunity created by the governor calling us into special session next week and begin the hard work of reforming our state’s fiscal policies now,” Fasano said. “We must send a signal to businesses large and small as well as taxpayers, our constituents, and municipal leaders that we are committed to real structural change.”

Malloy issued a call Friday for a special session Wednesday to consider only legislation to “sustain job growth in our state’s robust helicopter aerospace manufacturing sector.” On Thursday and again Friday he urged legislators to set aside the urge to score political points in a  rare special session to be held six weeks before election day.

“The vote for it is a no brainer, quite frankly,” Malloy said after touring the Cambridge Specialty Company in Berlin, a piece of the Sikorsky supply chain, which extends to at least 82 of the state’s 169 municipalities. “I think you can compare our agreement to any other agreement that’s been reached in aerospace. This comes out pretty strongly.”

On that point at least, the Democratic governor is getting solid support from key Republicans.

Sen. Scott Frantz of Greenwich, a businessman and the ranking Republican on the legislature’s Commerce Committee, said the terms Malloy negotiated are attractive. For incentives that could total up to $220 million through 2032, the state will reap the benefit of $21.1 billion in wages and benefits, plus $350 million in new annual business with its network of suppliers in Connecticut.

“The multiplier effects in the aerospace industry are as big as any industry,” Frantz said.

Klarides declined to estimate the extent of support among House Republicans until after they meet Monday with Sikorsky officials.

Sikorsky, which was acquired by Lockheed Martin last year, was looking at other states with cheaper labor and other costs to produce the CH-53K King Stallion, a new heavy-lift helicopter scheduled to go into production in 2019. The company expects orders for nearly 200 King Stallions from the U.S. Navy for use by the Marines.

It promises to produce the helicopters in Connecticut and keep its headquarters in the state, contingent on the General Assembly approving the incentive deal and Teamsters Union Local 1150 accepting new contract terms not disclosed by the union or company.

The state would grant Lockheed Martin $8.57 million in grants and up to $5.7 million in sales tax exemptions annually, pegged to Sikorsky’s meeting benchmarks for employment, capital investments and purchases made through its Connecticut supply chain. The company could earn annual bonuses of $1.9 million by exceeding employment targets, up to $20 million over the life of the agreement.

Malloy’s visit Friday to Cambridge Speciality was meant to underscore how spending by Sikorsky ripples across Connecticut.

Mark A. Labbe, the president and chief operating officer of Cambridge, said the company employs 75 workers manufacturing parts for aerospace companies, with nearly two-thirds of its business coming from Sikorsky.

A portion of the incentives offered Sikorsky are pegged to the company’s increasing its reliance on Connecticut suppliers. Cambridge already is gearing up for increased work with renovations to one of its two facilities in Berlin, and it in turn relies on other Connecticut companies for a portion of the work.

After a tour, Malloy and company officials met with reporters.

“Tell them how many suppliers you have,” Malloy said.

“We have a local supply base that’s 50 to a hundred suppliers that we typically outsource product to, whether it’s machine or special processes,” Labbe said.

Two of them were in the same industrial park in Berlin.

“This is good, not only for us, but every other supplier in Connecticut,” Labbe said.

The company’s role as a key supplier to Sikorsky was evident in the invitations to Labbe and Peter M. Campanella, the chief executive officer, to attend the roll-out ceremony for the CH-53K in West Palm Beach, Fla, where four test aircraft were assembled. Labbe also was a guest at Malloy’s press conference Wednesday at Sikorsky with the company’s president, Dan Schultz.

Malloy said he could see no reason why anyone would vote against the incentives.

Sen. Joseph Markley, R-Southington, a conservative offered one: It is a form of corporate welfare, something opposed on principle by elements of the political left and right.

“I feel the principle of corporate welfare, and I don’t know another word for it, put us in this position. We have to recognize that what we do that’s useful to one business is costly to every other business and taxpayers,” Markley said. “My inclination is against this.”

Aresimowicz, who is the head football coach at Berlin High School, said passage will come easily.

“Being the football coach, we’re on the goal line,” Aresimowicz said. “And when we go in Wednesday, we just have to push the ball over the goal line.”