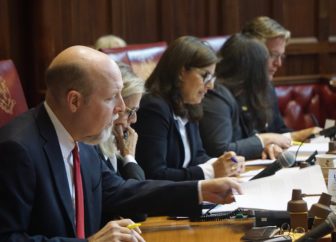 Sen. Joe Markley, the only no vote in the Senate, and colleagues reading the Sikorsky legislation,

Connecticut legislators took a one-day break from re-election campaigns Wednesday to give bipartisan blessing to a $220 million incentive deal for Lockheed Martin that would keep its Sikorsky Aircraft subsidiary and production of its next generation of helicopters in a state desperate to keep its storied aerospace industry.

At a State Capitol inured to economic gloom, most legislators embraced the Sikorsky deal as a cause for celebration, a victory that promises to pump $69.2 billion into the economy over 14 years, while saving thousands of jobs at Sikorsky’s sprawling plant in Stratford and at more than 300 suppliers throughout the state.

“Competition in today’s worldwide economic climate is fierce, and Connecticut is showing that we remain a valued leader where businesses can maintain a competitive edge well into the future,” Gov. Dannel P. Malloy said after final passage.

“This is an extraordinary coup for the state of Connecticut to have this new line of helicopters produced here,” said Senate President Pro Tem Martin M. Looney, D-New Haven. Connecticut was in competition with four other states: Georgia, Florida, South Carolina and Texas.

Republicans, who are trying to win control of the legislature with a campaign focused on the state’s unsettled business climate and fiscal setbacks under the Democratic majority, lavishly praised the terms negotiated by the administration of a Democratic governor, while arguing that extensive work remains to turn around the economy.

The state’s economy has grown at an anemic annual rate of six-tenths of one percent, and six years after the end of the recession the private sector has recovered only 103,200 of the 111,700 jobs lost.

“You need to grow at 3 or 4 percent, especially if you are coming out of a deep recession,” said Sen. Scott Frantz, R-Greenwich, a critic of other state incentive deals.

“This one is justified, there is no doubt about it,” Frantz said. “It is a strong winner for the state of Connecticut.”

Sen. Kevin Kelly, R-Stratford, said the incentives ensure “that good-paying jobs stay in our state, that we’re going to keep them here. These are the types of jobs that can pay a mortgage and educate our kids.”

Six Republicans opposed the deal in the House: Tim Ackert of Coventry, Sam Belsito of Tolland, Doug Dubitsky of Chaplin, Mike France of Ledyard, Robert C. Sampson of Wolcott and Richard A. Smith of New Fairfield.

Markley said he understood the desire of his colleagues to support a deal that keeps Sikorsky in the state, but he would oppose it as a matter of principle, saying the state has no place offering “corporate welfare,” even given the iconic nature of Sikorsky and its impact on the economy.

Lawrence Duncan III, the vice president for government affairs at Lockheed, center, with lobbyists Keith Stover and Susan Halpin in the Senate gallery.

“The ugliest term that comes up is crony capitalism,” Markley said.

Even with the incentives and new production, Sikorsky’s current employment of 7,855 is projected to drop to 6,582 over the next six years, based on dwindling orders for the Black Hawk, an Army helicopter. The deal calls for employment to exceed 7,200 in 2024 and top 8,000 in 2032.

Annual payroll targets would grow from $655 million to $986.8 million and targeted purchases from Connecticut suppliers would go from $328.5 million to $667.1, according to an analysis of by the non-partisan Office of Legislative Research.

Senate Minority Leader Len Fasano, R-North Haven, praised Malloy and Catherine Smith, the economic development commissioner who sat in the chamber during the debate, for crafting what he called “not a corporate bailout, but an investment.”

Fasano said the deal is a victory, but it also reinforces the competitive disadvantages of doing business in Connecticut

Without offering a detailed analysis, Lockheed has told legislators that the company faced higher costs of $400 million over the life of the agreement by producing the CH-53K King Stallion in Stratford rather than in a new facility in one of the competing states.

The four prototypes now being tested were built in Florida. Sikorsky expects the Navy to buy nearly 200 King Stallions, with hopes for additional foreign sales.

Lawrence Duncan III, the vice president of government affairs for Lockheed, shook hands with one of the company’s local lobbyists, Keith J. Stover, after final passage and smiled and raised his arms in a victory salute after legislators noticed him in the House gallery.

“We’re gratified that the legislature acted in such a strong, bipartisan way,” Duncan said. He thanked Malloy and Smith for acting so quickly to strike a deal after opening talks with Lockheed on June 2.

Production of the CH-53K in Stratford also is contingent on the approval of concessions from Teamsters Local Union 1150. A vote is scheduled for Oct. 9.

Democrats rejected a motion by Fasano to continue the special session and deal with other economic issues, many central to the GOP campaign for control of the Senate. House Minority Leader Themis Klarides, R-Derby, said the need for incentives ultimately represented a failure on Connecticut’s part.

House Majority Leader Joe Aresimowicz, D-Berlin, noted that the states rated as the most friendly to business also compete with incentives.

“They’re all offering incentives to companies to stay,” he said.

Some Democrats acknowledged that the incentives come after a difficult period, one where much of the job recovery came in lower-paying service jobs.

“We have been in a downward spiral, and we all know that,” said Sen. Steve Cassano, D-Manchester, whose east-of-the-river district is home to dozens of machine shops that supply Pratt & Whitney and Sikorsky.

Cassano said the Sikorsky deal, combined with plans by Pratt & Whitney to hire 8,000 workers to cope with retirements and a backlog in jet-engine orders from commercial airlines, is a step toward reversing that downward trend. The average job at Sikorsky pays $94,000.

Even studies that rate the state poorly for its business climate give the state high marks for quality of life, productivity and a skilled workforce, he said.

“Quality of life really isn’t much if you can’t afford to go anywhere, if you don’t have a job that pays,” Cassano said. “These are jobs that pay.”

Sen. Catherine Osten, D-Sprague, whose eastern Connecticut district suffered job losses in the recession, said the deal was to be celebrated as an unalloyed piece of good news.