And while the administration said Monday the Sept. 6 memo used “extremely conservative” revenue estimates while directing agency heads to be frugal, Republican legislative leaders amplified their charges that the Democratic governor is hiding red ink until after the November elections.

“Governor Malloy should tell the legislature the truth,” Senate Minority Leader Len Fasano, R-North Haven, said. “He owes us that. He owes the public the decency of telling us accurate numbers.”

Malloy budget director Ben Barnes “has an obligation to answer this: Which one is it? Which of these numbers are real?” said House Minority Leader Themis Klarides, R-Derby.  “This is yet another reason why people do not trust politicians.”

The two sets of numbers Klarides is referring to involve the revenues needed to support the $19.7 billion budget Malloy and his fellow Democrats in the legislature’s majority enacted in May for the 2016-17 fiscal year.

Shortly after the budget was approved, analysts noted that summer income, sales and corporation tax receipts were weaker than anticipated. Since then, administration plans to save money from layoffs have progressed much more slowly than anticipated, further raising concerns about whether the new budget was balanced.

Still, the administration has reported no problems with the budget since the fiscal year began on July 1. It’s last monthly budget projection, filed Sept. 20 with Lembo’s office, held that finances were in balance and that revenues for the General Fund — which covers most operating costs in the budget — were coming in as anticipated.

Yet two weeks earlier, in a Sept. 6 memo imploring all agency heads to keep their spending requests lean in the next budget, Barnes estimated that General Fund revenues in the current budget would total $17.75 billion — $133 million less than the amount needed to balance the current budget. 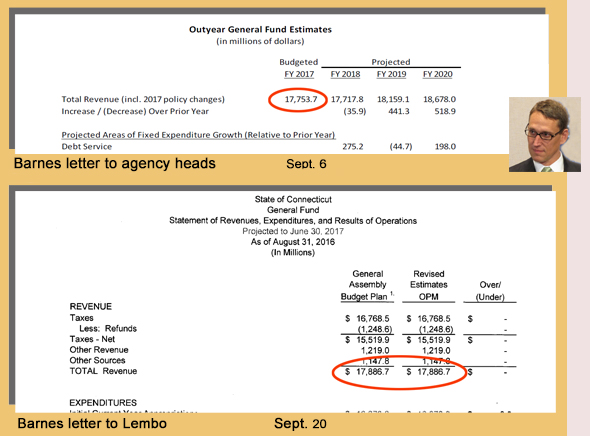 Why was that projection not reported to Lembo on Sept. 20, especially given the weak tax returns during the summer?

”The estimates of revenue that we used [in the memo to agency heads] were extremely conservative and reflected the revenue weakness that occurred late in FY 16,” Malloy spokesman Chris McClure said, adding that since late summer, revenue trends have been “satisfactory.”

McClure also noted that the state recently settled a lawsuit with RBS Securities, and that the investment bank agreed to pay the state $120 million.

“Naturally we hope that economic progress continues and we will be able to achieve structural balance in the coming (two-year budget) with fewer service reductions,” McClure added. “For now we will use the most conservative assumptions as we develop our plans.”

The comptroller must decide each month whether to certify the governor’s budget projection, and traditionally does. Lembo, who has certified all of Malloy’s reports this fiscal year, has nonetheless expressed concerns in writing about both tax revenues and challenges in cutting costs.

When asked about the $133 million revenue shortfall reported to agency heads — but not his office — on Sept. 6, Lembo issued a one-sentence written statement: “We will look into this latest report.”

Both Klarides and Fasano said Lembo, also a Democrat, has a responsibility to help clarify this matter.

The administration must file one more budget forecast before the election, due on Oct. 20. Lembo must make his decision whether to certify that forecast on Nov. 1.

“Kevin Lembo should be concerned. The comptroller is the elected official who is supposed to be in charge of these numbers,” Klarides said. “They gave him misleading numbers, allowing him to go out and tell people everything is rosy in the state of Connecticut. It’s not.”