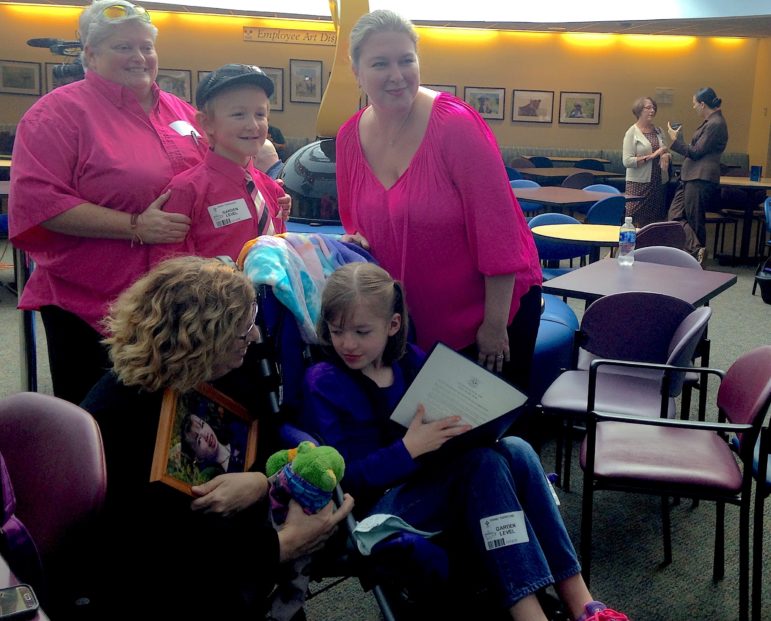 Susan Meehan shows West Tarricone, 8, a photograph of her daughter, Cyndimae, who died in March. Meehan helped inspire the push to legalize medical marijuana for minors in Connecticut. West’s parents, Diane and Cara, are applying for West to access it to address her seizures.

Henry Lloyd doesn’t much like the taste of the cannabis oil he started taking last week in hopes of controlling his catastrophic epilepsy. But compared to the 20 or more pills the Stonington 7-year-old takes each day, he calls it “easy peasy,” his mother, Linda, said.

The dose is tiny; it will be scaled up over time. And his parents are cautious in assessing whether it’s made a difference so far – the question everyone seems to ask them since Henry became the first child in Connecticut to lawfully take the drug for palliative purposes, something that became legal this month. 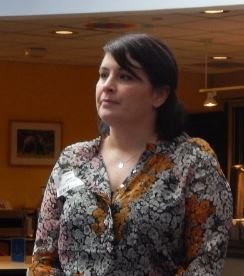 “The thing I can say is he’s at school today,” Linda Lloyd said Thursday. That’s not always possible. He’s had a couple days without a tonic-clonic seizure – unusual for him. Still, she and her husband, Chris, said they’re not ready to broadcast any major success yet.

Henry is one of three minors who now have approval to participate in Connecticut’s medical marijuana program. Two other minors have applications pending, according to the Department of Consumer Protection, which oversees the program. Another, whose application was approved, died.

To qualify, children or teens must have one of six conditions – cerebral palsy, cystic fibrosis, severe epilepsy, a terminal illness requiring end-of-life care, or irreversible spinal cord injury with objective neurological indication of intractable spasticity. Minors must have the permission of a parent or guardian and two physicians, and cannot receive a form of the drug that can be smoked or vaporized. Analysts have projected that fewer than 100 children are likely to participate.

Connecticut legalized the use of marijuana for palliative purposes for adults in 2012 but was, until this year, the only state with a comprehensive medical marijuana program that did not allow access for minors, according to the National Conference on State Legislatures.

When legislators considered the bill to expand the program to minors earlier this year, opponents cited a need for more research and concerns about the impact of marijuana on the developing brain.

But it passed the House and Senate by wide margins. Many legislators pointed to the stories of parents of children whose debilitating seizures had not been controlled by countless medications or other treatments.

Now those families are beginning to receive the substance they hope can help their children – or are in the process of applying for it.

Among them are Diane and Cara Tarricone of North Windham, whose 8-year-old daughter, West, has severe seizures. West’s neurologist has written a letter granting permission, and they’re scheduled to meet with her primary care provider about it later this month.

West has tried 23 different treatment options, including medications, a specialized diet and steroids, but they have not helped the seizures, and many have brought severe side effects. At one point, she stopped speaking.

The remaining options, aside from marijuana: being placed in a medically induced coma, having surgery to separate the hemispheres of her brain, or having a device implanted to supply electrical impulses. And the coma and surgery probably wouldn’t cure the seizures, but simply buy more time without them, Cara Tarricone said.

When the bill passed in April, Tarricone was thrilled. But she also worried about the wait until it would take effect Oct. 1.

In fact, West was in the hospital for 16 days in September. 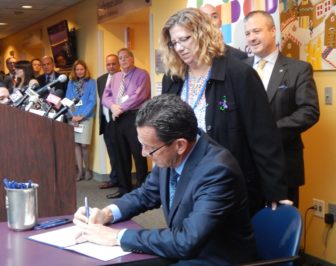 Gov. Dannel P. Malloy ceremonially signs the bill legalizing the use of medical marijuana for minors. Behind him are Susan Meehan and Consumer Protection Commissioner Jonathan Harris.

They returned to Connecticut Children’s Medical Center in Hartford for the ceremony Thursday, which included a ceremonial bill signing by Gov. Dannel P. Malloy. They saw several parents who have connected through advocacy for the measure. Tarricone runs a Facebook group on the topic, and said she will probably shift its focus to sharing “how-to” information and what has or hasn’t worked. She expects some parents will struggle with getting permission from their doctors, and noted that not all hospitals will let families administer it while their children are there.

Susan Meehan, who spoke during Thursday’s ceremony, said Connecticut has more to do, including ensuring that children can attend public schools with marijuana medication.

“Connecticut has a lot to learn, but you have a foundation of an amazing program,” she said. “This milestone is the very first step, the beginning of a journey that has the potential to save many lives and improve the quality of life for many children.”

Meehan helped inspire the first bill to extend the medical marijuana program to minors, which was proposed last year. After it failed to pass, Meehan’s family moved from Oakdale to Maine, where her daughter, Cyndimae, could legally use cannabis for her debilitating seizures.

The cannabis-based medications changed Cyndimae’s life, Meehan said, reducing her seizures by more than 90 percent. Instead of sitting in a wheelchair, she could run and play on the swings. Cyndimae and Susan Meehan returned to Connecticut in March to testify for this year’s bill.

Days later, Cyndimae died from sudden unexplained death in epilepsy. She was 13.

Malloy, whose administration pushed for the bill, addressed Meehan during his remarks.

“Susan, to you and your family that suffered so mightily because we were so slow, I do apologize, but I also thank you because through your suffering, you and your daughter were able to come forward and convince a recalcitrant state and members of the legislature to do the right thing,” the governor said.

“The fear of the unknown has stopped many good things from happening in a more timely fashion,” Malloy said. “The idea that we would go so far with development of opioids and would at the same time ignore the possibility of cannabis really makes no sense.”

Dr. William Zempsky, head of the division of pain and palliative medicine at Connecticut Children’s, said that while more research is needed, it was clear that some of the most vulnerable patients are children who would benefit from the use of marijuana. He works with children receiving end-of-life care or who have intractable daily pain. Often, opioids are ineffective and leave patients with side effects that can severely limit their quality of life to the point that they’re unable to enjoy time with family and friends.

“I want to be clear that medical marijuana is not a panacea,” he said. It must be used as part of a comprehensive, holistic plan to improve the quality of life for a child.

And Zempsky said that concerns about its abuse, the long-term neuropsychiatric side effects and potential misuse are valid. He noted that the law passed in April also allows for state-approved research into medical marijuana, which could help address those concerns.