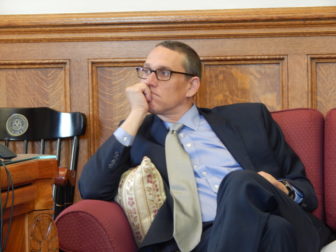 The state budget is running a deficit — albeit a small one — the legislature’s nonpartisan Office of Fiscal Analysis reported Thursday. But it could have big political repercussions.

While the $77.9 million deficit represents just under one-half of 1 percent of the General Fund, it confirms longstanding charges by Republican legislative leaders that the budget Gov. Dannel P. Malloy and his fellow Democrats in the legislature’s majority adopted last May is out of balance.

Thursday’s report also potentially places significant pressure on Comptroller Kevin P. Lembo, who must issue the last forecast on the state budget that will come before the Nov. 8 elections.

According to nonpartisan analysts, revenues are on pace to fall $24 million shy of budgeted levels, and would be in worse shape had the state not reached a settlement with a Stamford investment bank that produced a one-time, $80 million payment to the state.

General Fund tax receipts are running $104 million off pace, chiefly because of an $80 million projected shortfall in the income tax.

This $104 million shortfall is not far from the $133 million revenue gap the Malloy administration warned departmental heads about last month — a projection the administration is calling “extremely conservative.”

On the spending side, state government is staring at $76.6 million in potential cost overruns. 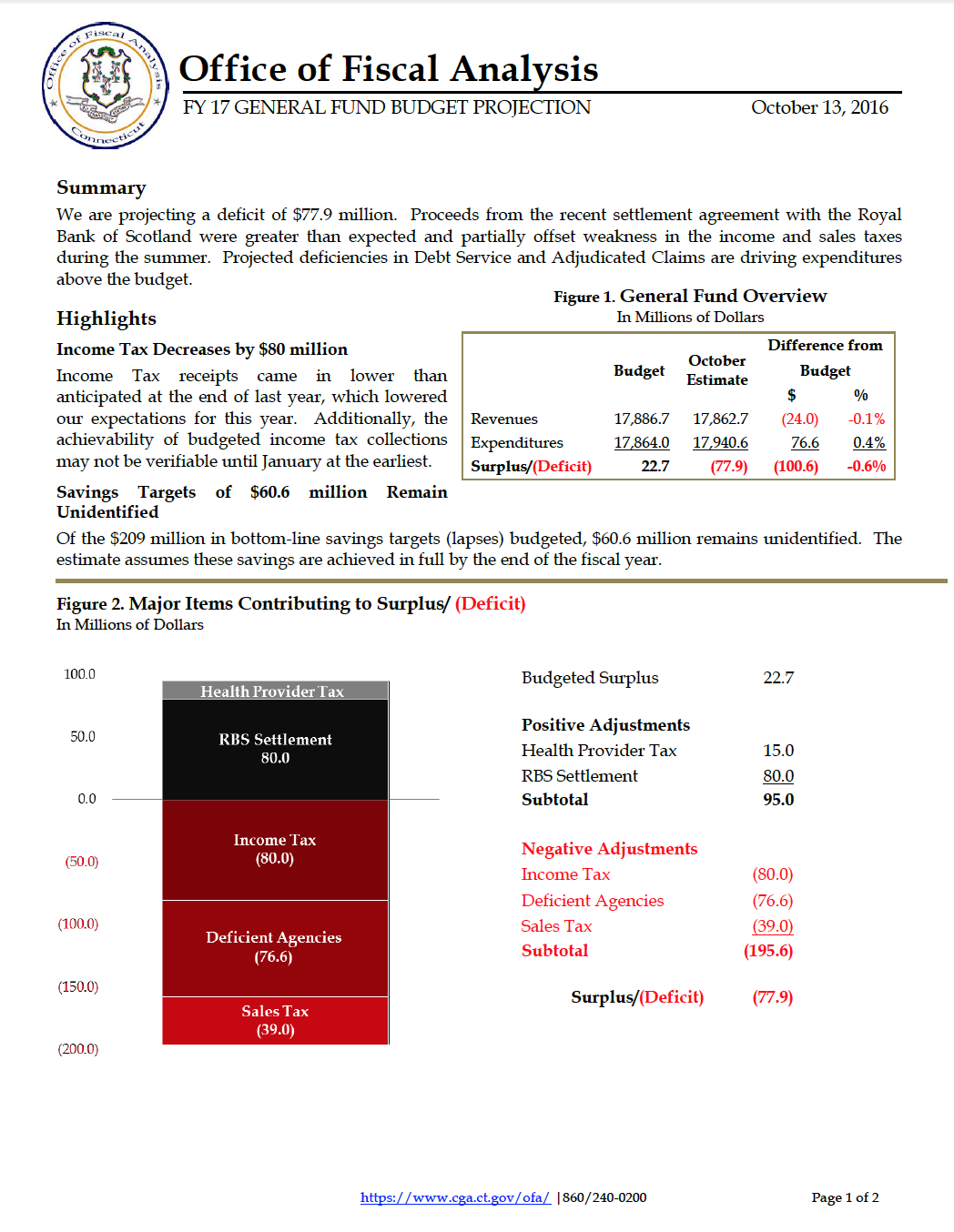 The biggest problem to date involves analysts’ fears that debt costs will run $51 million over projections.

Though the OFA report outlines $100.6 million in red ink for the General Fund – $24 million in net revenue loss and $76.6 million in cost overruns – the fund was written to run $22.7 million in the black, leaving a new net deficit projection of $77.9 million.

Senate Minority Leader Len Fasano, R-North Haven, and House Minority Leader Themis Klarides, R-Derby, were the first two legislators to call for nonpartisan staff to weigh in on the budget either during the summer or fall.

Fasano and Klarides intensified their call this week after The Mirror reported Monday that the Malloy administration had identified a $133 million revenue shortfall in a Sept. 6 memo to agency heads urging them to prepare frugal budget requests for the next fiscal year.

But on Sept. 20, the administration disclosed no significant revenue or spending problems in its official budget report to Lembo’s office.

“It is clear from the OFA report that the governor’s Office of Policy and Management’s assertions that the budget is balanced were incorrect, if not misleading,” Klarides said Thursday. “Voters and taxpayers have a right to know what is going on with their government prior to making decisions on who should be in charge. We need to acknowledge what is at the core of these conflicting reports.” 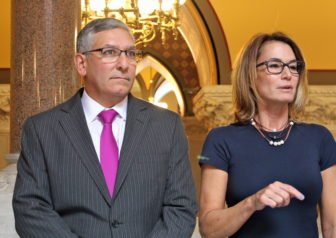 “Republicans have been warning about shortfalls in this budget before it was even passed, all while Democrat legislative leaders accused us of spreading ‘doom and gloom,'” Fasano said. “But facts are facts no matter who says them. And now we know that nonpartisan analysts, along with multiple rating agencies, agree.”

“Perhaps equally as troubling, is that this administration deliberately tried to hide the real numbers from the public,” Fasano added. “… And the only logical reason for withholding the true numbers would be to prevent the public from finding out just how bad our state finances are until after November. Many people in state government have some serious explaining to do.”

But the Malloy administration stood by its earlier forecast.

“We stand by our (Sept. 20) projections and will update them as the law requires in a week,” Malloy spokesman Chris McClure said. “While we might disagree with OFA on their assumptions, the simple reality is that we agree with them on more than 99 percent of an $18 billion (General Fund.) One thing we know for sure is that no one – Democrats, Republicans, or non-partisan staff – have ever accurately predicted revenue or expenditures within 1 percent this early in the fiscal year. In other words, everyone will keep projecting, and we’ll do what’s necessary to keep our budget in balance and end the year in the black.” 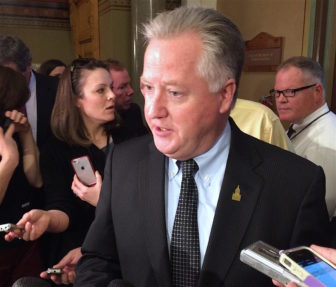 “Although revenues are expected to increase as the good news from Electric Boat, Pratt & Whitney, and Sikorsky turn into new, well-paying jobs, it is concerning that the lawsuit stemming from John Rowland’s illegal layoff of state workers has continued to harm Connecticut far into the future,” Sharkey said. “In the next legislative session it is imperative that the legislature remains focused on continuing to invest in job creation and economic growth, while keeping a close eye on spending.”

“At this point in the fiscal year, budget projections are always in flux; however, Connecticut continues to show signs of economic revitalization and growth in the precision manufacturing, aerospace and technology sectors,” Senate President Pro Tem Martin M. Looney, D-New Haven. “We will have a clearer picture of trends when consensus revenue figures are released in November.”

Lembo, who must issue a monthly budget projection, has a report due on Nov. 1.