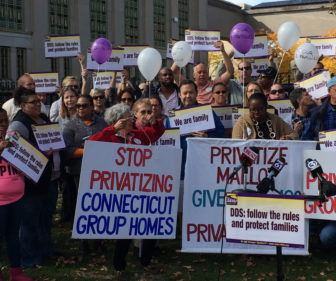 About 90 members of two unions and supporters of their lawsuit outside the courthouse in Hartford Thursday.

State employee unions plan to ask a judge to block the privatization of group homes for people with intellectual or developmental disabilities, saying the layoffs caused by those changes violate Connecticut law and will eventually be blocked by the state labor board.

If that happens, the unions say in their request for an injunction, clients would have their lives upended twice – first by having to go through a change in staff in state-run group homes where they have developed relationships with caregivers, and then again if the labor board orders the laid-off state employees to be reinstated.

If the unions are successful, they could block a major component of Gov. Dannel P. Malloy’s plan to shrink the state workforce — a plan that already is lagging behind schedule.

The unions, CSEA-SEIU Local 2001 and SEIU 1199, New England, represent nearly 500 workers who are expected to be laid off because of the Department of Developmental Services’ plans to privatize the services they provide. The workers include staff at state-run group homes and institutions, and those who provide job support, education, physical and speech therapy, health care and other services to people with intellectual or developmental disabilities.

Both unions filed a complaint with the state Board of Labor Relations earlier this week, alleging that DDS broke the law by failing to bargain with them over the decision to outsource the work.

The unions are expected to file the request for an injunction in Hartford Superior Court today. It asks for the court to stop DDS from laying off union members or contracting out their work until after the labor board complaint is resolved. 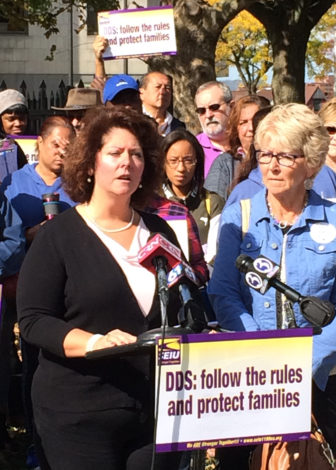 Jane Vasseur, of Enfield, whose adult brother lives in a group in Simsbury that is slated for privatization, addresses the union rally outside Superior Court in Hartford.

The Malloy administration plans to privatize 40 group homes, as well as services for people with intellectual or developmental disabilities – moves aimed at saving the state nearly $70 million per year by next fiscal year. Overall, the plan is expected to eliminate 605 state jobs.

In an August memo detailing the plans, budget director Benjamin Barnes wrote that the state was requesting that the private providers give hiring preferences, when possible, to state employees who lose their jobs because of the changes.

In a statement, Malloy Communications Director Kelly Donnelly added this:

“Let’s be clear about what’s happening here—in the midst of a changing economic reality, Connecticut state government needs to change as well in order to ensure that we maintain services for as many Connecticut residents as possible. In part, this means transitioning more of the 16,742 individuals with intellectual disabilities currently in the care of DDS to qualified community providers; the same longstanding partners providing high quality care who are already serving the vast majority of individuals.”

“Since 2009,” she continued, “the number of individuals served directly by DDS in state run CLAs has dropped from about 15 percent to less than 10 percent, meaning that more than 90 percent of individuals are being served by community providers. We deeply respect collective bargaining and are confident that our actions are not only warranted, but lawful and proper.”

Already, 92 percent of the 3,734 DDS clients who receive housing through the department live in facilities run by private agencies. Private providers say they can handle the work of publicly run facilities at far lower cost, and some families of people with intellectual disabilities have been pushing for the department to further privatize services, saying it could free up money to serve more people. There are close to 2,000 people waiting for residential services who have not received them because of a lack of funding. 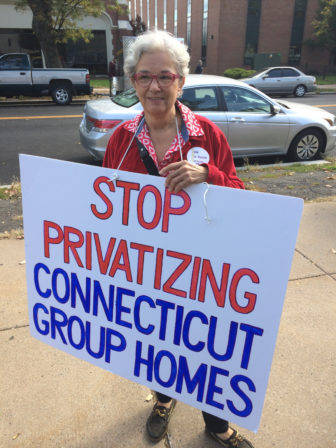 Lindsay Mathews, a parent of a DDS client displaced from a state-run group home in Hamden, joined Thursday’s rally.

But families of people living in the publicly run group homes have objected to the privatization plans. They say the nonprofits that run the private facilities don’t receive enough money from the state to provide comparable care, and that they face high employee turnover rates that can be especially problematic in jobs that involve close relationships with clients. They say they worry about the effect the changes could have on their loved ones.

Jane Vasseur of Enfield, whose brother, Billy, is a resident of a state group home in Simsbury slated for privatization, said the planned transition would be devastating.

Billy’s ability to communicate is very limited, Vaster said, adding that the state staff at his current home understand him as no one else does. “The people that know what’s bothering him are the people who work with him,” she said.

Juanita Dee of Berlin, a registered nurse with DDS, also warned administration officials not to underestimate the emotional bond between group home workers and staff. “These skills take time and experience and history to accomplish,” she said.

But the head of the trade organization that represents the private providers said the unions were taking an “obstructionist position on a plan that experience and research shows will only benefit the individuals in state care.”

“Change is difficult,” Gian-Carl Casa, president and CEO of the CT Community Nonprofit Alliance, said in a statement. “For the union to suggest that only state employees can deliver quality care is simply false, and ignores the fact that private providers already deliver care to the majority of individuals receiving state-supported services.”

“We are confident that private, community-based agencies can provide care that individuals now living in state facilities need and deserve,” he added.

Malloy and the General Assembly revised the 2016-17 budget last May, closing a nearly $1 billion projected deficit with no tax hikes, relying chiefly on spending cuts.

A key component of that plan involves nearly $325 million in cuts to salary accounts and related savings. That stems largely from a Malloy announcement back in April that state government would shed 2,500 state jobs by mid-June. The bulk, about 1,900 to 2,000 would come from layoffs, and the remainder from retirements in the final three months of the 2015-16 fiscal year.

The timing was important, the governor said, to ensure that the full savings from those cutbacks could be achieved in the 2016-17 fiscal year.

But with Connecticut now more than three months into its new budget, state government has laid off fewer than 1,100 workers.

Spring retirement applications offset a portion of that shortfall, running about 350 to 450 ahead of the administration’s projections, according to data from Comptroller Kevin P. Lembo’s office.

Still, Lembo expressed concerns in his last monthly budget projection, on Sept. 1, that state government might be hard pressed to achieve all of the savings targets built into the current budget.

The DDS layoffs being contested represent another crucial step Malloy wants Connecticut to take to shrink its workforce.

The administration has laid off 113 DDS workers to date. But another 492 departmental employees, involved primarily with the group homes slated for privatization, are scheduled to be laid off after Jan. 1.

The DDS employees in SEIU and CSEA have been working under a contract that expired on June 30.

That deal prohibited the state from laying off workers if the services they performed were being turned over to the private sector.

David Pickus, president of SEIU 1199, said that restriction still is in force, at least until a new contract is settled. The state has laid off health care workers before, and it has privatized health care services, he said. “But there’s never been layoffs caused by privatization. … It’s disappointing to us that the administration and DDS entered down this path in such a rushed … way.”