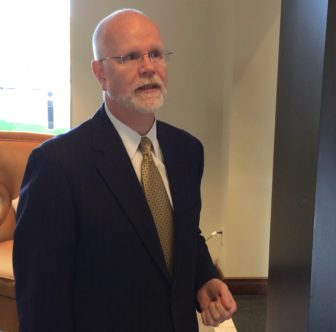 To say that State Comptroller Kevin P. Lembo has been walking a fine line over the past two weeks might be an understatement.

As legislative leaders and Gov. Dannel P. Malloy engage in a partisan battle over the health of Connecticut’s budget, the state’s chief fiscal watchdog insists he doesn’t want to stay out of the debate — just the political posturing.

Lembo, midway into his second term as comptroller and viewed as a 2018 gubernatorial prospect, has advocated better planning and greater candor about Connecticut’s budget challenges.

But he says the jury is still out on whether the latest budget battle — with Republican lawmakers on one side and Malloy and his fellow Democrats in the legislature on the other — is about either of those objectives.

“You have to remember this is the silly season,” Lembo told members of The Construction Institute — a nonprofit business advocacy group — during a forum Friday at the Sheraton Hartford South in Rocky Hill.

The comptroller took care in that talk neither to assign blame to either side nor exonerate anyone, something he said afterward was no accident.

“It really doesn’t matter,” he told The Mirror. “Someone’s always playing politics at this time of year.

“There are real problems we have to deal with. …We have to do it at a time and place when you are likely to have the most open and honest conversation. Otherwise nothing is going to happen.”

Over the past two weeks, almost every player in the budget debate has insisted an “open and honest conversation” about state finances is nowhere in sight.

(The governor reported a $6 million deficit on Oct. 20, about one week after nonpartisan analysts from the legislature said finances are $78 million in the red.)

Malloy’s term is not up for two years, but GOP legislators — who’ve argued that the budget has been out of balance from its inception in May — accused the governor of hiding red ink to shield Democratic legislators, who are up for re-election.

Republicans on the legislature’s budget-writing panels will hold a hearing on this idea on Wednesday.

Democratic legislators fired back that the time to reform fiscal reporting practices is in the spring, when the legislature is in session. Reaching for their most popular play this fall, Democratic legislators and Malloy’s office added that Republicans were proposing the change to detract attention from the controversial campaign of GOP presidential nominee Donald Trump.

“At some point, you can’t just sit on the sideline and snark,” Lembo told the forum in Rocky Hill, adding that there are “big chunks” of Connecticut’s long-range fiscal picture that “are problematic.”

State officials “are the bit player in a much larger economic story,” Lembo said, adding the officials have to find a way to stabilize state finances so economic growth can take off. “The goal has got to be for Connecticut state government to get itself the heck off the front page of the paper.”

Lembo said his role as Connecticut’s chief fiscal watchdog “is actually the part of the job that weighs heaviest on my shoulders,” but not so much that he is unwilling to bump heads with officials from either party.

In the latest debate, Lembo said, “I have never felt fettered in any way” by the current law that compels him to certify the governor’s budget numbers. But he said those who feel the comptroller must have the final say on Connecticut’s official financial statement — and was the case before 1991 — have merit to their argument.

Lembo conceded that the concept of compelling the comptroller by law to confirm the governor’s numbers is somewhat oxymoronic. Certification implies an independent evaluation with the freedom to reach any conclusion.

“It makes for a better mousetrap whenever you have independent verification,” he said. “That kind of thinking is behind everything we do in this office.”

Lembo also said he understands why some would be confused by the contradictory numbers reported by Malloy last month — the comptroller sent the administration a letter expressing that point. Nor is he surprised that some wonder why Republican legislators want to hold a hearing on budget issues less than two weeks before Election Day.

But the comptroller said what he’s really interested in is seeing evidence of a commitment to stabilize state finances over the long-term.

Can that process begin during the “silly season,” as he calls it?

“I don’t know,” he said. “I’m ready to have a real conversation about this if we’re really working toward something.”