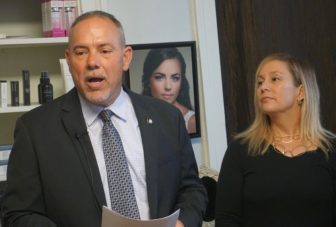 House Majority Leader Joe Aresimowicz, D-Berlin, told reporters Thursday morning that someone should lose their job over the digital attack ad a union political action committee placed against Dr. William Petit, a home-invasion survivor. By nightfall, someone did.

Paul Filson, the treasurer of the PAC, resigned as the executive director of the state council of the Service Employees International Union, a post that made him the union’s political director and a regular presence at the State Capitol, lobbying leaders like Aresimowicz on SEIU’s legislative agenda.

An identical ad used against Petit and several other Republican legislative candidates attempted to tie them to Donald J. Trump and his “attacks on women and families.” When directed against Petit, whose wife and two daughters were killed during a home invasion in 2007, they provoked outrage as an insensitive libel of the victim of an iconic crime.

In a statement, SEIU disavowed prior knowledge of the ad its constituent unions funded through Labor United of Connecticut, citing the rules on independent expenditures. With its legislative allies embarrassed, angry and calling for a dismissal, SEIU placed all blame on Filson and the PAC’s creative consultant.

“Because of regulations inherent to independent expenditures we, as an organization, are not permitted to know the content that is distributed on behalf of those political efforts.  Campaign finance laws are explicitly clear that there cannot be any coordination between our organization and that of Labor United for Connecticut. Therefore, our organizations were not in a position to vet, approve or even be made aware of the digital ad that ran in Dr. Petit’s district.

“However, once the ad became public yesterday it was clear it was not reflective of our locals’ or SEIU’s standard and it should have never taken place. We offer our sincere apology to Dr. Petit and feel strongly this ad should have never run in his district under any circumstances. It is extremely regrettable that such poor judgment was exhibited by those tasked with running the independent expenditure, and we have taken action to remove those responsible from the campaign.”

DKC, a public-relations and advertising firm in New York City that prepared the ad, was fired, said Jennifer Schneider, the communication director of SEIU 1199, New England.

“I think the bottom line was the ad wasn’t in keeping with the standards SEIU has. External pressure didn’t play into it,” Schneider said.

Aresimowicz, who is set to become the speaker of the House in January if the Democrats retain their majority, denounced the ad in particular and independent-expenditure groups in general while campaigning with Democratic candidates in Cheshire, the community where Petit’s wife and daughters were killed.

“What was said about Dr. Petit was absolutely disgusting,” said Liz Linehan, a Democrat running in Cheshire for an open House seat. “And I don’t condone that at all. And I think an apology really needs to be forthcoming.”

Petit has since moved to Plainville, where he grew up, has remarried and is running against Rep. Betty Boukus, D-Plainville. He and House Minority Leader Themis Klarides, D-Derby, held a press conference outside his home Wednesday to denounce Labor United. 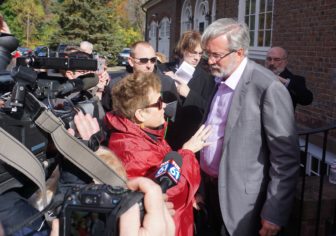 Betty Boukus and William Petit outside his home.

“We should find a way to make it against the law,” he said. “I understand Citizens United and what that ruling did, but when the people of the very district that we’re representing here, when the people of the district that I represent in Berlin lose their voice because large corporations, labor unions, anybody right down the line can dump money into this state and say and do things that were inconsistent with what our constituents want, we should not allow it – under any circumstances.”

He said he was reacting both to the Labor United ad and a CT Mirror story about the prospect of negative ads placed against Democrats by Grow Connecticut, a local Super PAC funded by a Washington group that draws contributions from major corporate and conservative donors.

Aresimowicz questioned how effective the negative ads would be.

House Republicans, meanwhile, intended to press Friday for Democrats to denounce the Labor United ad wherever it is used, keeping Democrats on the defensive.

“Someone finally realized that what these independent operatives of the Democratic Party did crossed the lines, and that is good,” Klarides said. “But we have no assurances that this type of offensive, outrageous disregard for the truth to abuse Republicans, women or men, for the sake of cheap political advantages won’t continue. It cannot be tolerated.”