In a report filed Wednesday night with the State Elections Enforcement Commission, the group disclosed making $300,250 in independent expenditures, half to produce and air a television ad that attacks all Democratic legislators as “a rubber stamp” for Gov. Dannel P. Malloy and the rest on digital ads in 13 House and Senate races.

Grow Connecticut, a PAC managed by a former official of the state GOP, reported a single contribution of $350,000 from the Republican State Leadership Committee, a Washington, D.C.-based 527 group whose IRS filings list contributions of $500,000 from Adelson, $200,300 from Wal-Mart, $216,590 from Koch Industries – and $28,535 from a trade group run by former U.S. Sen. Chris Dodd, a Connecticut Democrat.

“I have a longstanding partnership with the Republican State Leadership Committee. This is the third cycle working together,” said Liz Kurantowicz, the treasurer and sole manager of Grow Connecticut, a major funder of ads in the 2014 race for governor.

In 2012, another Super PAC managed by Kurantowicz, Voters for Good Government, also targeted Democrats for defeat with backing from the Republican State Leadership Committee.

Foley can be seen in the background of the new Grow Connecticut television commercial attacking the Democratic majority in the General Assembly by linking them to Malloy, an unpopular governor who is not on the ballot this year. The digital ads are in production.

The spending on the 13 legislative races was described as an even mix of ads supporting Republicans and opposing their Democratic opponents.

Logan is one of the four Republican candidates trying to win Democratic Senate seats that the Connecticut Business and Industry Association is supporting with more than $400,000 in independent expenditures, all for positive ads. The money also is backing two Democrats and nine Republicans in House races.

In the Senate, Republicans need a net gain of four seats to turn a 21-15 Democratic majority into a 19-17 GOP advantage. In the 151-seat House, the GOP needs a net gain of 12 seats for a majority.

The 10 House races targeted by Grow Connecticut include two districts with the closest races in 2014. It is opposing Rep. Michelle Cook, D-Torrington, who won re-election by just 52 votes, and supporting Rep. Aundre Bumgardner, R-New London, a freshman who won by 39 votes.

The other Grow Connecticut ads are directed at races for open House seats.

It was unclear if Grow Connecticut will target other races with its $59,610 in available cash. 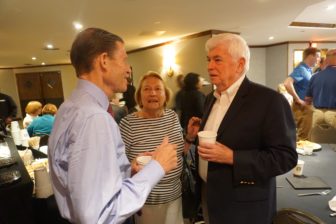 Chris Dodd chatting with old friends Richard Blumenthal and Barbara Kennelly at the Democratic National Convention In July, before his MPAA contributed $28,535 to a GOP PAC supporting a campaign to defeat Connecticut Democrats.

There are a few degrees of separation, but some of the funds for Grow Connecticut’s efforts to topple Democrats can be connected to an unlikely source: Dodd, an icon of Democratic politics.

Dodd is now the chairman and chief executive of the Motion Picture Association of America, a trade group that contributed a total of $28,535 to the Republican State Leadership Committee, known in political circles as the RSLC.

The $350,000 contribution to Grow Connecticut was a small portion of the $6.77 million spent nationally by the RSLC in the third quarter of 2016 and the $14.77 million spent in the the first nine months of the year.

Some of its donors play both sides of the aisle: Its Connecticut contributions included $50,400 from Boehringer Ingelheim, $30,000 from Purdue Pharma and $22,824 from Diageo North America, corporations that have donated to the Democratic Governors Association, now run by Malloy.

Other Connecticut contributions included $5,000 from Jeffrey Hoffman of the Hoffman Auto Group and $5,000 from Robert Patricelli, the chairman and chief executive of Women’s Health USA.

Two PACs controlled by the Republican leaders of the General Assembly each contributed $200.

Grow Connecticut was created in 2013 by the same campaign-finance law firm that represented Foley’s campaign for governor and Voters for Good Government.

Grow Connecticut and Voters for Good Government are “527s,” political organizations formed under Section 527 of the Internal Revenue Code to make independent expenditures. They are permitted to raise and spend unlimited amounts of money to influence elections — as long as they do not coordinate with the candidates they are trying to elect.

In 2012, Voters for Good Government spent more than $300,000 on state legislative races, targeting Cassano, among others, for defeat. Grow Connecticut has no connection to Foley, Kurantowicz said.

“I am the only legally responsible person for this organization,” she said. “It is not affiliated with any candidate or former candidate.”