Keena Hicks knew her son was on a path to prison when he was just 12 years old – and there was little she could do about it.

The state’s child welfare agency declined her plea to provide services to her out-of-control son until he was caught breaking the law, and the programs provided by a network of private providers failed to alter his trajectory.

“It doesn’t matter what is offered, he has to want to change,” the Hartford mother recently told a room full of program providers, attorneys who represent or prosecute youth and state employees who work in Connecticut’s juvenile justice system.

Hicks’s son would go on to spend most of his teen years rotating between the state’s controversial jail for juveniles in Middletown and his home in Hartford.

“He doesn’t want to be locked up – but he doesn’t need to be home either,” Hicks said, noting that when he’s locked up, “He’s always good there; it’s when he leaves that he gets into trouble. It’s a cycle.”

Now 17 years old, her son has graduated to adult prison after getting caught stealing cars four times over the last 12 months.

It’s a path that’s too common for state officials to accept, and they are working to overhaul the system and close the Connecticut Juvenile Training School, where eight out of 10 youths who leave are arrested for a new crime within 24 months.

The new strategy, released by the Department of Children and Families (DCF) two weeks ago, aims to keep youths – unless they are deemed a risk to the public – out of CJTS and in a less-restrictive group home or with their families, with appropriate support services.

The number of boys being sent to the state’s juvenile jail reached a record high of 156 in 2014 after placements in community group homes declined sharply. That meant that 40 percent of youths committed to DCF for crimes not serious enough to land them in the adult criminal justice system were incarcerated at the training school. Last week, the number of youths living at CJTS was at a near-record low of 42 – just 17 percent of youths in DCF custody for breaking the law.

This shift can be attributed to both a significant drop in the number of youths courts are committing to DCF and the agency’s new priorities about where to send those who are sent their way.

“We are proud of the progress we have made in increasing the number of youth who are served in their homes – but we know there is more work to do,” said Gov. Dannel P. Malloy in a release about the DCF-hosted conference last week where Hicks and others spoke. “Whether a child is at home, or returning from an out-of-home setting, it is essential to bring their families, schools, and communities together to give them the best chance to succeed in the future.”

“We are very invested and committed to youth living in the community and with their families and not in institutions,” Michael Williams, the deputy commissioner of DCF, said during an interview. “We are trying to signal an enhanced reform to serving kids in communities. We have to make sure kids end up with the programs they need to stay out of trouble.”

The determination to rely more heavily on families followed a number of developments:

DCF made a series of changes in recent months to decrease the number of youth locked up. The commissioner now must sign off before any youth is sent back to CJTS for a technical violation. Youths are also being released early if they show measurable improvement while at the facility, and a new tool is being used to better assess whether youths are a danger to the public.

And two weeks ago the agency laid out its proposal to increase services for youth while living at home. Those services include increased mental health and substance abuse treatment as well as educational programs to help make youths employable.

However, while DCF is proposing to increase spending by $7.2 million to help those in its care who already are enmeshed in the juvenile justice system, the Connecticut Judicial Branch has had to drastically cut services that aim to prevent youth from being committed to DCF in the first place.

At last week’s conference, both the value of such programs and the shortage of currently available services was on full display.

“It’s tough, we can’t service everybody. It’s tough,” said Diego Lopez of Compass Peace Builders, an organization that mentors youth in an effort to help them avoid prison. “Kids think we are their parents. They confide in us. We all they got.”

Lopez and several others said that what so many children need most is a positive adult figure to lean on and trust.

“Once that connection is there, I expect change,” said Diego, who got involved in a gang and the criminal justice himself while growing up in Hartford. “It’s just love, man. They need love. These kids can sense someone who just comes in their home and just writes something down – they know.”

Angel Cotto is one of those who credits people like Diego with changing his trajectory. Dealing with a mom who was in jail, an alcoholic father and a number of less-than-ideal foster homes, Cotto ran away, was homeless for awhile, and began to act out. Eventually he was sent to juvenile jail.

Then he was introduced to Peace Builders. 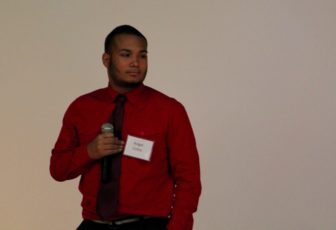 “I was feeling the aftereffects of what happened to me. I spent three years going through hell,” he said during an interview. “I just really needed someone to talk to. I couldn’t really balance everything in my life.”

Cotto hasn’t been in trouble since, and he’s slated to graduate high school in the spring and attend college next fall.

“Peace builders definitely came in at the right time,” he said.

Not everyone turns their life around on the first intervention, however.

“I used to be bad as hell. I had to make a decision for myself and for my daughter,” said Tyquann Wright, who earned his high school diploma while confined at CJTS.

He has not been in trouble since.

For him, social workers from Catholic Charities are one of the main reasons he’s stayed on track.

“They always have my back. But they always made it clear if I want to help myself, I have to do it,” Wright told the crowd.

Jacqueline Baez, center, of Catholic Charities, talks with Tyquann Wright and Brian Delvalle, whom she helped defy statistics and not return to CJTS.

But programs are lacking to keep youth out of trouble.

“When the youth get out of school, that’s when they get into trouble. When I had free time, that’s when I messed up,” said Brian Delvalle, a senior in West Hartford. “We need more programs.”

Parents and grandparents also shared stories during the day-long event about how their children weren’t able to get services.

One grandparent said her grandson kept getting into trouble while a juvenile, and was only identified recently as having schizophrenia when he got into trouble in the adult correction system.

Another parent said services were dropped after her son was released from a group home.

“He was lost,” said Lois Britton of West Haven. “A little more counseling would have helped him on the outside. By the grace of God, we as a family were able to pull him out of that cycle. But not all children have that.”

Last month, the state, for the first time, released recidivism rates for youth who leave CJTS, a figure that has never been tracked across the various state agencies that oversee the juvenile justice system.

Of the 48 youth who left CJTS during the first six months of 2014, 40 were rearrested within two years of their release. Between 2011 and 2014, rearrest rates increased from 75 percent to 83 percent.

At Manson Youth Institute, the prison where Hicks’s son now is incarcerated and which houses inmates convicted in adult court of crimes they committed before they turned 18, 65 percent of those released during the first six months of 2014 were rearrested within 24 months.

For Hicks, she’s not optimistic her son will stay out of prison.

“It’s him not wanting to change,” she said. “It’s definitely a cycle.”