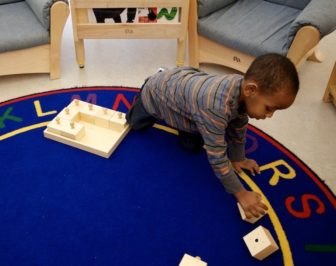 A bailout to close a major shortfall in a program that subsidizes child care so low-income parents can work is unlikely, the governor’s budget director said Friday.

“I don’t have any money to bail them out,” Benjamin Barnes, the secretary of the governor’s Office of Policy and Management, said during an interview.

Earlier this year the state suspended new enrollment by tightening eligibility requirements for the popular Care4Kids program, but the move did not reduce costs enough, and an $8.7 million shortfall lingers – a 15 percent structural deficit.

The state is now considering closing the remaining shortfall by further changing eligibility requirements to eliminate daycare help for about 300 families now in the program each month, a decrease of about 2,000 families over the year.

Those changes aim to slow churn in the program – and ease the resulting uncertainty for families – by allowing families who become ineligible for the subsidies because of rising incomes to no longer lose them immediately, but instead have them phased out over three months. In addition, continued eligibility for the program is now re-evaluated every 12 months instead of every eight, allowing others who become ineligible to remain on the program for an additional four months.

Legislators, however, are still trying to find a bailout.

“I am afraid that what we are doing is cutting jobs,” said Sen. Beth Bye, D-West Hartford, the co-chairwoman of the legislature’s powerful Appropriations Committee. “Can’t we find a one-time expenditure, either through bonding or by moving [federal welfare benefits] for this. I think that would be the best fix.”

The federal government gives the state about $270 million each year to provide job training, housing subsidies, cash benefits and other assistance to struggling families. That grant – known as the Temporary Aid for Needy Families, or TANF –  however, is not an option for bailing out the daycare program this year, the governor’s budget office maintains.

“It’s not going to happen this year,” said OPM spokesman Chris McClure, who pointed out that all the money the state is expecting to receive from that grant has been promised to other programs. “There is not a bucket of dollars sitting around that could go toward Care4Kids.”

But Catherine Abercrombie, D-Meriden, the co-chair of the legislature’s Human Services Committee, thinks money should be redirected. “I think there is a better way to use our TANF dollars. I think that needs to be on the table,” she said.

Barnes said his office probably will be announcing how it intends to close the shortfall in the next 10 days, and any changes would begin taking place in January.

Regardless, he knows the impact it could have.

“Clearly, pushing some low-income families and taking away their access to affordable childcare is an enormous kick in the chest to those families and would cause disruption. They would have to change work schedules, change day care arrangements, potentially lose employment and there would be adverse consequences for them,” said Barnes.

Correction: The story has been updated to reflect updated projections of how many families would lose their child care subsidy.