Child care subsidies limited to existing recipients or those on welfare 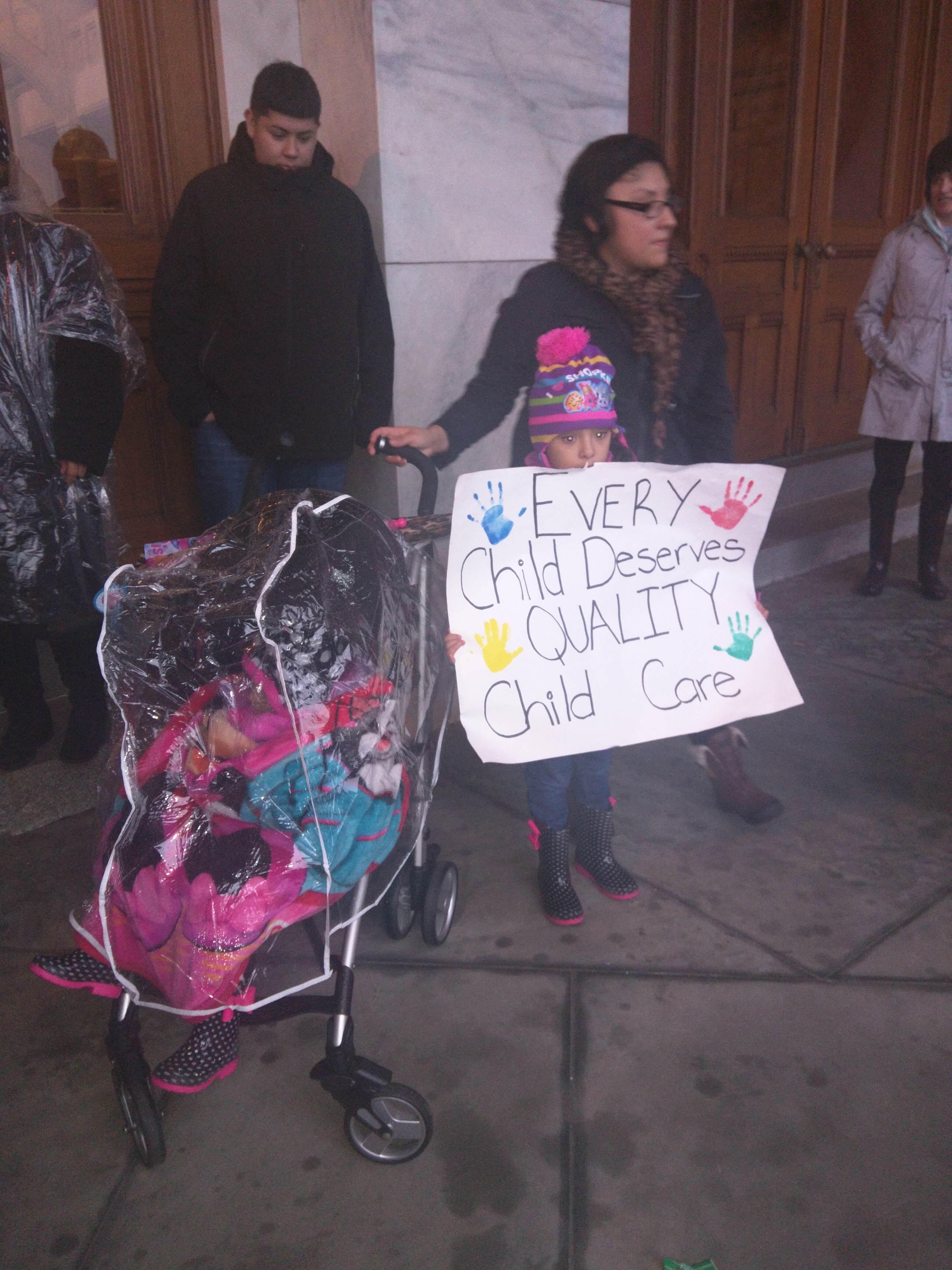 Six year old Janelyn Marquez of New Haven holds up a sign during a rally at the state Capitol about changes to the state’s child care subsidy program.

The changes, which will go into affect Dec. 31, mean the state will have to turn down an estimated 1,800 families with 2,700 children over the next six months who would have qualified for help covering the cost of day care, preschool or after-school programs.

Families who currently receive a subsidy will not be impacted by Tuesday’s announcement and will continue to receive help.

“The Office of Early Childhood takes the decision to change eligibility requirements to the Care4Kids program very seriously, and we realize the impact this will have on many working families,” Linda Goodman, the office’s acting commissioner said in a statement. “Our long-term endeavor is to provide high-quality early childhood opportunities to as many Connecticut children as we can, and we will continue to work with our local, state and federal partners to deliver on this goal.”

The change is expected to close $1.5 million of a $6.1 million deficit in the Care4Kids subsidy program. The governor’s budget office plans to close $2 million of the remainder by using unspent money allocated in the state budget for high-quality preschool spots.

That leaves a $2.6 million shortfall, an amount the governor’s budget office is comfortable leaving for now and monitoring.

“If that deficit grows, we will have to make other changes,” said Chris McClure, spokesman for the governor’s Office of Policy and Management. “The changes to Care4Kids’ eligibility were made only after a careful and diligent review of all of the available and realistic options. OEC and OPM are continuing to work to close the deficiency without destabilizing families, and additional changes may be required as the year progresses, but every step we make today makes that less likely.”

Tuesday’s announcement was a relief for parents who already receive the subsidy and worried that the state would kick off them off the program to close the shortfall.

“It’s clear that the state wanted to protect the most vulnerable,” Freelove Queen, who runs a home day care in New Haven, told a rally outside the state Capitol Tuesday. She called the announcement that new enrollment would be stalled for many poor families while protecting existing recipients “just a short-term solution.”

This is the second time in recent months that the state has had to scale back who can enroll for child care subsidies, which range from $38 to $320 weekly per child, depending on the type and location of the program. Those enrolled all make under 50 percent of the state’s median income. For a single mom with two children, that’s $44,000. 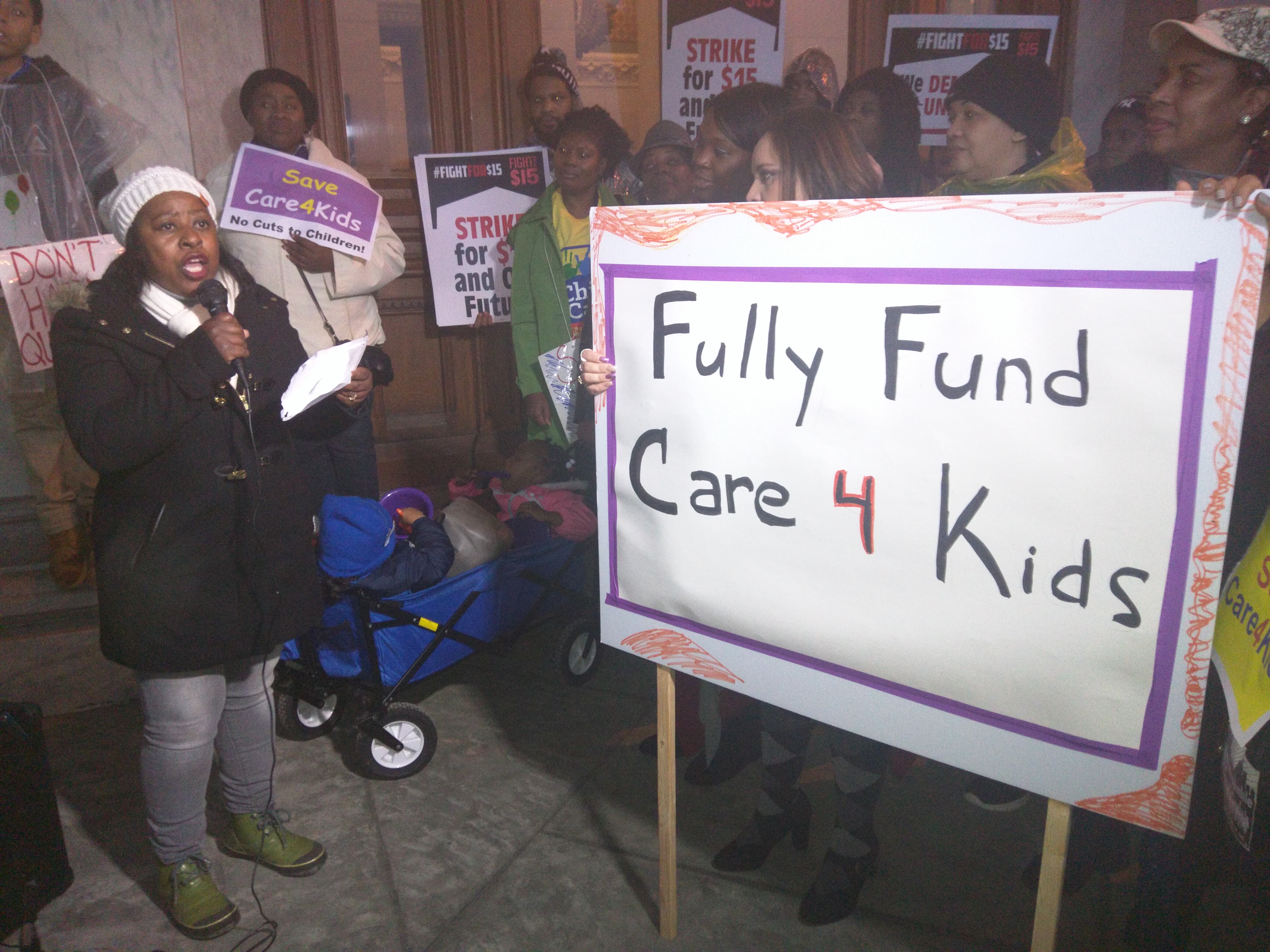 Freelove Queen of New Haven during a rally at the state Capitol about changes to the state’s child care subsidy program.

On Tuesday, the state announced it would stop enrolling families who had received Temporary Aid for Needy Families, often referred to as welfare benefits, within the last five years but no longer do.

In August, the state stopped enrolling those families who had not received welfare benefits in the last five years. About 700 families (1,050 children) each month were joining the Care4Kids subsidy program before this change.

Merrill Gay, the executive director of the Early Childcare Alliance, which lobbies on behalf of providers, said for those already on the program Tuesday’s announcement “is a sigh of relief”, but for those who will need help in the coming months, the lack of aid will be devastating.

“You will scramble to find whatever arrangement you can afford… And when those type of arrangements fall apart, then you have someone calling out [of work] because they can’t find child care,” he said.

The state and federal government together currently spend $122 million each year for child care for about 20,000 Connecticut children. 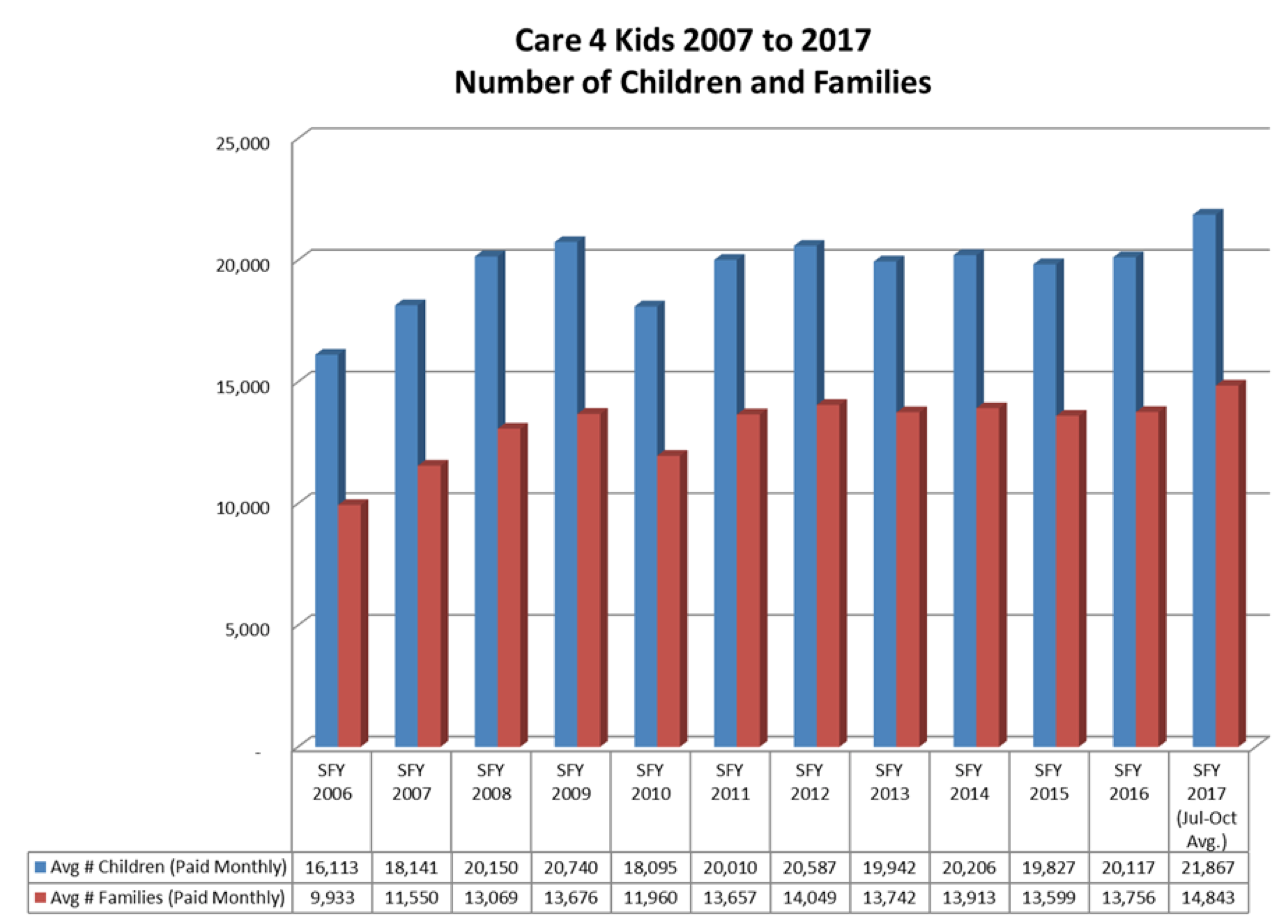 Program costs are expected to rise drastically next year because of changes in federal law that are not accompanied by increased federal funding. Under the new federal rules, families who lose their full-time jobs or whose income rises too much will no longer immediately lose their subsidies but will be allowed to stay in the program for three months after they no longer qualify.

While the program largely has been closed to new enrollees, the number of children in the program actually has increased since last year because of the retention changes.