CT lawmakers torn between funds for subs and waiver for Mattis

Washington – A stopgap measure to fund the federal government would allow work to continue on a new Connecticut-built ballistic missile submarine while also expediting the controversial nomination of retired  Gen. James N. Mattis as the next secretary of defense. 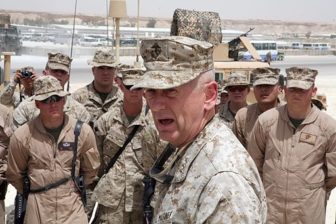 That spending bill, which must be approved by Friday to avoid a shutdown of the federal government, poses a tough choice for Connecticut’s lawmakers torn between huge local military contracts and concerns over Mattis’ appointment.

For the most part, the $1.07  trillion “continuing resolution” would hold funding of the federal government at fiscal year 2016 levels. But the Pentagon’s budget has been boosted by $8 billion.

The resolution also contains other provisions aimed at winning Democratic support, including $170 million in aid to rebuild water systems in Flint, Mich., and $500 million for states to respond to the opioid abuse crisis.

The bill would fund the federal government through April 28 of next year, giving then-President Donald Trump three months to work with Congress to draft a long-term spending plan.

“This legislation is just a Band Aid, but a critical one. It will give the next Congress the time to complete the annual appropriations process; and in the meantime, take care of immediate national funding needs,” said House Appropriations Chairman Hal Rogers, R-Ky.

The bill takes care of a big worry for the Navy. Ordinarily, a continuing resolution does not allow for new federal projects to begin. That would cast in doubt whether work could be initiated at Electric Boat in Groton on the new Columbia-class ballistic missile submarine, also known as the Ohio-class replacement sub.

But Republican leaders, lobbied by members of Connecticut’s congressional delegation, allowed an “anomaly” that would begin funding work for the sub, the most expensive one ever acquired by the Navy.

An aerial view of attack submarines USS Virginia, bottom, and USS Connecticut at the Groton submarine base.

“This is great news for eastern Connecticut and great news for the U.S. Navy,” said Rep. Joe Courtney, D-2nd District.  “The Columbia­–class program would face critical delays and ballooning costs without this needed adjustment to the CR.”

The measure would also continue funding the two-a-year pace of construction of Virginia-class subs and keep production of F-135 engines, built by East Hartford-based Pratt & Whitney on track.

It also contains a provision sought by Sen. Richard Blumenthal, D-Conn., and other lawmakers to allow money to be used for Army Apache and Sikorsky-made Black Hawk helicopters.

For the past several years, Congress has forced the government to start the fiscal year under a stopgap bill that required the Pentagon to award new contracts during the second quarter of the fiscal year or later to avoid potential problems. This bill would help acquisition of Apaches and Black Hawks to move more smoothly.

The House is expected to vote on  the package on Thursday and the Senate on Friday.

But the provision concerning Mattis is raising controversy – and resistance from Democrats.

Mattis needs an act of Congress to make him eligible to lead the Pentagon because under law the defense secretary has to be a civilian for at least seven years before taking office. Mattis retired from the Marine Corps in 2013.

The continuing resolution contains language that specifically exempts the next Secretary of Defense confirmed by the Senate from that law.

Sen. Chris Murphy, D-Conn., is among the Democrats who object to the provision.

“I think it’s a big mistake to put some rider for a Trump nominee in a year-end spending bill,” he said.

“It is something that should not be done… Republicans haven’t shown any interest in expediting nominees under Obama. I’m not sure why they would do it now.”

Sen. Charles Schumer, D-N.Y., the Senate’s incoming minority leader, said the nomination “should not be short-shrifted through a CR.”

Sen. Kirsten Gillibrand, D-N.Y., said the waiver for Mattis is the reason she will oppose the bill.

In the House of Representatives, Minority Leader Nancy Pelosi led opposition to the waiver.

“Civilian leadership of the military has been a cornerstone of our democracy since the founders, and for good reason,” she said in a statement released Thursday.  “In the whole history of the Department of Defense, the only Defense secretary ever given a waiver was then-secretary of State, General George Marshall — who was provided an individual waiver in a stand-alone bill approved by the Congress.”

Before the continuing resolution was released late Tuesday, Courtney said he hadn’t made up his mind whether to support it and wanted to scrutinize it before making up his mind.

“It has great stuff for Connecticut,” he said.