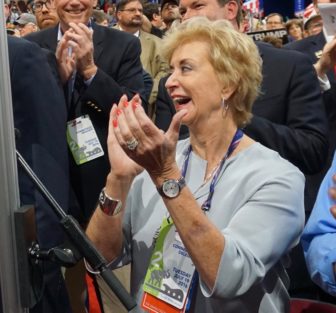 “My America First agenda is going to bring back our jobs and roll back the burdensome regulations that are hurting our middle class workers and small businesses. To help push our agenda forward, I am pleased to nominate Linda McMahon as the head of the Small Business Administration,” Trump said in a statement released Wednesday.

McMahon, 68, of Greenwich met with Trump at Trump Tower in New York City on Nov. 30 to talk about the SBA, which was elevated to cabinet rank at the end of 2008 by President Obama.

Asked if she had a job offer then, she replied: “That remains to be seen. Stay tuned.”

“Our small businesses are the largest source of job creation in our country,” McMahon said Wednesday. “I am honored to join the incredibly impressive economic team that President-elect Trump has assembled to ensure that we promote our country’s small businesses and help them grow and thrive.”

The SBA is a much lower-profile agency than other cabinet-level departments. But it administers more than $1 billion in a number of loan guarantee programs that help small businesses with poor credit or other problems obtain financing. It has special programs for women-owned and minority-owned businesses.

It has been a target of conservative Republicans, who tried to eliminate the agency during the Clinton administration and often tried to cut its budget. The current SBA administrator is Maria Contreras-Sweet.

McMahon and her husband, Vince, contributed $5 million to Trump’s charitable foundation and have known Trump for years.

Linda  McMahon donated about $6 billion to a political action committee that supported Trumps’ candidacy for the White House. But she said she was not interested in an ambassadorial position, a job usually offered large donors.

McMahon was also a  member of the Connecticut delegation to the Republican National Committee in Cleveland and stood next to the state chairman, J.R. Romano, as he cast all 28 votes for Trump. The president-elect won the Connecticut primary in a landslide, but lost the state to Hillary Clinton in the general election.

Despite her support for Trump, McMahon also criticized the president-elect during the GOP primary campaign, saying his comments about women were “deplorable.”

She spent $50 million on each on two losing U.S. Senate races against Richard Blumenthal in 2010 and Chris Murphy in 2012.

“Linda has a tremendous background and is widely recognized as one of the country’s top female executives advising businesses around the globe,” Trump said. “She helped grow WWE from a modest 13-person operation to a publicly traded global enterprise with more than 800 employees in offices worldwide. Linda is going to be a phenomenal leader and champion for small businesses and unleash America’s entrepreneurial spirit all across the country.”

“My husband and I built our business from scratch, building it to a publicly traded global enterprise with more than 800 employees, ” McMahon said Wednesday.”I know what it is like to take a risk on an idea, manage cash flow, navigate regulations and tax laws, and create jobs. Since stepping down as CEO of WWE in 2009, I have worked to help more people have the opportunity to pursue the American Dream. And for the past two years, I have educated and promoted women in entrepreneurship as CEO of a startup, Women’s Leadership LIVE.”

The Senate Small Business Committee will hold her confirmation hearing.

On Wednesday Trump also named retired four-star Marine Gen. John F. Kelly, whose son was killed in combat in Afghanistan, as his choice for secretary of Homeland Security.