With an eye on legislature, Bronin makes pitch to suburbs 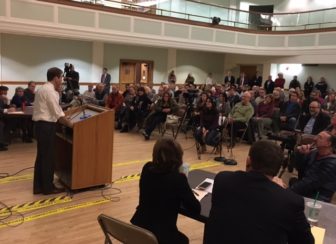 West Hartford — It wasn’t necessarily the way Hartford Mayor Luke Bronin wanted to start a conversation with the suburbs about what it would mean to the region if the capital city goes broke — the same issue Bronin desperately wants the General Assembly to address when the 2017 session begins next month.

But the Metropolitan District Commission’s unexpected levy on its member communities for a reserve fund in case Hartford cannot pay its bills to the water-and-sewer authority suddenly is getting Bronin invitations to the suburbs to talk about the city’s challenges. The assessments are the first concrete impact of Hartford looming insolvency on the region.

Bronin, 37, who took office on New Year’s Day, inheriting an immediate operating deficit of $48 million and exploding debt payments, will be in Rocky Hill next Monday. On Tuesday, he answered questions for two hours from residents of this suburb, which the MDC hit with an assessment of more than $3.3 million, later lowered to $1.7 million.

He asked them for nothing. He proposed no regional cost- or revenue-sharing. But he made clear that Hartford, by far the poorest city in Connecticut and one of the poorest in the U.S., no longer can pay its debts, not with 52 percent of its land devoted to state offices, hospitals, universities, museums, parks and other tax-exempt uses.

“It’s just not a system that is built to work,” Bronin said.

With the state facing a projected budget shortfall of more than $1 billion in the coming fiscal year, Bronin is trying to lay the groundwork for asking the legislature to increase state reimbursements for tax-exempt property, at least for financially distressed municipalities.

Hartford stands alone from the other cities on nearly every key metric of urban distress. It’s not just that the capital city is the poorest in Connecticut — it’s how much poorer it is, even when compared to Bridgeport and New Haven.

Bronin addressed the inherited shortfall of $48 million by cutting $20 million in expenses and using the city’s reserve. But the previous administration’s buying of time by restructuring debt has left Bronin with the prospect of ever-increasing shortfalls unless the legislature does a better job of funding the formula for PILOT — payments in lieu of taxes.

A $50 million shortfall next year jumps to $70 million and keeps rising, he said.

“The debt services goes higher and higher,” he said.

He was applauded when he told the audience he was there to explain “why it’s not in anyone’s interest to see the capital city fail.”

One resident, George Kennedy, asked why the city doesn’t seek bankruptcy protection to restructure its debts.

“What would be wrong with going into bankruptcy,” Kennedy asked. “President Trump doesn’t have any problem with it?”

Bronin laughed and noted that Trump is not a municipality, and a municipality cannot shed its responsibilities as easily as an over-leveraged real-estate developer.

He quickly turned serious and made the case against municipal bankruptcy, something never attempted by a capital city. Bankruptcy would allow the city to reopen is labor contracts, not guarantee lower operating costs.

“One thing you can bet is creditors to fight like hell to keep as much money as possible, and what that means is you’re probably looking at years of litigation and a very uncertain process,” Bronin said.

Bronin said bankruptcy would be a blow to a region and state that has not entirely recovered from the recession of 2008.

“You can bet we’d be on the front page of every newspaper across the country,” Bronin said. “As a state I think we’re still dealing with the psychological blow of GE moving to Boston. Our capital city in bankruptcy would make GE moving to Boston look like nothing.”

OZ Griebel, the president of the MetroHartford Alliance, the region’s largest business association, said business leaders have varying opinions as to whether bankruptcy is advisable.

“There is not a consensus right now,” Griebel said. “The most important thing I can say about the private sector right now is that there is great support of Luke and his approach to this — the willingness to engage in dialogue, the fact he is going out to West Hartford.”

Rep. Matt Ritter, D-Hartford, who is the House majority leader-elect, said the state’s budget challenges mean that Hartford’s success lies with the ability of Bronin and the city’s legislative delegation to build coalitions.

“If we go to the State Capitol and say ‘It’s Hartford and only Hartford that needs help, please help us.’ I think it’s going to be difficult,” Ritter said.

In the view of some legislators, Bronin overreached in the spring when he asked the General Assembly for unprecedented powers: Under the auspices of a new Hartford Financial Sustainability Commission, he could renegotiate labor deals and impose taxes on tax-exempt institutions.

Hartford Hospital, Trinity College, the University of Hartford and major non-profits objected to the new taxing authority, while labor leaders complained that Bronin was acting precipitously in seeking to free the city of its labor commitments. The City Council and his own legislative delegation declined to back him.

Ritter said Bronin, small groups of City Council members and legislators have been meeting at his house in the West End, talking about a joint lobbying strategy for 2017. He predicted everyone will be working together in the next session.

“I think Luke’s been very open and honest. It’s a problem we can’t ignore,” Ritter said. “If we ignore it, ultimately there is a cost to everyone in the state of Connecticut.”