School bus outside the state Capitol

Gov. Dannel P. Malloy will push to scale back spending on local school construction projects in the next state budget because Connecticut is on pace to exceed its credit card limit.

State bonding is projected by the governor’s Office of Policy and Management to exceed its limit by $316 million in the fiscal year that begins July 1 and $481 million the following year.

“I expect legislation to be presented in order to assist the state in controlling the costs of our school construction program,” Ben Barnes, Malloy‘s budget chief, wrote Thursday to legislative leaders on the Appropriations; Education; and Finance, Revenue and Bonding committees.

While the statutory bonding limit will tighten the funding available to build or renovate local schools, it also is likely to slow construction at public colleges and for state buildings and other projects in legislators’ districts. Facing a similar debt limit for the current fiscal year, legislators last spring canceled or delayed $1 billion in various projects and programs.

Instead of canceling school projects ad hoc again this year, the Democratic governor plans to push for changes in the policies governing how local school construction projects receive state aid.

A Hartford Superior Court judge last fall decried what he called a “free-for-all” where every school district that applies for funding receives it and legislators often amend rules to increase how much a project in their district qualifies for.

The judge, Thomas Moukawsher, who was presiding over a trial on the constitutional adequacy of school funding in Connecticut, also noted that a “building boom” had taken place despite declining student enrollment and widely held expert opinion that physical facilities are among the least important factors in learning. 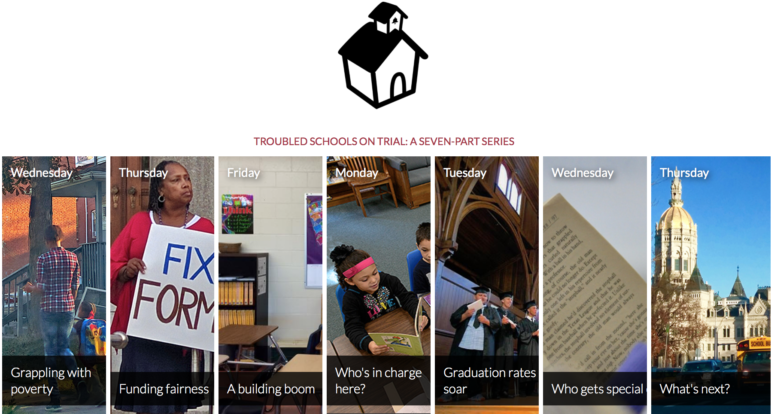 Barnes’s Thursday letter indicates the administration agrees with at least some of Moukawsher’s criticism of school construction spending and plans to push local educators to redistrict within their district or regionalize schools with nearby districts instead of building new schools.

“At a time when many school districts in the state continue to experience declining enrollment, we believe it is critical for districts to articulate their plans for schools throughout the entire district, in terms of enrollment and capacity, when applying for particular projects. If solutions lie with the redistricting of students and/or reconfiguring schools rather than building new schools or adding unnecessary capacity to a district, they should be strongly favored. We should also find new ways to encourage towns to join together to address their school facility needs,” Barnes wrote.

Barnes also urged legislative leaders to reject, or significantly scale back, picking up the bulk of the cost for new schools in two affluent communities, Greenwich and Washington. Those projects were recommended for approval by the Department of Administrative Services, which reviews construction project applications from districts and submits qualified projects for the legislature to consider.

“If solutions lie with the redistricting of students and/or reconfiguring schools rather than building new schools or adding unnecessary capacity to a district, they should be strongly favored. We should also find new ways to encourage towns to join together to address their school facility needs.”
Ben Barnes
budget chief for Gov. Dannel P. Malloy

That list – which totals $778 million in school construction projects – includes two schools that were at the center of the recent five-month school-funding trial. Barnes did not take issue with moving forward on those schools, Smalley Academy in New Britain and New London High School.

That increased reimbursement rate, passed by the legislature in 2011, was intended to incentivize better-off districts to regionalize and enroll students from nearby segregated districts. Connecticut comes in 13th and 14th place among the states for the segregation of its black and Hispanic students in public schools, reports UCLA’s Civil Rights Project.

Barnes doesn’t support Greenwich’s proposed project, however – a replacement for New Lebanon School that would enroll only Greenwich residents. Barnes said the state’s share – $29.8 million – was too expensive, pointing out it amounts to $106,979.21 per student. “Greenwich can afford to pay” for such a project itself, Barnes wrote.

This project, given the nod by the State Board of Education in 2014, aimed to address the racial imbalance of minority students in certain schools located only within Greenwich. Local educators would not consider at that time enrolling more minority students from its neighboring communities and regionalizing, labeling it in plans submitted to the state as “unacceptable means.”

The state education board will consider a separate proposal Wednesday for Fairfield Public Schools aimed at correcting the racial imbalance one of its schools has faced for years. One of the options is to expand some existing schools and enroll minority students from the other side of town at those schools.

“The state should not step in to pay for a new school – which may or may not solve the problematic racial disparity within the Greenwich school district,” Barnes wrote. “Given the stress on the state’s bonding costs and the need to target our spending as effectively as possible, we seek to expand our partnership in controlling those costs. This needs to start with legislative review of approvals for proposed school construction projects.”

Connecticut’s school-aged population is decreasing faster than that in nearly every state, reports the U.S. Department of Education. The most recent survey on school capacity conducted three years ago by the state education department found that 71 percent of high schools were less than 90 percent full, less than 85 percent of middle and elementary schools were full, and few schools were above capacity.

In the state’s most impoverished districts – Bridgeport, Hartford, New Haven, New London, New Britain, Waterbury, Windham – a lower percentage of schools had areas of their buildings rated as being in fair or excellent condition, according to the survey.

In the most affluent districts – Darien, Easton, New Canaan, Redding, Ridgefield, Weston, Westport, and Wilton – 88 percent of the schools either had been built in the last 20 years or had had a major renovation, compared to 71 percent in the high-poverty districts.

Judge Moukawsher, in his decision ending the school funding trial, ordered the state to overhaul how it provides funding for school construction projects. The state has filed a broad appeal appeal of Moukawsher’s ruling, and Attorney General George Jepsen argues in a brief filed with the Connecticut Supreme Court that the trial judge overstepped his authority with the school construction order and others that are part of his ruling.

Specifics on exactly what Malloy is proposing for a school construction program that largely directs state aid to impoverished districts may become clearer Wednesday during his State of the State speech, or in the coming weeks when he releases his proposed legislation for the General Assembly to consider.